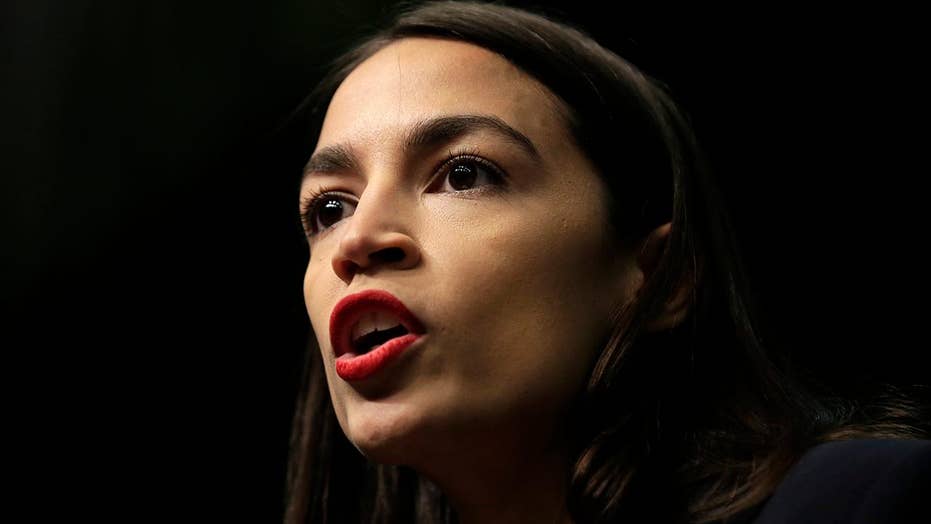 Organizers of the Protect Veterans Health Care at the VA town hall in New York featuring Rep. Alexandria Ocasio-Cortez tell Fox News that the event was at capacity, but video from inside the building tells a different story. 'Fox &amp; Friends Weekend' co-host and veteran Pete Hegseth sounds off on the rejection.

A top Republican congressman is firing back at Rep. Alexandria Ocasio-Cortez, D-N.Y., in response to her claim that the Department of Veteran Affairs provides “some of the highest quality care” to veterans.

“Apparently ignorance is bliss when it comes to Rep. Ocasio-Cortez and her views of VA,” Rep. Phil Roe, the ranking Republican on the Committee on Veterans’ Affairs, said in a statement to Fox News. “It is evident that she paid little attention to the scandalous treatment of veterans that occurred several years ago by some in the very agency created to serve them.”

Ocasio-Cortez claimed during a town hall last week that the VA “isn’t broken” despite the scandals that have plagued the agency over the last decade.

“All I can think of is that classic refrain that my parents always taught me growing up, is that: ‘if it ain't broke, don't fix it,’" she said in New York, as part of her argument against privatizing aspects of the agency.

"That is the opening approach we have seen when it comes to privatization, it's the idea that this thing that isn’t broken, this thing that provides some of the highest quality care to our veterans somehow needs to be fixed, optimized, tinkered with until we don’t even recognize it anymore," she said, in comments first reported by The Washington Examiner.

Rep. Phil Roe, R-Tenn., is calling out Rep. Alexandria Ocasio-Cortez, D-N.Y., for her comments about the VA. (Photo By Bill Clark/CQ Roll Call)

But Roe, R-Tenn., in his statement, said there has been “widespread recognition” from Democrats and Republicans that the department needed reform since the 2014 scandal that found secret wait lists, systemic neglect and veterans dying waiting to see a doctor. He noted that the MISSION Act was signed into law with bipartisan support in Congress and backing from veteran groups -- but said there remains “mountains of work ahead of us still.”

“While Rep. Ocasio-Cortez and I have VA medical facilities in and near our districts with great quality ratings, not all veterans are so lucky. That’s not to mention the many student veterans across the nation who struggled to pay their bills last fall due to VA’s failure to properly process their GI Bill benefits, or the many veterans who wait years for decisions on their disability claims,” he said.

“Problems and inconsistencies like that are the definition of a system that needs fixing,” he said. “I am baffled as to how Rep. Ocasio-Cortez fails to see that.”

Ocasio-Cortez did see some support from President Trump, however, who tweeted Wednesday: "Rep. Alexandria Ocasio-Cortez is correct, the VA is not broken, it is doing great. But that is only because of the Trump Administration. We got Veterans Choice & Accountability passed."

Roe was joined in his criticism of Ocasio-Cortez by Rep. Greg Steube, R-Fla., who also serves on the committee.

“From veterans waiting 30-60 days for an appointment, suicide hotlines going to voicemail, to the rationing of medicine and vast cost overruns, this Department is failing on multiple fronts,” he said in a statement. “To say that this is the level of care those who put their lives on the line to defend our nation deserve is frankly offensive.”

Steube noted that Ocasio-Cortez is a strong proponent of government-run, single-payer health care plans in her pushes for a Green New Deal and Medicare-for-all and suggests it is that ideological bent that leads her to view the VA in a positive light.

“As a partially disabled veteran who deals with VA frequently, I know that this department is in need of serious reform,” he said. “But, it doesn’t surprise me that Representative Ocasio-Cortez won’t admit it -- she advocates for government run health care for all every day, so if she were to admit the failures of the only current system of government run health care, she would have to admit faults within her own plan.”