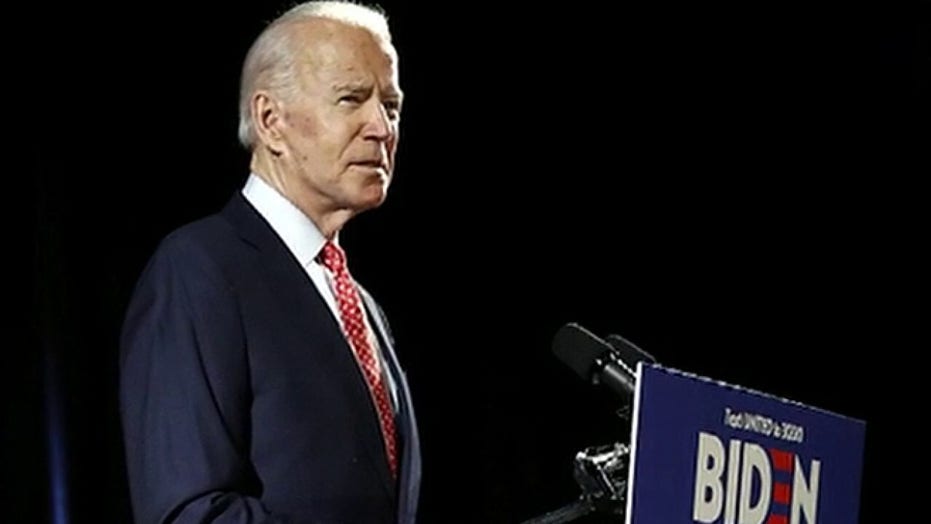 Was Biden's 'not very good people' remark his 'basket of deplorables' moment?

EXCLUSIVE: Top Joe Biden surrogate Terry McAuliffe told a videoconference meeting of Virginia Democrats over the weekend that the former vice president should remain in his basement -- where he has famously campaigned remotely during the coronavirus pandemic -- and that Democratic officials are broadly "preferring" that Biden stay out of the limelight.

Fox News has obtained a video of McAuliffe's Norfolk comments, which came after Biden has made a series of gaffes in his already-limited public appearances as he social distanced from home -- including by declaring that African-Americans who support President Trump "ain’t black."

"He's doing a lot of local," McAuliffe added. "He's talking to two, three governors a day. He's doing roundtables, Zoom calls. A lot of it's being done in those six battleground states that we have going forward."

Trump has hammered Biden repeatedly for remaining in his basement and has openly questioned whether Biden remains mentally competent. “I’d love to see him get out of the basement so he can speak,” Trump said in a telephone interview with Fox News last month.

Nevertheless, recent polls have shown Biden leading Trump, who is set to resume his trademark campaign rallies in the coming days. Biden himself has begun to travel again, including meeting privately in Texas on Monday with the family of George Floyd, whose death two weeks ago while in police custody has sparked nationwide protests.

In his comments, McAuliffe also assured the Democrats the 2020 election would be different than 2016's, when nominee Hillary Clinton was hampered over the FBI's investigation of her emails: "We're not gonna have crazy Jim Comey coming out 12 days before the election with that ridiculous thing he did."

But, McAuliffe conceded, "We're building the digital today, which Trump has a huge lead on, he's got like 88 million Twitter followers, so that's a big emphasis for us." McAuliffe also said during the video it's "likely" he'll run again for governor of Virginia in 2021.

Although Biden has been in his basement, his campaign has found ways to broadcast his message nationally. With an eye towards attracting younger votes, Biden's team has been putting portions of the presumptive Democratic nominee’s speech last week on the death of Floyd and the bigger issue of racial injustice into a new digital ad that it will run in key general election battleground states.

“The history of this nation teaches us that in some of our darkest moments of despair, we’ve made some of our greatest progress,” the former vice president says in the spot. “The 13th, 14th, and 15th amendments followed the Civil War, the greatest economic growth in world history grew out of the Great Depression, the Civil Rights Act of 1954 and the Voting Rights Act of ’65 came in the track of Bull Conner’s vicious dogs.”

Biden, however, has found himself in something of an awkward position, as left-wing activists push proposals -- including defunding all police -- that are nationally unpopular. The Fairfax, Virginia Democratic Party claimed last week that a "volunteer" was responsible for posting a message to the party's official Twitter account praising riots as an "integral part of this country's march towards progress," even as Biden and other top Democrats have sought to present more palatable solutions.

The tweet, which the Democrats deleted on Monday morning amid intense scrutiny, came after a night of chaos across America that injured dozens of federal officers and saw civilians beaten, churches torched, and stores looted.

The post read: "RT @bharatkrishnan9: When President Obama included the Stonewall Riots in his 2nd inaugural, he didn't make that decision lightly. Riots are an integral part of this country's march towards progress." (The letters "RT" are short for "retweet"; the Democrats were indicating that they were manually reposting a tweet from Bharat Krishnan, who self-identifies as an "author of political fantasy," rather than using Twitter's built-in reposting functionality.)

In a statement to Fox News, the Fairfax Democrats' party chairman, Bryan Graham, walked back the post.

"We support the right of peaceful protest and condemn violence," Graham said. " A volunteer retweeted a message on May 30 without the review of our organization’s leadership. When it was brought to our attention, the message was removed to reinforce that it is not a position of our Committee. We are revising our social media policies. Black lives matter."

For his part, Biden has condemned violence, but said he doesn't support defunding the police.