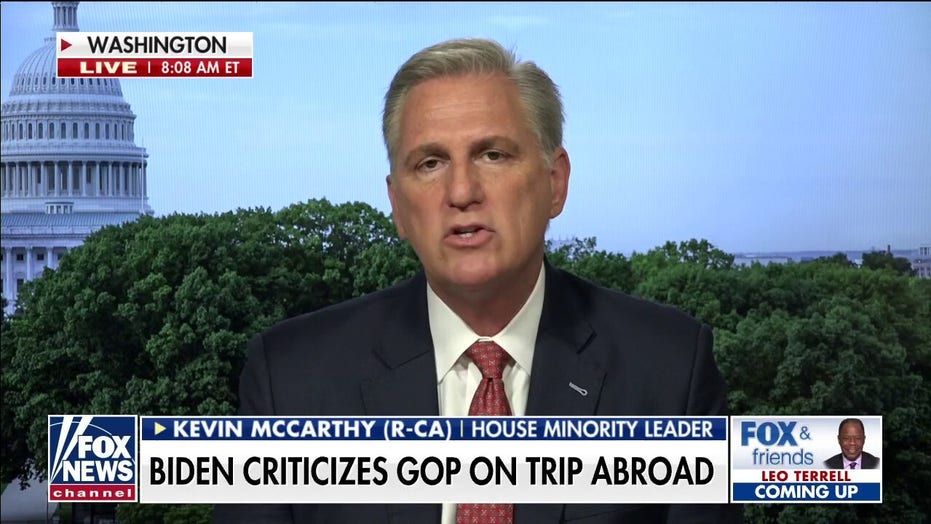 Kevin McCarthy: China, Russia are ‘stronger today’ because of Biden

EXCLUSIVE: Senator Tom Cotton, R-Ark., sent a letter to President Biden asking what the federal government’s plans are to ensure the safety and security of American athletes competing in the 2022 Beijing Winter Olympic Games.

Cotton sent the letter to Biden on Tuesday morning, asking for more information on "the U.S. government’s preparations" for the upcoming Winter Olympics in China and saying that, under normal circumstances, the federal government prepares "for years in advance of each Olympics to protect American athletes and guarantee U.S. media access."

The senator warned in the letter exclusively reviewed by Fox News that, unlike games "held in friendly, free nations," the Beijing-based games "will pose unique challenges for the safety, security, and privacy of Americans who attend."

"First, the Chinese Communist Party (CCP) operates the world's most invasive domestic surveillance system," the letter reads. "Chinese authorities closely monitor internet traffic within the country and block or censor online information that the Party views as adverse to its grip on power."

Cotton pointed out that the CCP "continuously tracks persons in Chinese cities through a network of facial-recognition cameras and other advanced sensors." He also advised American athletes to "expect" for their rooms to be bugged by Chinese state-owned "audio or visual surveillance equipment" and for "all their onshore electronic devices to be hacked by Chinese authorities."

The senator wrote that "the CCP also considers DNA collection a vital intelligence-gathering objective" and that the Chinese government "has reportedly conducted tests to develop biologically-enhanced soldiers and intends to use DNA data to catapult Chinese biotechnology companies to global market dominance."

"In 2022, thousands of world-class athletes will gather to compete in China. Their DNA will present an irresistible target for the CCP," he warned. "Thus, we should expect that the Chinese government will attempt to collect genetic samples of Olympians at the Games, perhaps disguised as testing for illegal drugs or COVID-19."

The Arkansas Republican also raised the concern that China might "arbitrarily" detain Americans and other Western visitors and use the individuals as political bargaining chips. Cotton also pointed out the fact that the State Department labels China under a Level 3 Travel advisory — urging Americans to reconsider travel — "because of the Chinese government's use of arbitrary detention and exit bans."

POMPEO: CHINA DOES NOT DESERVE TO HOST 2022 WINTER OLYMPICS DUE TO ‘EERIE SIMILARITIES’ WITH NAZI GERMANY

"Members of the U.S. Olympic delegation could be subject to arbitrary detention in China, particularly those who have spoken out against the Communist Party's genocide of the Uyghurs, repression in Tibet, and takeover of Hong Kong." Cotton warned.

"Given these risks to the American delegation, the U .S. government and U.S. Olympic Committee must thoroughly prepare to ensure the safety and security of all Americans traveling to the 2022 Beijing Olympic Games," the senator wrote.

Cotton concluded the letter by asking the president to answer a series of questions regarding the Chinese government’s cooperation to allow U.S. media access and with the federal government to "mitigate security risks and provide logistical support" before the U.S. delegation arrives in Beijing.

The letter comes as Cotton and other prominent conservatives have stated their opposition to the 2022 Beijing Winter Olympic Games, with Rep. Michael Waltz, R-Fla., introducing a resolution in February urging America to boycott the games entirely. The lawmakers cited human rights concerns, such as the genocide of Uyghur Muslims in the Xinjiang Uyghur Autonomous Region, for the reason behind their boycott.

"Well, what's happening in the 1930s is happening in western China today. There are eerie, eerie similarities between the two, and hosting the Olympic Games — as the Germans were able to do in 1936 — gave great credibility to that regime," Pompeo said.

"We ought not to permit that to happen. The International Olympic Committee has a responsibility to make sure that host for these games deserve it," the former Cabinet secretary added. "This regime certainly does not."