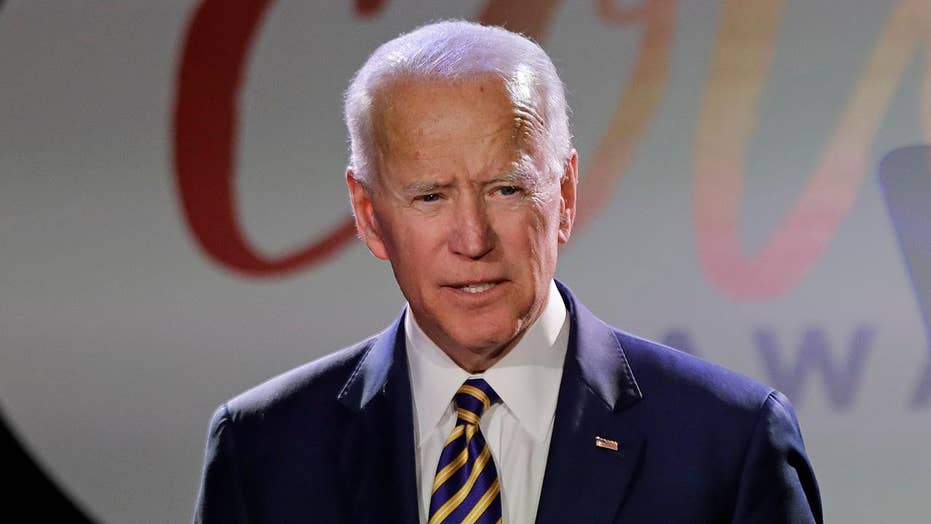 In an article published late Wednesday in The Washington Post, Vail Kohnert-Yount charged that when she was an intern in the White House in 2013, Biden approached her to introduce herself.

“He then put his hand on the back of my head and pressed his forehead to my forehead while he talked to me," Kohnert-Yount told The Post. "I was so shocked that it was hard to focus on what he was saying. I remember he told me I was a ‘pretty girl.'"

Although Kohnert-Yount said she did not consider Biden's behavior to be "sexual assault or harassment,” she added that "it was the kind of inappropriate behavior that makes many women feel uncomfortable and unequal in the workplace.”

Earlier on Wednesday, Biden -- who is widely expected to enter the 2020 presidential race soon -- responded to a series of other misconduct allegations leveled against him by promising to “be more mindful about respecting personal space in the future.”

BIDEN IS 'READY TO KILL BERNIE,' AMID ALLEGATIONS SANDERS TEAM MAY BE LEAKING ALLEGATIONS TO SABOTAGE HIM

Biden also acknowledged the allegations in a tweeted video.

Responding to Biden's comments, Kohnert-Yount told The Post: “I appreciate his attempt to do better in the future, but to me this is not mainly about whether Joe Biden has adequate respect for personal space. It’s about women deserving equal respect in the workplace.”

PELOSI GIVES BIDEN SOME ADVICE TO AVOID FUTURE PROBLEMS: PRETEND YOU HAVE A COLD AND STAY AWAY

A second woman, Sofie Karasek, told The Post that Biden acted inappropriately when he placed his forehead against hers following the Oscars ceremony in 2016. Karasek had appeared on-stage with 51 other people who said they had experienced sexual assault. A photograph of the incident is widely available online.

In his comments Monday, Karasek said Biden “still didn’t take ownership in the way that he needs to.”

Biden "emphasized that he wants to connect with people and, of course, that’s important," Karasek said. "But again, all of our interactions and friendships are a two-way street. . . . Too often it doesn’t matter how the woman feels about it or they just assume that they’re fine with it."

Finally, Ally Coll said Biden squeezed her "for a beat too long" while she was a staffer organizing a reception for Democrats in 2008. She now runs the Purple Campaign, a nonprofit devoted to combating sexual harassment.

On its website, the Purple Campaign stated: "Courageous women have broken the silence by sharing their experiences with sexual harassment in the workplace, exposing a systemic problem that exists across every industry. Now we must work together to create lasting change."

The page continued: "The Purple Campaign’s mission is to end workplace sexual harassment by implementing stronger corporate policies, establishing better laws and empowering people to create lasting change within their own workplaces and communities."

Coll told The Post that while Biden's behavior didn't concern her at first, over time she came to realize it was inappropriate.

She told The Post that Biden's video illustrated "a continued lack of understanding about why these stories are being told and their relevance in the #MeToo era.”

Other allegations against Biden surfaced Tuesday from two women who spoke to The New York Times. One of the claims dated from 2012, while the other encounter was said to have taken place a few years later.

In the second incident, former college student Caitlyn Caruso told the paper that Biden "rested his hand on her thigh — even as she squirmed in her seat to show her discomfort — and hugged her 'just a little bit too long' at an event on sexual assault at the University of Nevada at Las Vegas," as the paper reported. Caruso, now 22, said she was 19 at the time and had just recounted her own story of sexual assault.

On Monday, Amy Lappos, a former aide to Rep. Jim Himes, D-Conn., told the Hartford Courant that Biden touched her face with both hands and rubbed noses in 2009. Late last week, former Nevada politician Lucy Flores -- who campaigned for Bernie Sanders and served on the board of an activist group aligned with Sanders -- wrote that Biden had grabbed her shoulders, smelled her hair and kissed her on the back of her head at a campaign event in 2014.

A former Sanders staffer told Fox News on Wednesday that Flores is a "racist" and a "fraud."