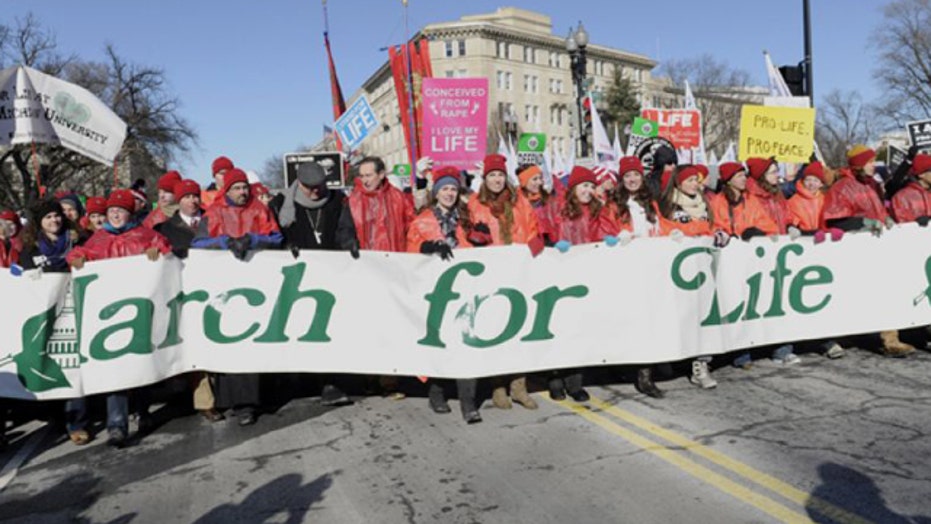 Could abortion be a winning issue for Republicans?

Thousands brave cold for March for Life rally in Washington

Thousands of abortion opponents confronted wind chills in the single digits Wednesday to rally and march on Capitol Hill to protest legalized abortion, with a signal of support from Pope Francis.

The annual "March for Life" is held every January on the anniversary of the Supreme Court's landmark 1973 decision that declared a constitutional right to abortion. The event draws many Catholic high school and college students from across the country for a series of events and prayer vigils that led up to a rally and march on the snow-covered National Mall.

Francis, who has emphasized a broader focus on poverty beyond divisive issues, sent his support for the anti-abortion march.

"I join the March for Life in Washington with my prayers," the pope tweeted. "May God help us respect all life, especially the most vulnerable."

President Barack Obama also issued a statement Wednesday, saying the 41st anniversary of the Supreme Court's Roe v. Wade decision is a chance to "recommit ourselves to the decision's guiding principle: that every woman should be able to make her own choices about her body and her health."

The president also said the nation should resolve to protect a woman's access to health care, her right to privacy and to reduce the number of unintended pregnancies.

The theme of this year's march is "Adoption: A Noble Decision," as an alternative to abortion, organizers said.

Abortion protesters came from Georgia, Missouri, Pennsylvania and beyond. The crowd included many young people, including high school and college students from Chicago, Cleveland and elsewhere. Many held signs that read "(hash)TeamLife."

While there were mostly cheers and upbeat chants, the crowd booed when House Majority Leader Eric Cantor of Virginia said there had been an expansion of abortion coverage in the nation's health care overhaul.

Beverly Miller, 39, of Mankato, Minn., made her first trip to join the march with her 15-year-old son Joseph and youth from their church. Her local diocese rented buses and drove 20 hours to the nation's capital.

"When we get together in a group like this and we see that there's hundreds of thousands of other people like us, it gives us strength and courage and hope that we aren't alone. If we stand together, we really can make a difference," she said.

The march began on the National Mall with a rally. Then protesters marched along Constitution Avenue to Capitol Hill and the Supreme Court.