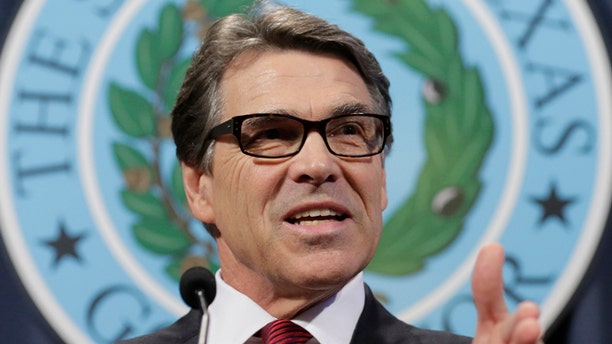 Former Texas Gov. Rick Perry was cleared Wednesday of all criminal charges against him related to allegations he misused his power while in office.

In a 6-2 ruling, the Texas Court of Criminal Appeals dismissed the abuse-of-power charge that had loomed over the former Republican governor -- including during his short-lived presidential campaign, which ended last September.

The charge was filed after Perry threatened – and then carried out – a veto of state funding for a group of public corruption prosecutors after the Democratic head of the unit refused to resign.

In the ruling , the court said veto power cannot be restricted by the courts and that prosecution of a veto “violates separations of powers.”

Perry’s lawyer, Tony Buzbee, told The Associated Press it is “a shame that it took that long to get something as weak and misguided as this to be dismissed.”

In July, a lower appeals court dismissed another charge -- coercion by a public servant – against Perry.

Perry, the longest-serving governor in Texas history, left office in January 2015 while facing the felony indictment handed down the previous summer by a grand jury in Austin, a liberal bastion in otherwise mostly deeply conservative Texas.

The former governor made just one court appearance in the case, which stems from 2013, when he publicly threatened to veto the $7.5 million in state funding for Public Integrity Unit prosecutors. Travis County District Attorney Rosemary Lehmberg, who headed the investigative group, had rebuffed Perry's calls to resign after she was convicted and jailed for drunken driving.

Perry dismissed the case as a "political witch hunt," while legal scholars from across the political spectrum raised objections about it. Still, the Republican judge overseeing the case repeatedly refused to throw it out on constitutional grounds, prompting Perry's appeals.

One of the judges who dissented in Wednesday's ruling, Republican Cheryl Johnson, said the decision could leave the public with an uneasy perception that the system went out of its way to clear one of the most powerful governors in Texas history.

"The constant references to 'Governor Perry' could well be seen by the public as an inference that appellant's position in life entitles him to special privileges and special treatment by this court that others might be denied," wrote Johnson, referring to how judges addressed Perry during deliberations.

Michael McCrum, the San Antonio-based special prosecutor who secured Perry's indictment, long maintained that the matter was built on evidence — not politics — and deserved to go to trial. He can appeal, but that would be a lengthy process. Combined, the original charges carried a potential maximum penalty of 109 years in prison.

Despite his legal problems, Perry formally announced he was running for president in early June, hoping to convince GOP primary voters he deserved a second chance after his 2012 bid was undone by a series of public gaffes. But his second White House campaign lasted barely three months, and Perry formally dropped out of the race in September.

The former governor spent more than $2 million on top defense lawyers. His latest White House campaign raised barely half that much in its first month, and it quickly became so cash-strapped that it could no longer afford to pay staffers in key states with early presidential primaries or caucuses.

Perry blamed the criminal indictment for his sluggish fundraising. But polls showed he was badly trailing in the race despite numerous visits to Iowa, New Hampshire and South Carolina. He was the first candidate leave a GOP field jammed with 17 presidential hopefuls at the time.