The Border Patrol agents who blocked Haitian migrants from entering the U.S. via the border at Del Rio, Texas, and who are now at the center of a Democratic controversy over false claims about their use of "whips" while on horseback, have been shifted to desk duty pending an investigation.

Homeland Security Secretary Alejandro Mayorkas, who initially backed the agents before changing his stance amid outrage from the White House and left-wing Democrats, told a House Committee that the agents had been taken off the frontlines amid an investigation that he expected to take days, rather than weeks.

"We have ensured that the individuals during the pendency of the investigation are not conducting law enforcement duties to interact with migrants, but rather are conducting only administrative duties," he said.

"The facts will drive the actions that we take," he said. "We ourselves will pull no punches and we need to conduct this investigation thoroughly, but very quickly. It will be completed in days, if not weeks."

The controversy began with the emergence of images showing agents on horseback blocking Haitian migrants from entering the U.S. in a Del Rio riverine, and in one case grabbing onto a migrant’s shirt.

However, some media outlets and Democratic lawmakers misidentified the agents’ split reins, which they use to control the horse, as "whips" and accused the agents of whipping the migrants. Some outlets later qualified their description as "whip-like cords" but many Democrats forged ahead with the claim.

House Speaker Nancy Pelosi condemned what she described as "the inappropriate use of what appear to be whips by Border Patrol officers on horseback to intimidate migrants."

Senate Majority Leader Chuck Schumer decried "images of inhumane treatment of Haitian migrants by Border Patrol—including the use of whips." 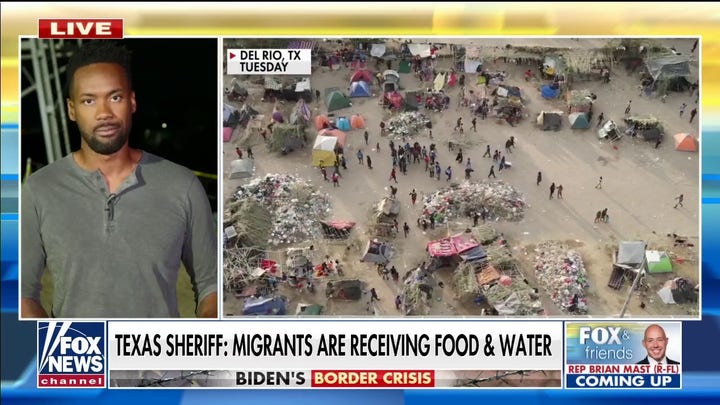 "What I saw depicted about those individuals on horseback treating human beings the way they were, was horrible," Harris told reporters.

Mayorkas and Border Patrol Chief Raul Ortiz both said on Monday that they did not see anything wrong with the images, and Mayorkas pointed out agents use long reins to control their horses, not whips, in difficult terrain. Ortiz also noted that agents don't know who are smugglers and who are migrants.

Ortiz said it is important that agents need to maintain control of the horse to avoid injuries to both agents and migrants, and said working a horse in a riverine is a very difficult task.

But later in the day, Press Secretary Jen Psaki said: "I don't think anyone seeing that footage would think it was acceptable or appropriate."

By Tuesday morning, Mayorkas had changed his message on the images.