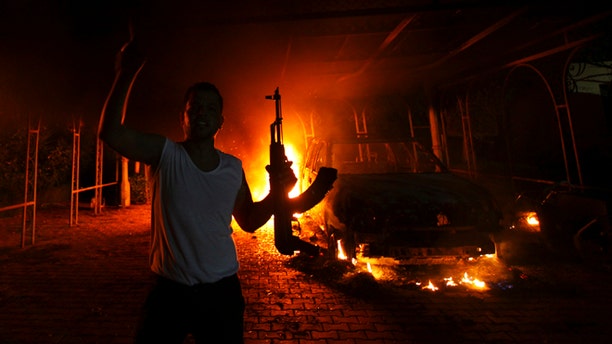 Sept. 11, 2012: A protester reacts as the U.S. Consulate in Benghazi is seen in flames during a terrorist attack which claimed the lives of four Americans. (Reuters)

New classified testimony on Benghazi by five CIA employees shows the administration's initial narrative about a protest gone awry was "indefensible," according to a lawmaker who took part in two classified sessions before the House Intelligence Committee.

Rep. Peter King, R-N.Y., told Fox News that witnesses described how five mortars rained down on the CIA annex over 90 seconds during the attack -- with three direct hits. King argued that the details raise more questions about why the administration initially claimed the attack sprung from a protest over an anti-Islam film – a narrative officials later abandoned.

"It's indefensible what was said back on September 11, 12, and 13 in 2012, and what the facts really were," King said. Two other members of the intelligence committee involved in the briefings echoed King’s assessment.

This testimony is seen by lawmakers as more overwhelming evidence that the attack was premeditated terrorism and that these facts were known almost immediately by then-CIA Director David Petraeus – who downplayed the skill and planning needed to use mortars with such accuracy during his Sept. 14, 2012 briefing to Congress.

This week, as the House Intelligence Committee reviews transcripts of the FBI interviews with Benghazi survivors to investigate discrepancies in the timeline, Fox News has learned new details which paint a picture of the State Department personnel at the consulate as "woefully unprepared" to respond to the assault.

Lawmakers were told that when the CIA team arrived from the annex -– about 30 minutes after the attack began -- some of the State Department employees were not carrying weapons, and one of the men was not wearing shoes.

Fox News has also obtained a new letter that will be sent to all members of the Senate Tuesday by Sen. Ted Cruz, R-Texas.  In the “Dear Colleague” letter, Cruz calls on his fellow lawmakers to join the 24 senators who already support an independent commission on Benghazi – Senate Resolution 225.   Attached to the Cruz letter is a statement from the family of Sean Smith, who was killed in the attack.  Smith’s mother Pat states that she continues to be denied answers by the State Department because she is not considered “immediate family.”

And his uncle, Michael Ingemire, writes passionately that history will judge the Congress a failure unless it acts.  “A failure to establish an atmosphere of truth and accountability about Benghazi sends a simple and directly dangerous message to countries that do not have America’s best interests at heart.  The failure of Benghazi tells our enemies you can kill American citizens and civil servants and not face any consequences.”