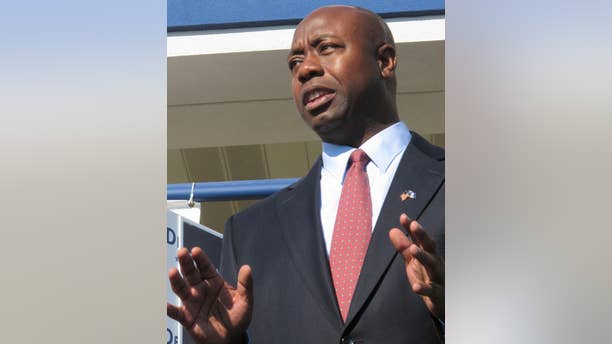 In an Oct. 19, 2010 photo, Tim Scott, Republican candidate for the U.S. House in South Carolina's 1st District, speaks to a crownd during a campaign event in North Charleston, S.C. (AP Photo/Bruce Smith)

The Republican Party is hoping to put a record number of African Americans in Congress after Tuesday's election; despite the fact the first black president is highly unpopular within the party.

Fourteen black Republicans are running for U.S. House seats this midterm election cycle, and one of the most likely candidates is Tim Scott, a South Carolina state representative and former Charleston County Council Chairman.

With only token opposition in his heavily Republican district, Scott seems poised to become the Palmetto State's first black GOP congressman since Reconstruction and the first African-American Republican in Congress since J.C. Watts left in 2003 to run for the Senate.

If elected, Scott has vowed to fight to reduce funding for President Obama's health care overhaul policies, which he described as "a jobs killer."

Scott's views echo those of many fiscal conservatives, who accuse the Republican establishment of giving lip service to the party's mantra of less public spending and limited government. It is this political climate that may help conservative African Americans make inroads in a still predominately white GOP. Many of these minority candidates are reaching out to "Tea Party" conservatives.

"The Tea Party people are not daft on gender and I don't think they're daft on race," said Neal Thigpen, a political science professor at Francis Marion University in Florence, South Carolina. "They tend to be economic conservatives."

Scott said he is proud to be the face of a growing minority presence in the GOP. But he said it's his ideas that keep getting him elected.

"We want a big tent with stronger values," Scott said. "We cannot dilute our values to have a bigger tent. That is not building a better conservative party. I am more of a conservative than I am a Republican."

Although the GOP fray has become more ethnically diverse, black candidates does not necessarily translate to black Republican voters.

"Overall, the African American community will still more closely identify with the policies of the Democratic Party -- mostly because of socioeconomic status and the economic policies they offer," said Kendra Stewart, a political science professor at the College of Charleston. "Regardless of race and gender, people still tend to vote the issues."

"As we see the African American community become more of a middle class community, that's when we start to see the change in the stronger identification with the Republican Party rather than the Democratic Party," she said.

Scott grew up in poverty as the son of a single mother in North Charleston. But he said his mother taught him self-reliance by example.

"My mom decided to work 16 hours a day to keep us off Welfare," Scott said. "She felt like optimism and discipline would change my circumstances faster than the government could or would."