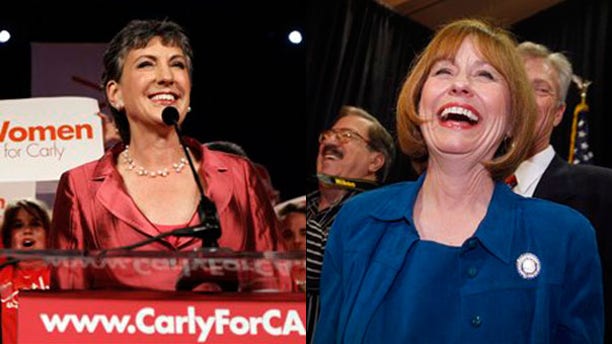 The primary elections Tuesday amounted to a night of messages -- from the Tea Party, from female candidates and for the Democrats.

With hundreds of primaries held across 11 states, a number of candidates made history while others pulled out come-from-behind wins. The elections helped set the stage for a November general election in which incumbents are girding for a series of hard-fought battles.

In California, the Republican Party has placed two women at the top of its ticket for the first time, nominating former Hewlett-Packard CEO Carly Fiorina for Senate and former eBay CEO Meg Whitman for governor.

Fiorina told Fox News on Wednesday that she's been "itching" for the general election fight against incumbent Democratic Sen. Barbara Boxer for a while.

"It really feels great to be here on Wednesday morning and able to take her on ... As of today, game on, Barbara," she said.

State Rep. Nikki Haley moved a step closer to her goal of becoming South Carolina's first female governor, advancing into a runoff with her top competitor. After a bruising primary in which two men claimed they had affairs with her, Haley blew away her competition with 49 percent of the vote; she was forced into a runoff with Rep. Gresham Barrett, who won 22 percent, only because she did not clear the 50-percent threshold.

The big save of the night came in Arkansas, where Sen. Blanche Lincoln defied expectations by beating Democratic primary challenger Lt. Gov. Bill Halter in a runoff. She moves on to a tough general election battle for her seat.

And in Nevada, Tea Party-backed candidate Sharron Angle claimed a decisive victory after surging in the polls against a more established GOP competitor in the final weeks of the race.

Angle will face off against Senate Majority Leader Harry Reid in the fall. Though polls have shown Reid's popularity at rock-bottom levels, Democrats are overjoyed that Angle won, saying her conservative stances on the issues are far outside the mainstream

Angle, in her victory speech, thanked the Tea Party for its support and promised Reid a tough race.

Other top Democrats are in for a challenging contest in November following the results of Tuesday's elections.

While Boxer will face off against Fiorina, former Gov. Jerry Brown, seeking to reclaim his old job, is poised to battle Whitman.