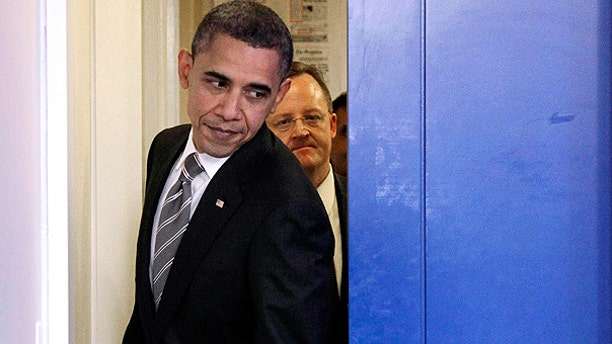 Dec. 7: President Obama, followed by White House Press Secretary Robert Gibbs, slides past the pocket door to the briefing room as he walks out to begin his news conference at the White House in Washington. (AP)

WASHINGTON -- The tax deal struck by President Obama and congressional Republicans essentially gives Americans a pay raise -- pumping money into the economy almost immediately and probably creating hundreds of thousands of jobs over the next two years, economists say.

The compromise already has economists raising their forecasts for growth next year, mainly because it includes a surprising one-year cut in Social Security taxes. The amount of that cut -- 2 percent of pay for most American workers -- instantly becomes more take-home money. Critics complain that the deal would further swell the $1.3 trillion federal budget deficit.

Two central parts of the agreement extend income-tax cuts that would have expired Dec. 31 and renew benefits for the long-term unemployed. Those were both expected. But they still give a psychological boost to shoppers in the midst of the holiday shopping season.

The certainty that income-tax cuts will now remain for at least another year could also reassure Americans and businesses to spend more in 2011 and help rejuvenate the still-sluggish economy.

"It will ensure the economic recovery evolves into a self-sustaining economic expansion," said Mark Zandi, chief economist at Moody's Analytics. "Prior to this, I was less sure of that."

Zandi noted that the plan doesn't only put more money in people's pockets. It also gives businesses more incentives to invest by increasing tax write-offs for new equipment. Zandi has raised his forecast for economic growth next year from 2.7 percent to 4 percent. Economists at JPMorgan Chase have raised theirs from 3 percent to 3.5 percent.

Their old projections had assumed that Congress would approve only an extension of the income-tax cuts Congress enacted in 2001 and 2003.

"It will make a real difference in the lives of the people who sent us here," Obama said Tuesday at a news conference in which he defended concessions he made to Republicans as part of the tax-cut compromise.

Under the deal, the president and the GOP agreed to extend benefits for the long-term unemployed for 13 more months. That aid had expired Nov. 30. Up to 2 million unemployed people would have run out of benefits by year's end.

Economists note that cutting Social Security taxes and extending unemployment benefits are among the most effective ways that policymakers can energize the economy. Both steps free up more cash for low- and moderate-income families who are most likely to spend it.

The activist group Citizens for Tax Justice estimates that the plan would save the average taxpayer just under $3,000 next year. The top 1 percent of earners would save nearly $77,000 on average. And the poorest 20 percent would get an average tax break of just $396.

Economists at Deutsche Bank say the Social Security tax cut alone would increase economic growth by 0.7 percent next year. The Center for American Progress estimates that it would create 720,000 jobs within two years.

On long-term unemployment aid, the Labor Department says every $1 spent generates $2 in economic growth. The Center for American Progress predicts that extending those benefits through next year will generate or save 520,000 jobs.

The White House and Republicans also agreed to extend tax breaks to low-income families. And businesses will be able to write off 100 percent of their investments in equipment next year, up from 50 percent.

The deal also limits the estate tax to 35 percent of estates on any value above $5 million. Obama had wanted to impose a 45 percent tax on estates starting at $3.5 million. Michael Linden, a tax policy specialist at the Center for American Progress, estimates that only about 3,200 estates a year would have to pay estate taxes under the plan.

"There's no question that people at the top will receive a much, much larger per-person benefit" from the tax plan, Linden says.

The deal should also ease both political and economic pressure on the Federal Reserve and its embattled chairman, Ben Bernanke. Last month, Bernanke pushed the Fed to start buying $600 billion in government bonds to try to help stimulate the economy. That decision came under fire from Republican leaders on Capitol Hill. Some said they feared the Fed's action will spur inflation and lead to speculative buying on Wall Street.

Bernanke acted at a time when Congress seemed unlikely to approve any new stimulus money for the economy. But the new agreement, especially the Social Security tax cut, amounts to a stimulus by another name.

Now the spotlight will turn to Congress and tax cuts. And critics are warning that the plan could push the federal budget deficit to new record highs.

Analysts at BNP Paribas estimate the cost of the package at $1 trillion over two years. That would increase the federal deficit in the 2012 budget year from 6.9 percent of the nation's gross domestic product to what BNP calls a "much scarier" 9.8 percent.

Some critics said the scope of the tax-cut deal seems jarring at a time when the leaders of a presidential deficit commission have just proposed a mix of spending cuts and tax increases to slash the budget over the coming decade.

"This feels more than a bit surreal," said Maya MacGuineas, president of the Committee for a Responsible Federal Budget. "It's utterly exasperating."

Congress still must approve the plan. And many liberals are balking at extending the tax cuts for the highest-earning taxpayers at the cost of even larger deficits.

Congress should "not lower taxes for people who are already extraordinarily wealthy and increase the national debt that our children and grandchildren would have to pay,"' said Sen. Bernie Sanders, I-Vt., said

Analysts expect the plan to pass anyway because of how fragile the economy remains.

"Raising taxes on everybody in January would have put a real dent in the economy," said John Silvia, chief economist at Wells Fargo.