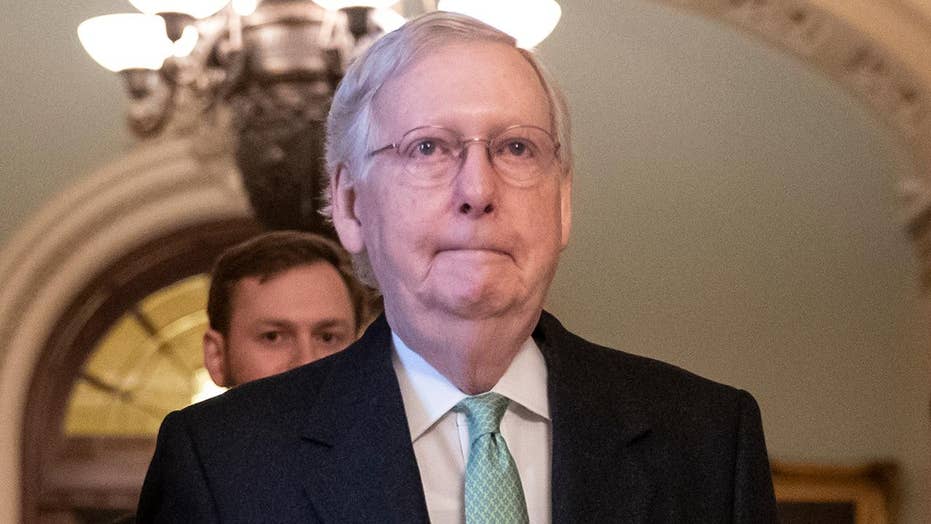 Republicans are coming to the defense of Senate Majority Leader Mitch McConnell after Democrat Sen. Chris Van Hollen suggests the Senate impeachment trial may not be fair.

Maine Sen. Susan Collins, a centrist who is among the nation's most vulnerable Republicans up for reelection in Congress, said Monday she was open to calling witnesses as part of the Senate impeachment trial of President Trump -- but added that it would be "premature" to decide who should be called until senators see the evidence presented.

The 67-year-old Collins, speaking to Maine Public Radio, also faulted Massachusetts Democratic Sen. Elizabeth Warren for saying Trump should be found guilty and removed from office. At the same time, Collins criticized Senate Majority Leader Mitch McConnell, R-Ky., for telling Fox News he would act in "total coordination" with the White House and the Senate during the impeachment trial.

McConnell said last week that he was not ruling out calling witnesses in Trump's impeachment trial, but he indicated he was in no hurry to seek new testimony.

"It is inappropriate, in my judgment, for senators on either side of the aisle to prejudge the evidence before they have heard what is presented to us,'' Collins said in the interview. Senators take an oath to "render impartial justice" during impeachment — an oath lawmakers should take seriously, Collins said.

"There are senators on both sides of the aisle, who, to me, are not giving the appearance of and the reality of judging that's in an impartial way,'' she said.

A swift and controlled Senate trial with no witnesses would likely benefit Collins in Maine, where Republicans adore Trump but independents are divided. Democrats have targeted Collins for her votes for Supreme Court Justice Brett Kavanaugh and the GOP tax cut. They have also sought to link her to Trump, who is reviled by many in the state’s populous south, anchored by liberal Portland, but cheered in the rural north.

Collins' comments came as Democratic presidential candidate Joe Biden sent mixed signals on whether he'd comply with a possible subpoena from Senate Republicans, who have sought to defend Trump's stated concern over Biden's dealings in Ukraine when he was vice president.

Some former Trump administration officials refused to appear during the House impeachment proceedings at the White House's instruction, prompting Democrats to formally accuse the White House of obstruction. Should Biden similarly refuse to testify, he would open himself to a similar line of attack at the height of the 2020 campaign season.

McConnell has left little doubt that he would like to exploit a Senate trial for political purposes and has openly characterized impeachment as a purely partisan process. He noted, for example, that Democrats in the House denied several GOP witness requests, denied the White House an opportunity to defend itself before the House Intelligence Committee, and conducted hearings in secret for only a handful of members.

Collins is the second Republican senator to criticize McConnell. Alaska GOP Sen. Lisa Murkowski, another moderate, said last week that she was “disturbed” by McConnell's comments, adding that there should be distance between the White House and the Senate in how the trial is conducted.

"There are senators on both sides of the aisle, who, to me, are not giving the appearance of and the reality of judging that's in an impartial way."

“To me, it means that we have to take that step back from being hand in glove with the defense, and so I heard what Leader McConnell had said, I happened to think that that has further confused the process,” Murkowski said.

Even as Congress remains on recess and with impeachment proceedings in limbo, new developments have emerged that could change how the eventual trial plays out. On Monday, Senate Democratic leader Chuck Schumer, D-N.Y.., hailed as a “game changer” a news report detailing the role of White House officials in withholding aid to Ukraine, a key element of the impeachment effort.

The New York Times reported new details about efforts by acting White House chief of staff Mick Mulvaney and other officials to cut off the aid to Ukraine. Senate Democrats are seeking to call Mulvaney and three other White House officials as witnesses in the impeachment trial.

“Simply put: In our fight to have key documents and witnesses in a Senate impeachment trial, these new revelations are a game changer,'' Schumer said. ”Will the Senate hold a fair trial, or will it enable a cover-up?"

House Democrats have not yet sent their articles of impeachment to the Senate for trial, prompting some legal experts -- including a Democratic impeachment witness -- to say Trump has not yet been impeached at all.

However, the Republican legal expert disagreed, saying Trump has in fact been impeached.