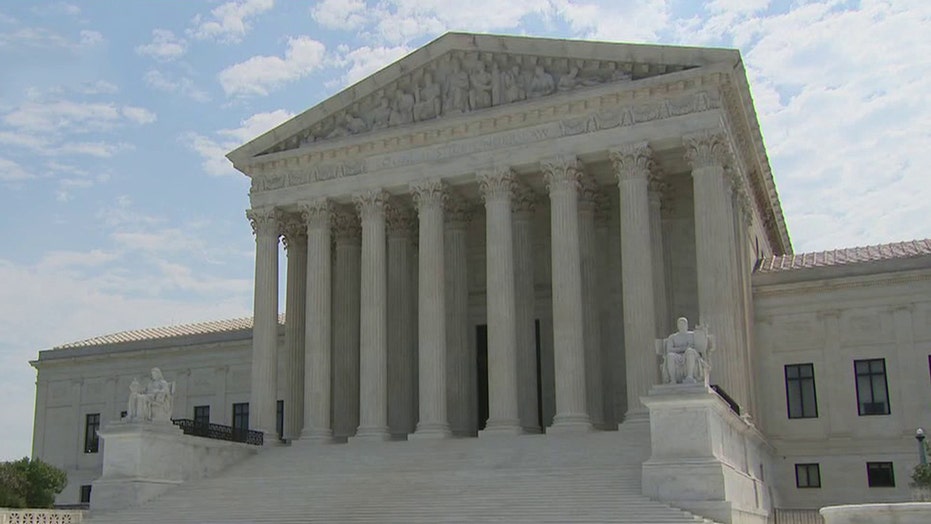 The Supreme Court on Monday upheld state laws requiring those chosen for the Electoral College to back the popular winner in their state's presidential race, a rebuke of a group of so-called "faithless" presidential electors in Washington and Colorado who sued after they were sanctioned for voting contrary to pledges they took before becoming electors.

In a 9-0 ruling, the court said that those sanctions -- in Washington a fine and in Colorado being removed and replaced as an elector -- are constitutional.

The cases come after a group of Democratic electors that called themselves the "Hamilton Electors" voted for moderate Republicans instead of Hillary Clinton in 2016, in an unsuccessful effort to convince Republican electors to vote for somebody besides President Trump.

MEET THE FAITHLESS ELECTORS: HOW A CALL BETWEEN A TECH WORKER AND A JAMBA JUICE EMPLOYEE TURNED INTO A SUPREME COURT CASE

"Among the devices States have long used to achieve their object are pledge laws, designed to impress on electors their role as agents of others," Justice Elena Kagan wrote in the court's opinion. "That direction accords with the Constitution—as well as with the trust of a Nation that here, We the People rule.”

Though many voters don't realize it, when Americans cast their ballots in presidential elections they are actually voting for "electors" who later cast the official ballots that decide the presidential election. They almost always rubber-stamp the popular vote winner in their state, but at times have voted for a different candidate, as the Hamilton Electors did in 2016.

"Ultimately it is really about reflecting the will of the voters who participated in the election," Washington Secretary of State Kim Wyman said in an interview with Fox News in an interview ahead of the oral arguments in the case. "And it is the state's determination of ensuring that those voters are represented in the Electoral College, and it is a state's right and it's a state's function."

The Monday ruling does not completely bar the possibility that there could be faithless electors in the future -- the court ruled that states can require their electors to vote for the popular winner, not that they must.

The case Kagan wrote the opinion for is called Chiafalo v. State of Washington. In that case, the justices upheld the ruling of the Washington Supreme Court. In an unsigned opinion, citing the reasoning of the Chiafalo opinion, the justices separately overturned the 10th Circuit Court of Appeals' ruling that states could not enforce elector pledges, in a case named Colorado Department of State v. Baca.

Kagan added: "The Constitution’s text and the Nation’s history both support allowing a State to enforce an elector’s pledge to support his party’s nominee—and the state voters’ choice—for President."

Kagan cited the appointments power in Article II, Section 1 of the Constitution, which she said "gives the States far-reaching authority over presidential electors, absent some other constitutional constraint." Such a constraint, Kagan wrote, does not exist in the Constitution.

"The Constitution is barebones about electors," she said. "Article II includes only the instruction to each State to appoint, in whatever way it likes, as many electors as it has Senators and Representatives."

The lawyers for the electors argued that the name of their office -- "elector" -- and the fact the Constitution says they "vote" by "ballot" implicitly means that the electors must have discretion once they are seated, and that a state cannot sanction them for voting against their pledges -- like how a state may not sanction a U.S. senator for violating a campaign promise. Kagan and a unanimous Supreme court disagreed.

"Suppose a person always votes in the way his spouse, or pastor, or union tells him to," Kagan wrote. She also cited other voting scenarios, like "proxy voting" or elections where there is only one choice: "[C]onsider an old Soviet election, or even a downballot race in this country."

"Yet if the person in the voting booth goes through the motions, we consider him to have voted," she wrote.

Members of both parties feared that if the Supreme Court did not issue a ruling on the faithless electors issue, a close election in 2020 could see just a handful of electors move to sway the result.

"To imagine the issue being teed up in the middle of an actual election, and forcing the Supreme Court to decide the issue where its decision would be picking a president, it would be Bush v. Gore on steroids," Harvard Law professor Lawrence Lessig, who argued the Hamilton Electors' case before the Supreme Court, told Fox News.

Michale Baca of Colorado and Bret Chiafalo of Washington were two leaders of the Hamilton Electors movement. They were both Bernie Sanders delegates in 2016 and told Fox News that after being picked as Democratic electors they decided to vote for moderate Republicans instead of Hillary Clinton not as a rebuke to Clinton, but as an act of good faith to try to convince Republican electors to eschew Trump.

They failed in their effort to stop Trump, but Chiafalo told Fox News he does not regret his 2016 vote for Colin Powell.

"I still needed to go and stand up behind what I had told all those Republican electors on the phone," he said.

The vote was counted but he was later fined by the state of Washington.

Baca was removed as an elector and replaced with someone who would vote for Clinton when he crossed out her name and voted for John Kasich.

"The state intervened and removed me as an elector," Baca said. "When they removed me that's when the capitol exploded. There were chants and cheers... I knew I had to stick to my conscience."