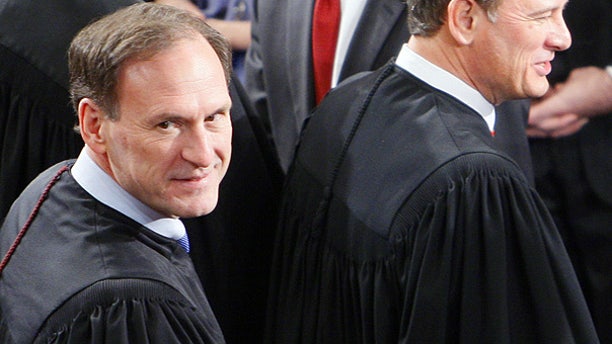 When Supreme Court justices enter the House of Representatives in their black robes for the president's next State of the Union address, Samuel Alito does not plan to be among them.

The justice said the annual speech to Congress has become very political and awkward for the justices, who he says are expected to sit "like the proverbial potted plant."

Of course, Alito did not remain impassive at the most recent State of the Union speech by President Barack Obama. He reacted to Obama's unusual rebuke of the court for its decision in a campaign finance case by shaking his head and mouthing the words "not true."

The 60-year-old justice, an appointee of President George W. Bush, acknowledged with a smile that his colleagues "who are more disciplined refrain from manifesting any emotion or opinion whatsoever."

Alito, answering questions following a speech Wednesday at the conservative Manhattan Institute in New York, also said, "Presidents will fake you out." The institute provided an online video link to Alito's talk and question-and-answer session.

The president will begin a sentence with an invocation of the country's greatness, Alito said. If justices don't jump up and applaud, "you look very unpatriotic," he said.

But, Alito continued, then the president may finish the thought by adding "because we're conducting a surge in Iraq or because we're enacting health care reform." Justices aren't supposed to react to statements about policy or politics.

The better course, Alito said, is to follow the example of more experienced justices like Antonin Scalia, Clarence Thomas and the recently retired John Paul Stevens. None has attended in several years.

"So I doubt that I will be there in January," Alito said.

At least one justice, Stephen Breyer, has said he was not bothered by Obama's criticism and believes justices should attend so that viewers can see the three branches of government represented in the same room.

Even in retirement, Stevens is still taking aim at Scalia, his favorite foil on the Supreme Court.

In a recent speech in Washington, Stevens reached back to 1991 to take Scalia to task for his opinion in Harmelin v. Michigan, a case that upheld a life prison term for cocaine possession against a challenge that the sentence was cruel and unusual.

Scalia, Stevens said, concluded in his opinion that the Eighth Amendment prohibited specific kinds of punishments, including drawing and quartering and disembowelment, "but contained no requirement that the punishment fit the crime."

Even a life sentence for a parking ticket would not have violated the Constitution under that reasoning, Stevens said.

The real issue, the 90-year-old retired justice said (and not for the first time), is Scalia's faulty reliance on originalism to interpret the Constitution. In Scalia's view, judges should give a fair reading to the words of the Constitution as they were meant when they were written.

But Stevens said that "reliance on history, even when the interpretation of past events is completely accurate and undisputed, provides an insufficient guide to the meaning of our Constitution."

Instead, he said, the Eighth Amendment "responds to evolving standards of decency in a maturing society."

A long-awaited biography of Justice William Brennan, who served nearly as long as Stevens before he retired in 1990, is finally out.

In "Justice Brennan, Liberal Champion," authors Seth Stern and Stephen Wermiel assert that Brennan was disappointed in fellow liberal and frequent ally Thurgood Marshall after the latter joined the court. "What the hell happened when he came on the court, I'm not sure, but he doesn't seem to have had the same interest," they quote Brennan as saying about Marshall. The first African-American justice, Marshall had impressed the justices as a civil rights lawyer who argued many key cases at the high court.

The book also makes clear that Brennan, a defender of women's rights on the court, was uncomfortable with women as professional peers, once saying he would retire if a woman joined the Supreme Court. (In fact, however, he stayed on the court for nine years after Sandra Day O'Connor became the first female justice.) He also was slow to hire women as law clerks.

The authors also point out that Brennan's support for abortion rights coexisted with his unease about abortion on a personal level and that his strong backing of press freedoms did not lessen his antipathy toward members of the press.

The story behind the book also is interesting. In an arrangement that was not revealed while Brennan sat on the court, the justice gave unusual access to Wermiel, then a reporter for The Wall Street Journal, beginning in 1986. Wermiel, who now teaches law at American University, was to produce a book about Brennan in an unspecified but reasonable amount of time.

Wermiel had completed only a few draft chapters when Brennan died at age 91 in 1997. Wermiel basically put the project aside for several years until he enlisted Stern, a reporter for Congressional Quarterly and a graduate of Harvard Law School, to take over the bulk of the writing.