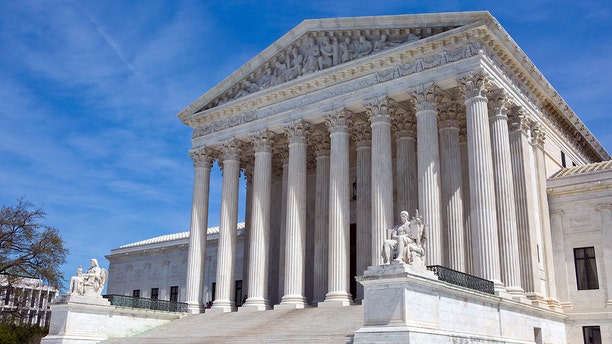 A spirited Supreme Court launched its new term on Monday, short its ninth member, raising the possibility several high-profile cases on the docket will wind up evenly split. (iStock)

A spirited Supreme Court launched its new term on Monday, albeit short a ninth member and raising the possibility several high-profile cases on the docket will wind up evenly split.

That appeared true for its first oral argument, a lively property rights case over the federal government's efforts to designate "critical habitat" for an endangered amphibian.

The justices appeared split along ideological lines and could vote 4-4. That would be a temporary victory for the U.S. Fish and Wildlife Service and the rare frog at issue.

The confirmation of Brett Kavanaugh to replace the retired Justice Anthony Kennedy has been delayed at least a week, while the FBI conducts a supplemental background check on claims of sexual misconduct against the federal appeals court judge. Kavanaugh denies allegations he assaulted a fellow high school student in the 1980s.

For now, Kavanaugh cannot participate in any high court business, including hearing or voting on any of the six cases scheduled for oral argument this week.

But the court's business went on as scheduled. Chief Justice John Roberts began the new term with a brief tribute to Justice Ruth Bader Ginsburg on the 25th anniversary of her "distinguished service" on the bench. He wished the oldest member of the high court "many more years of service in our common calling." The 85-year-old Ginsburg has given no indication she is ready to leave her job.

Roberts was also one of three members of the Supreme Court to attend Sunday's annual Red Mass, co-sponsored by the local Catholic diocese to celebrate the legal profession. Justices Clarence Thomas and Stephen Breyer were among the invited guests, along with Attorney General Jeff Sessions.

The environmental dispute before the court on Monday deals with dusky gopher frogs.

In that case, 1,600 acres of private land in Louisiana were designated "critical habitat" for the little spotted gray animals, even though it is believed to exist only in neighboring Mississippi. The lumber company holding partial rights to the land says it is neither habitat nor essential to species conservation.

Wildlife biologists believe the frog may have lived in parts of southern Louisiana decades ago, but has not been recently documented there. The creatures require certain suitable habitat, including ephemeral or temporary ponds, and upland terrain without too many trees.

It was designated endangered in 2001, but critical habitat for its survival was not out in place until 11 years later.

In naming "Unit 1" in St. Tammany Parish-- north of New Orleans-- as critical habitat, the federal government made no initial determination on the regional economic impact, but did seek input from the public to its plans.

Arguing for Weyerhaeuser, one of the world's largest landowners of private timber land, attorney Timothy Bishop told the justices it would cost the company "tens of millions of dollars" in lost income.

"This is not a property on which there will be any groundcover to supply moisture or food or cover for these frogs," he said. "We would have to totally change the way that this land operates in order to accommodate the frog."

That brought a series of questions from Justice Elena Kagan.

"We know that habitat doesn't mean just where a species lives," she noted. "I mean, that would be the common understanding of the word 'habitat,' but this statute clearly goes beyond that, and we know because it says where a species could live, right?  There are also habitats that are outside the geographical area occupied by the species."

"To the extent that these ponds are not designated critical habitat, and don't survive, this frog won't, if there's a drought," said Justice Sonia Sotomayor. "If it's critical, they can designate it and then a deliberate process goes on where they talk to the owners, and you come to an accommodation. That's what generally happens.”

Roberts asked how far the government could go to mandate habitat restoration, including building greenhouses in Alaska for the frog.

"There has to be presumably some limit on what restoration you would say is required," the chief justice told Kneedler, who said that could be accomplished with "reasonable efforts."

"The question is, who is going to have to pay and who should pay for the preservation of this public good? Now it may be very difficult for a lot of people to shed tears for a big corporation like the one in this case, but let's suppose this is a family farm," added Alito. "Is there some formula, some percentage of the value of the family farm that would have to be required for this reasonable restoration before that becomes unreasonable?"

If the case winds up with an initial 4-4 vote, the justices have the option of letting the lower court ruling stand without deciding the precedential merits, or scheduling a re-argument later this term, when the ninth member of the court is finally aboard.