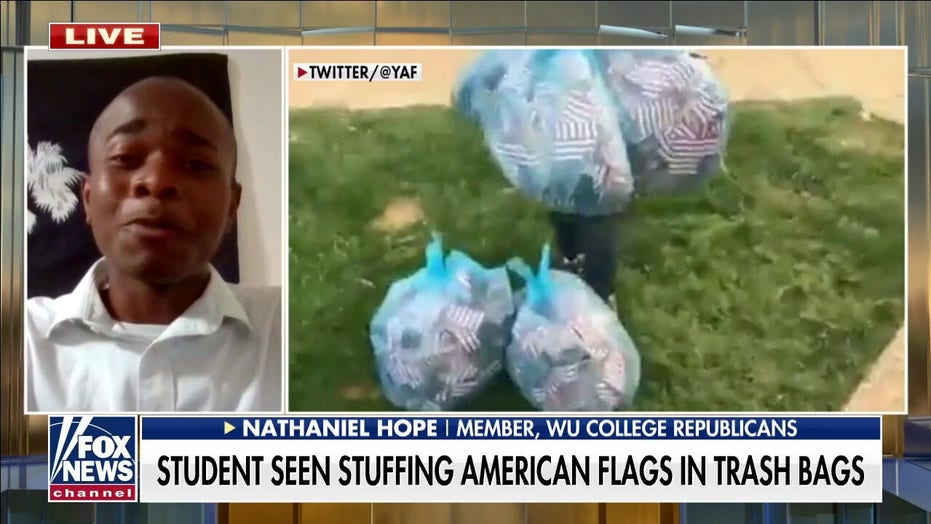 Nathaniel Hope, member of the Washington University College Republicans group, on witnessing the memorial being dismantled.

A student senator at Washington University in St. Louis is being accused of removing American flags from a 9/11 memorial display and throwing them in the trash.

In a video posted by Young Americans for Freedom, the student can be seen gathering small American flags into bags and attempting to carry them away. A total of 2,977 flags were placed on the lawn representing each murdered 9/11 victim.

Late Saturday, Washington University officials condemned the removal of the flags but declined to say whether the student would be disciplined, according to Student Life, the university's student newspaper. The paper identified the student as Fadel Alkilani, vice president of finance for the student union.

The student paper later received a statement from Julie Flory, the university's vice chancellor for marketing and communications.

"We were disappointed to learn about the disruption to the 9/11 display on Mudd Field," the statement read. "We condemn the interference with the expression of support by the College Republicans for the victims of the national tragedy that took place 20 years ago today."

Nathaniel Hope, a member of the WU College Republicans, filmed the video and claimed Alkilani showed "no remorse." Hope also asserted the flags were removed in "violation of school rules."

"At minimum, I believe he should be removed from both SU [student union] and his [resident adviser] position, as what does it say to be a top American institution, and have yourself represented by a student leader who has no respect for property, campus traditions or the remembrance of thousands of lost lives," Rodriguez wrote. "Today is about remembering the tragedy, 20 years ago to the day, not to make a political statement. Any reason he can conjure to remove the flags I find ludicrous."

Alkilani told YAF, "I did not violate any university or legal policy. Now go away."

Alkilani reportedly bragged about the vandalism on Twitter saying that he wanted to "protest against American imperialism and the 900,000 lives lost as a result of post 9/11 war." His Twitter account has been made private so that only followers can view his tweets.

Students say that Alkilani had attempted to destroy the memorial on Friday night but was told to stop by campus police.

Fox News reached out to Alkilani, campus police, and Washington University but did not immediately receive a response.