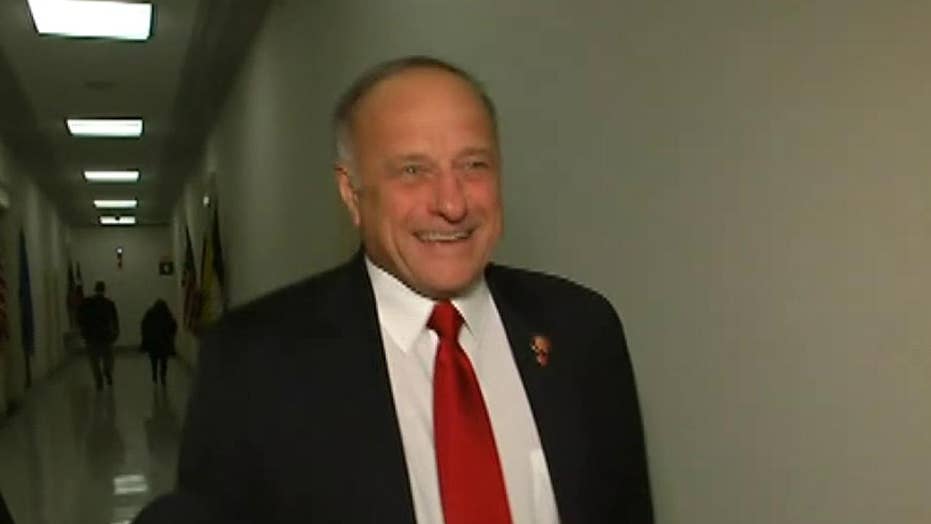 King on possible censure: That's not going to happen

Representative Steve King rejects the possibility that he may face a censure for his comments.

One day after the House of Representatives formally voted to disapprove of his comments about white supremacy, Iowa Republican Rep. Steve King sounded a note of defiance, telling Fox News a more severe vote to censure him was "not going to happen."

House Democratic leaders were reportedly intent on tabling the censure motion because they were concerned potentially opening the door to similar censure motions against their own members. Michigan Rep. Rashida Tlaib, for example, called President Trump a "motherf---er" and was photographed wearing Palestinian robes with Linda Sarsour, a proponent of Louis Farrakhan and the Nation of Islam. Farrakhan has compared Jews to termites and praised Hitler.

Still, top Democrats warned that King could still be censured if he makes further offensive comments, and several prominent party leaders have called for his expulsion from the House. But asked about the possibility of being censured Wednesday afternoon, King broke out into laughter.

"No, that's just not going to happen," King told Fox News. "Oh, no." He gave the same response when questioned about the possibility of further action by the House.

A censure -- which is more severe than a reprimand or resolution of disapproval, but not as severe as expulsion -- would be a significant, but still merely symbolic, step. The House has censured just 23 members in history, most recently, former Rep. Charlie Rangel, D-N.Y., in December 2010.

King added that it was a "fact" that critics had misinterpreted his comments to The New York Times in a recent interview, and that the "record" proves his position.

The controversy stems from a recent interview. “White nationalist, white supremacist, Western civilization — how did that language become offensive?” King asked The New York Times last week. “Why did I sit in classes teaching me about the merits of our history and our civilization?”

Actor Ron Perlman had some choice words for GOP lawmakers in the wake of the ongoing controversy surrounding Rep. Steve King. The 68-year-old former 'Hellboy' star took to Twitter on Monday to share his distaste with certain members of the party that have spoken out against King, going as far as to compare them to the Ku Klux Klan.

King has since said he was only referring to the term "Western civilization" when asking how the language became offensive. "Clearly, I was only referencing Western Civilization classes. No one ever sat in a class listening to the merits of white nationalism and white supremacy," he said in a statement this week.

On Tuesday, the House of Representatives formally rebuked King, overwhelmingly passing a resolution of disapproval for his comments. Even King voted for the measure, though he strongly objected to GOP leaders stripping him of his committee assignments a day earlier. King said removing him from the committees amounted to an "unprecedented assault" on his freedom of speech.

The final vote on the disapproval resolution was 424-1, with only Democratic Illinois Rep. Bobby Rush voting no. Rush said he wanted to censure King instead.

"As with any animal that is rabid, Steve King should be set aside and isolated."

"As with any animal that is rabid, Steve King should be set aside and isolated," Rush said Tuesday.

WATCH: BRIT HUME CALLS OUT KING, BUT SAYS JOURNALISTS ARE IRRESPONSIBLY THROWING AROUND ACCUSATIONS OF RACISM

On Wednesday, Rush told Fox News that "there was a lot of political hanky-panky" behind the decision by House Democrats to sideline the censure resolution.

Rush added that he was disappointed that the censure motion had been tabled. The resolution that passed Tuesday states that the House “once again rejects white nationalism and white supremacy as hateful expressions of intolerance that are contradictory to the values that define the people of the United States.”

The text of the resolution does not explicitly criticize King personally, although it references his remarks.

"The resolution yesterday dealt with bigotry. But they excluded the bigot," Rush said. "The object of the conversation was not even brought up."

Other Democrats, and some Republicans, suggested further action may be necessary.

"I think expulsion would be fine with me," Democratic South Carolina Rep. James Clyburn, who drafted the disapproval measure, said after the vote Tuesday.

"Serving as a member of Congress is a unique honor and Steve King’s comments regarding racism and white supremacy are disqualifying on their face," Maryland Democratic Rep. John Delaney, who has announced a 2020 presidential run, added in a statement. "King is unfit for office and has no place in our political body or our national discourse. ... It's time for Steve King to go.”

In an editorial Tuesday, the Des Moines Register agreed.

"Congressman Steve King should resign,” the editorial states. “He has lost even the potential to effectively represent his Iowa constituents because of his abhorrent comments about white nationalism and white supremacy.”