Los Alamitos Council members voted 4-1 to opt out of a state law that limits cooperation between local police and federal immigration agents.

Los Alamitos’ adopted ordinance claims the new state law “may be in direct conflict with federal laws and the Constitution.” The council, therefore, “finds that it is impossible to honor our oath to support and defend the Constitution of the United States,” if they do not opt out of it.

The vote caused diverse reactions among over 150 people participating in the council meeting.

“They are asserting their right to ensure the constitutional remains the main law of the land,” Arthur Schaper, who supported the motion, told Fox Los Angeles.

Moti Cohen, an immigrant from Israel, said he came to the U.S. legally and that everyone should follow that path too. He became a legal resident after marrying his American wife.

"The law is the law and has to be enforced all over the country," he told The Los Angeles Times. "The country is a law-and-order country and you have to come here legally."

Others, upset that a council in California chose to decide whether to ignore state laws aimed at protecting illegal immigrants, showed up to protest the vote – causing a temporary delay.

“What we don’t understand what we fear we kill. And that’s what we’re doing we’re killing the spirit of this nation which is American,” Joanne Abuqartoumy told the newspaper.

The only dissenting voice on the council, Mark Chirco, wrote on Facebook after the vote that “I could not see how the ordinance proposed tonight would benefit our city” and will instead “place our city in danger of a costly and uphill battle with the State of California.”

But many believe the example of the Los Alamitos Council may be a game-changer in California, where state officials have positioned themselves as against the immigration policies of the Trump administration. 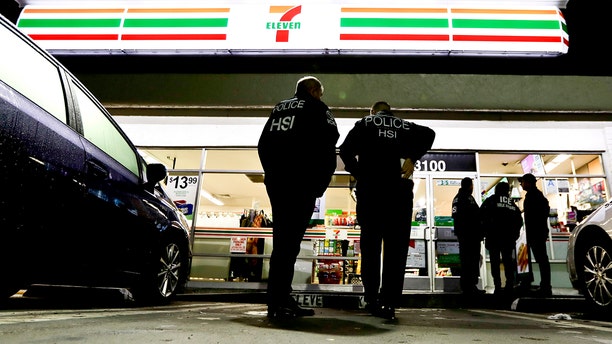 Los Alamitos’ adopted ordinance claims the new state law “may be in direct conflict with federal laws and the Constitution.” (AP)

"Perhaps it could be the leader. We are heartened that body politics is taking an action that supports federal laws," Robin Hvidston, executive director of pro-immigration enforcement group We the People Rising, told the LA Times.

"We're just calling on the federal government to stand up on behalf of the city," she said, hoping the U.S. Department of Justice will support the city.

The newly passed law will have to have a second reading in a month. It is expected that the ordinance will pass again.