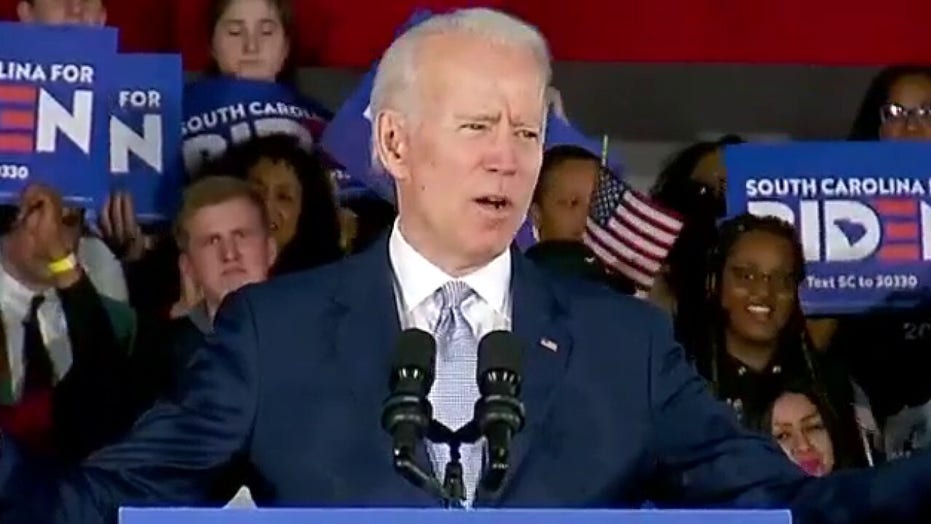 Biden rallies SC supporters after victory: Our campaign is 'very much alive'

Former Vice President Joe Biden decisively won the South Carolina Democratic primary on Saturday, claiming his first victory of the 2020 race and giving a crucial boost to his struggling campaign ahead of Super Tuesday.

The victory tracked with polls indicating that Biden, buoyed by support among black voters, had a significant lead in the state for months over Sen. Bernie Sanders and others, despite the surging Vermont senator beginning to close the gap after early primary wins that rocketed him to front-runner status. Fox News projects Sanders will finish second, followed by wealthy progressive activist Tom Steyer -- who ended his campaign within hours of polls closing.

Biden had banked on his "firewall" of South Carolina to essentially save his flagging presidential bid. As the former primary front-runner took the stage at his victory party in Columbia, S.C., he hugged South Carolina Rep. Jim Clyburn and thanked him for his recent endorsement saying, "You brought me back."

“Just days ago the press and the pundits had declared this candidacy dead. Now thanks to all of you, the heart of the Democratic Party, we just won and we won big because of you,” Biden declared.

"This is the moment to choose the path forward for our party, this is the moment and it's arrived, maybe sooner than anyone guessed it would but it's here," Biden told supporters in Columbia. 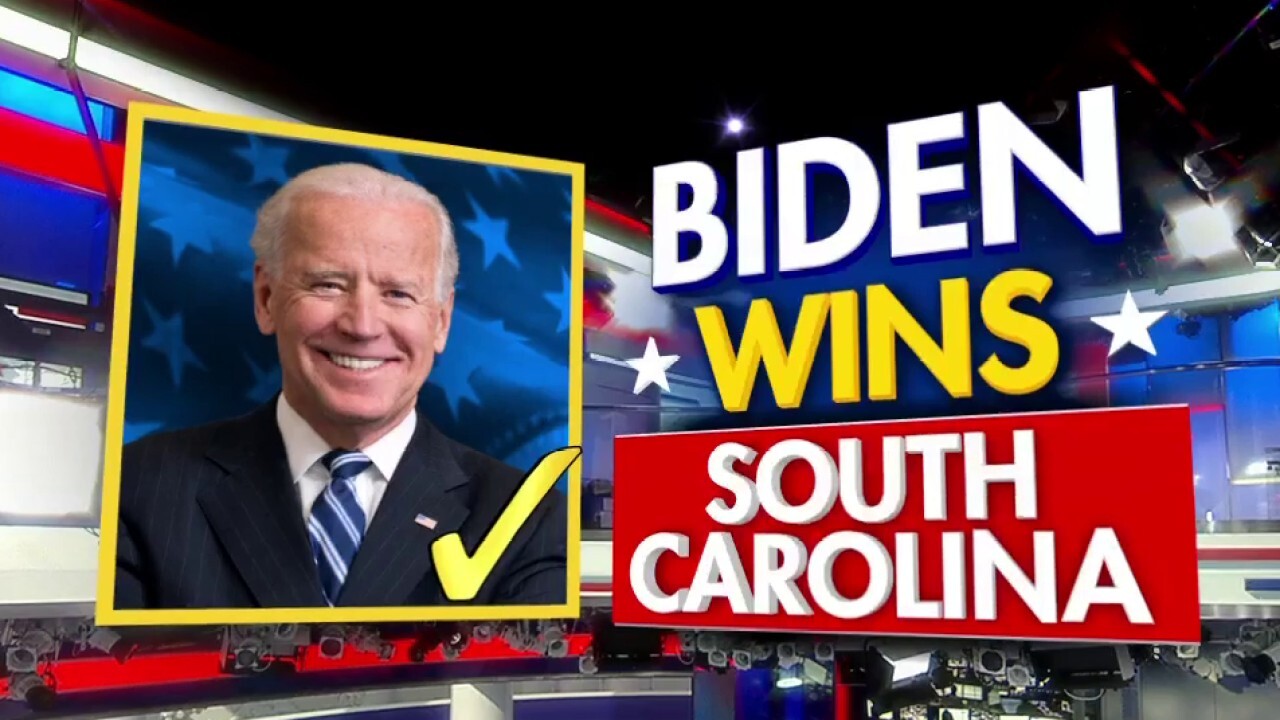 Biden will close in on Sanders' delegate lead coming out of South Carolina, though Sanders may still be well-positioned in a number of delegate-rich Super Tuesday states.

A total of 54 pledged delegates were at stake Saturday. With 87 percent of returns in, Biden had 48.8 percent, Sanders had 19.8 percent and Steyer had 11.5 percent. Behind Steyer were former South Bend Mayor Pete Buttigieg, Sen. Elizabeth Warren, D-Mass., Sen. Amy Klobuchar, D-Minn., and Rep. Tulsi Gabbard, D-Hawaii.

The win could help Biden reset the race after Sanders racked up victories in New Hampshire and Nevada and essentially tied the Iowa caucuses with Buttigieg. The performance had led to speculation that Sanders may soon be unstoppable on his path to the Democratic nomination, as well as questions over whether Biden could resurrect his campaign after the former front-runner failed to win any of the first three states on the calendar.

But Biden, who has sought to present himself as the moderate best positioned to beat President Trump in November, was hoping that he could get back on the board in southern states with higher numbers of black voters. Iowa and New Hampshire are both whiter states than the U.S. as a whole, while Nevada showed Sanders' strength with Hispanic voters.

Biden took a series of veiled jabs at his left-wing rival, telling the crowd that "most Americans don't want the promise of revolution, they want more than promises -- they want results."

"We have the option of winning big or losing big, that's the choice," he said, in reference to fears about Sanders' electability.

Sanders, meanwhile, said he had created a movement and emphasized the importance of bringing young people, working-class people and others into that movement as he downplayed his loss in South Carolina.

"Our job together is to reach out to those working people and say we do care about you, join us and come into our movement," he said.

"You cannot win them all. Lotta' states out there," Sanders said as he congratulated Biden. "Nobody wins them all."

A Fox News voter analysis found that Biden was the highest rated by voters on who could best handle race issues. He got 38 percent compared with Sanders' 19 percent. Black voters, in the end, overwhelmingly picked Biden on Saturday.

Late deciders also went big for Biden, the analysis found, with 48 percent breaking for Biden, and only 15 percent going for Sanders.

Trump used Biden's win to mock former New York City Mayor Michael Bloomberg, who is sitting out the early contests but spending astonishing sums on ads in a bid to dominate Super Tuesday.

"Sleepy Joe Biden’s victory in the South Carolina Democrat Primary should be the end of Mini Mike Bloomberg’s Joke of a campaign. After the worst debate performance in the history of presidential debates,  Mini Mike now has Biden split up his very few voters, taking many away!" he tweeted.

The former vice president told reporters on Saturday morning that he's "optimistic not just about today" but about "the whole process from here on out."

And Biden predicted that "the bigger the win" in South Carolina, "the bigger the bump" he'll get going into the 14 Super Tuesday states that hold contests in three days.

Biden said that a strong win in South Carolina will "put me in a position to do well in North Carolina and Alabama and other states that I think in the Democratic primary I can do very well."

"I don't think it'll even be over after Super Tuesday. I think it's so it can go on to states that are ones I feel very good about," he emphasized.

Polls had suggested Biden should win the contest, but some of those polls had shown a narrower lead and prompted Sanders supporters to hope that he could snatch it. Ahead of the primary, there was speculation that the state's open primary system -- under which Republicans could technically vote in the Democratic race -- could lead to GOP voters mischievously backing Sanders in a bid to boost the candidate some conservatives would rather see face Trump in November. But if that happened, it wasn't enough to cut down Biden's advantage.

The Sanders surge has scared party moderates, who fear that the far-left candidate could hand Trump the presidency as well as Republican control of the House and Senate. Sanders has sought to push back on the narrative that he is unelectable, pointing to polls that he says show him beating Trump in the fall.

Other candidates, such as Buttigieg and Klobuchar, are looking ahead to Super Tuesday already and keeping expectations low for Saturday -- with a Buttigieg campaign aide telling Fox News that they're looking for a fourth- or fifth-place finish. But Steyer was hoping for a strong showing in South Carolina, with polls placing him in third place behind Biden and Sanders as he heavily courted black voters.

Steyer told Fox News on Friday how he viewed his chances.

He later ended his campaign.