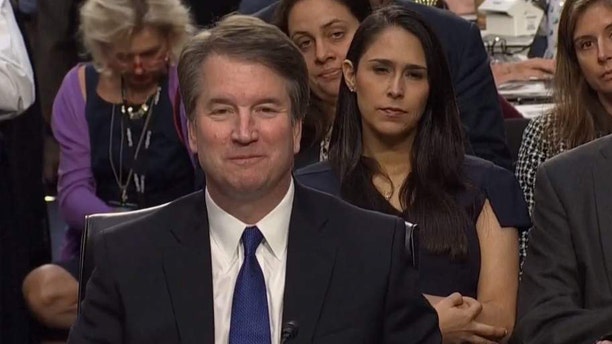 September 4, 2018: Zina Gelman Bash (right) was accused by liberal activists on Tuesday of being a white supremacist over an unintentional hand gesture she made during the confirmation hearing of Supreme Court nominee Brett Kavanaugh (left). (Fox News)

A former Trump administration official was accused by liberal activists on Tuesday of being a white supremacist over an unintentional hand gesture she made during the confirmation hearing of Supreme Court nominee Brett Kavanaugh.

Zina Gelman Bash, a former Kavanaugh clerk who now works in Texas Attorney General Ken Paxton’s administration, was attacked by liberal activist on social media for holding her hand in an “OK” gesture as she was sitting behind Kavanaugh. Many on social media believed it was a so-called “white power” hate symbol.

“What fresh hell is this!!!??? Kavanaugh’s assistant Zina Bash giving the white power sign right behind him during the hearing? This alone should be disqualify!!!” Amy Siskind, president and co-founder of the female advocacy group New Agenda, wrote in a now-deleted tweet.

She later backtracked, saying that her comment became “a distraction,” though urged the media to ask Bash about the gesture, noting that “it's not a natural resting position.”

The conspiracy didn’t slow down even after some pointed out that Bash had a Mexican mother and a Jewish father, while her grandparents only narrowly escaped the Holocaust.

“This neo-nazi is Zina Bash. She’s intentionally throwin up White Power signs at a Supreme Court Justice confirmation hearing. On national TV. She works for Kavanaugh & is also one of the writers for Trump’s immigration policy. This is their new Amerikkka,” tweeted actress Kelly Mantle.

The Anti-Defamation League previously noted that the “OK” gesture isn’t a hate symbol. “Has the simple thumb-and-forefinger ‘OK’ hand gesture become a white supremacist hand sign? Well, no, it hasn’t, but you are likely to hear just the opposite from social media, thanks to the latest hoax from members of notorious website 4chan,” read a post from the anti-racism group.

“Kavanaugh’s former law clerk Zina Bash is flashing a white power sign behind him during his Senate confirmation hearing. They literally want to bring white supremacy to the Supreme Court. What a national outrage and a disgrace to the rule of law,” wrote Dr. Eugene Gu, attracting over 12 thousand retweets.

U.S. Attorney John Bash, her husband, came to the defense his wife on social media, posting a series of comments regarding the false accusations leveled against Bash.

“The attacks today on my wife are repulsive. Everyone tweeting this vicious conspiracy theory should be ashamed of themselves. We weren’t even familiar with the hateful symbol being attributed to her for the random way she rested her hand during a long hearing,” he wrote.

“Zina is Mexican on her mother’s side and Jewish on her father’s side. She was born in Mexico. Her grandparents were Holocaust survivors. We of course have nothing to do with hate groups, which aim to terrorize and demean other people — never have and never would,” he continued.

“Some of the Twitter comments have even referred to our baby daughter. I know that there are good folks on both sides of the political divide. I hope that people will clearly condemn this idiotic and sickening accusation,” he posted.