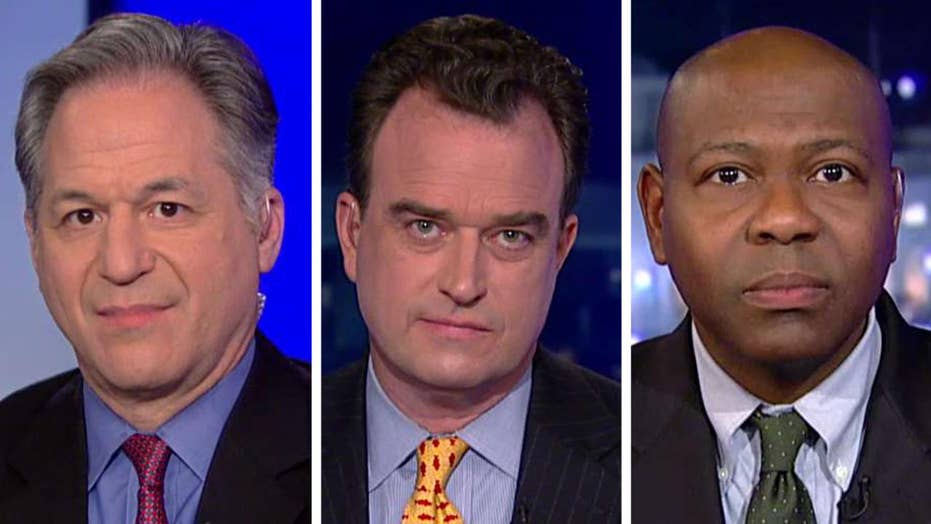 As the partial government shutdown drew closer to becoming the longest of any government shutdown in U.S. history, Washington Post opinion writer Charles Lane reevaluated the present state of the battle over border security on the "Special Report" All-Star panel Friday night.

Lane -- along with Washington Times opinion editor Charlie Hurt and Wall Street Journal columnist Jason Riley -- weighed in on who’s currently winning or losing the shutdown battle and how much longer the impasse will last.

After this week's primetime address to the nation from the Oval Office and a quick visit to the southern border in Texas, President Trump continued to advocate strengthening the barrier between the U.S. and Mexico while House Speaker Nancy Pelosi, D-Calif, and Sen. Minority Leader Chuck Schumer, D-N.Y., stood firm in their position to not give the administration the $5.7 billion in border-wall funding it has asked for.

Lane began Friday's panel session by saying the country was either at the “really absurd stage” or the “really serious stage" of the shutdown.

“The reason that it all seems so absurd is because both sides know [what] the deal at the end of the day would be. It would be some sort of wall funding for a concession on something that Democrats really care about like DACA,” Lane said. “You start to see even some of the newly elected Democrats from swing districts talking about that.” (DACA refers to Deferred Action for Childhood Arrivals, an Obama-era program for assisting adults who arrived in the U.S. illegally as children.)

Lane then explained the “serious thing” about this battle is that if Trump made good on his continued threat of invoking a national emergency, it would lead to the government not functioning “as it was intended” and further “dysfunction” in Washington.

Hurt told the panel that the president is “pretty confident” that he has the “winning hand.” He added that this administration might be able to prove the “legal standing” in declaring a national emergency.

Meanwhile, Riley expressed concern about Trump’s potential use of such a power, reflecting on what he thought was overreach committed by President Obama and how it would be “more of the same” from the current president.

“President Trump won’t be president forever. Two can play at this game. ‘Oh, income inequality is a national emergency. I think we should spend x billion dollars on doing this and I don’t need Congress’s approval. Look at what President Trump did before I got here.’ I think that is a serious concern.” Riley elaborated. “You also see senators from these states that are being hit by this shutdown, rural states, large forests, a lot of furloughed forest workers and so forth -- Oregon, Alaska, Maine -- and you’re starting to see some fracturing on the right when it comes to standing together with the president the longer this goes on.”

The Wall Street Journal columnist slammed elected officials on Capitol Hill, saying they aren’t “doing their jobs,” adding that perhaps they aren’t “living paycheck to paycheck” as are many of the 800,000 government workers who weren't paid this week.