In the early morning hours of April 1, 2013, a police officer in Cleveland, Texas, pulled over James Leonard for speeding along a known drug corridor. After obtaining a search warrant for the vehicle, the officer discovered in the trunk a safe containing more than $200,000 and a bill of sale for a home in Pennsylvania.

Texas initiated civil forfeiture proceedings against the money in the safe on the grounds that there was a “preponderance of evidence” that the cash was connected to criminal activity. Leonard’s mother Lisa – who is the alleged owner of the safe and its contents – appealed a trial court’s forfeiture order and the case eventually made its way to the Supreme Court.

While the justices ruled this March that the case, Leonard v. Texas, had procedural problems that made it ineligible for Supreme Court review, Justice Clarence Thomas penned a scathing opinion that argued that in future cases the country’s highest court should rethink the leeway granted to law enforcement to seize property under a centuries-old statute meant to curb piracy on the high seas and not punish speeding motorists in small town America.

“This system — where police can seize property with limited judicial oversight and retain it for their own use — has led to egregious and well-chronicled abuses,” Thomas wrote. “Whether this Court’s treatment of the broad modern forfeiture practice can be justified by the narrow historical one is certainly worthy of consideration in greater detail.”

Civil forfeiture — the legal process by which law enforcement officers are able to take assets from persons suspected of involvement in a crime without necessarily charging the owners with wrongdoing — has its roots in the colonial-era Navigation Acts. Those laws, which in the 1700s allowed British troops to seize any ship or cargo found in violation of its Navigation Acts and give that property to the British crown, whether or not its owner was actually guilty. The move was justified at the time because in many cases the ship’s owner was overseas and out of British jurisdiction.

Despite the U.S. Supreme Court upholding the constitutionality of forfeiture laws in the early 1800s, they remained largely dormant until the 1980s, when the practice saw a tremendous expansion that has lasted to this day. While the Obama administration took some measures to curb the practice, the Justice Department’s Asset Forfeiture Fund in 2014 took in $4.5 billion and last year the Drug Enforcement Administration hauled in more than $4 billion.

The controversial practice has now pitted local, state and federal lawmen – who argue that forfeitures swiftly cut off proceeds to criminals like drug traffickers while injecting much-needed money into underfunded law enforcement agencies -- against a bipartisan group of lawmakers in Congress who see the practice as an abuse of Fifth Amendment rights and public trust.

“There are over 200 editorials arguing to do away with civil forfeitures. It was part of both the Democratic and Republican platforms at last summer’s conventions,” Darpana Sheth, a senior attorney at the Institute for Justice, told Fox News. “I can’t think of any other issue that enjoys such cross-aisle support.”

For its part, the Trump administration has so far taken the side of police officers in the debate over civil forfeitures – the president joked at a meeting with county sheriffs in February about destroying the political career of a Texas state senator who wants to pass legislation requiring a conviction before forfeiture can be implemented and, during his time in the Senate, Attorney General Jeff Sessions said that 95 percent of the individuals affected by the practice “have done nothing in their lives but sell dope.”

The federal government has made it far too easy for government agencies to take and profit from the property of those who have not been convicted of a crime.

“Attorney General Sessions has been a vocal supporter of forfeiture laws, but it is still too early to know what the president will do about civil forfeitures,” Sheth said.

The administration’s stance may have curried favor with many law-and-order Republicans, but it also rankled more traditional GOP lawmakers and libertarians – not to mention Democrats – who worry about the government taking individuals’ property without due process of law.

“The federal government has made it far too easy for government agencies to take and profit from the property of those who have not been convicted of a crime,” Republican Sen. Rand Paul of Kentucky said in a statement.

Coming on the heels of a Justice Department inspector general’s report that found federal forfeitures “may not advance or relate to criminal investigations,” Paul – along with Rep. Tim Walberg, a Republican from Michigan, and Democratic Reps. Rep. Keith Ellison of Minnesota and Tony Cardenas of California – introduced the Fifth Amendment Integrity Restoration Act (S. 642 and H. 1555, respectively) in March. The legislation seeks to address not only the procedural hurdles faced by those who have forfeiture proceedings brought against them, but rein in law enforcement’s ability to make millions of dollars from the seizures.

"Every year the government takes in billions of dollars in property from those suspected of being criminals – and every year, much of that property turns out to belong to innocent people who have little recourse once their belongings have been seized,” Ellison said in a statement. “This bill would help reform asset forfeiture practices and ensure that every American receives their 4th amendment right to due process.” 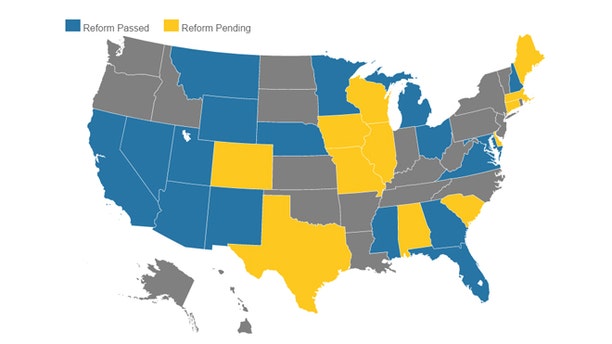 With the issue of civil forfeitures just now gaining traction in the halls of Congress, some states have already taken it into their hands to clamp down on the practice. Since 2014, more than 20 states and Washington, D.C., have enacted laws either limiting forfeiture or making the process more transparent.

“There has really been a groundswell of momentum to reform these laws over the past two years,” Sheth said.