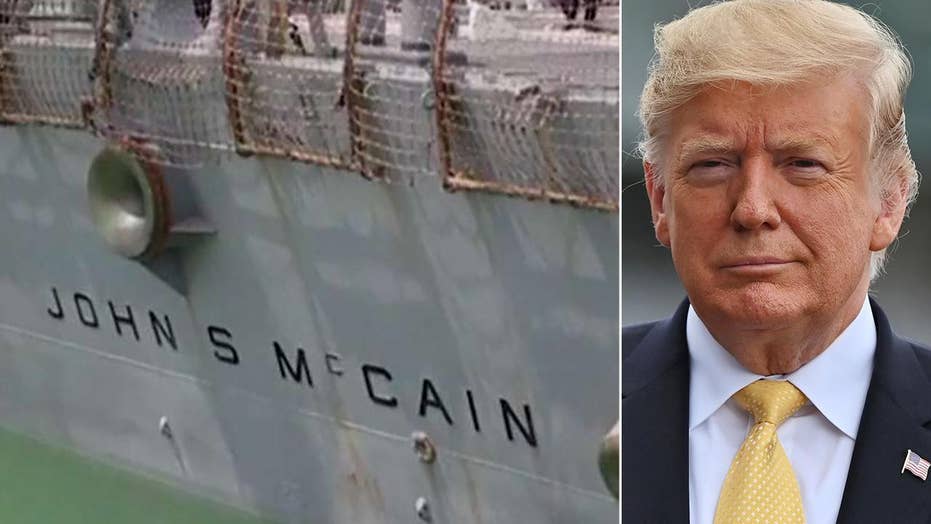 White House director of strategic communications Mercedes Schlapp says Mueller's press conference was a direct message that we all need to move on from the Russia probe and denies a report that they requested the USS John McCain to be out President Donald Trump's view during his trip to Japan.

Acting Defense Secretary Patrick Shanahan says his chief of staff will look into reports that the White House requested the USS John McCain be hidden from view during President Trump's visit to U.S. troops stationed in Japan.

Speaking to reporters in Singapore on Thursday, Shanahan said that he first learned about the mystery surrounding the ship after the Wall Street Journal reported that a U.S. Indo-Pacific Command official told Navy and Air Force officials: "USS John McCain needs to be out of sight."

"I never authorized, I never approved any action around the movement or activity regarding that ship," the acting secretary said. "I would never dishonor the memory of a great American patriot like Sen. John McCain."

Shanahan added he would never disrespect the young men and women in the crew of the ship. He also said the military "needs to do their job" and stay out of politics.

The White House, according to the Journal, allegedly sent U.S. Navy and Air Force officials an email requesting that the ship be moved ahead of Trump's visit with the military on the USS Wasp.

Trump denied the report on Twitter, writing that he was "not informed about anything having to do with the Navy Ship USS John S. McCain during my recent visit to Japan."

Photos reviewed by the news outlet reportedly showed that a tarp was placed over the ship's name before Trump's arrival. But Navy Cmdr. Clay Doss, spokesman for the Navy's 7th Fleet, said in a statement that the photo of the tarp "is from Friday and it was taken down on Saturday."

"Paint barge was also removed ahead of the visit," Doss added. "All ships remained in normal configuration during the President's visit."

Additionally, Rear Adm. Charlie Brown, Navy public affairs officer, tweeted Wednesday night that McCain's name on the ship "was not obscured during the POTUS visit to Yokosuka on Memorial Day. The Navy is proud of that ship, its crew, its namesake and its heritage."

The Journal reported, based on people familiar with the matter, that sailors on the USS John S. McCain, who usually wear hats with the ship's name on it, were given the day off when Trump visited.

Trump and McCain had a notably contentious relationship before — and after — the senator died in August 2018 of brain cancer.

McCain's daughter, Meghan, tweeted Wednesday that Trump is "a child who will always be deeply threatened by the greatness of my dads incredible life. There is a lot of criticism of how much I speak about my dad, but nine months since he passed, Trump won't let him RIP."

Fox News' Lucas Tomlinson and Joseph A. Wulfsohn and the Associated Press contributed to this report.