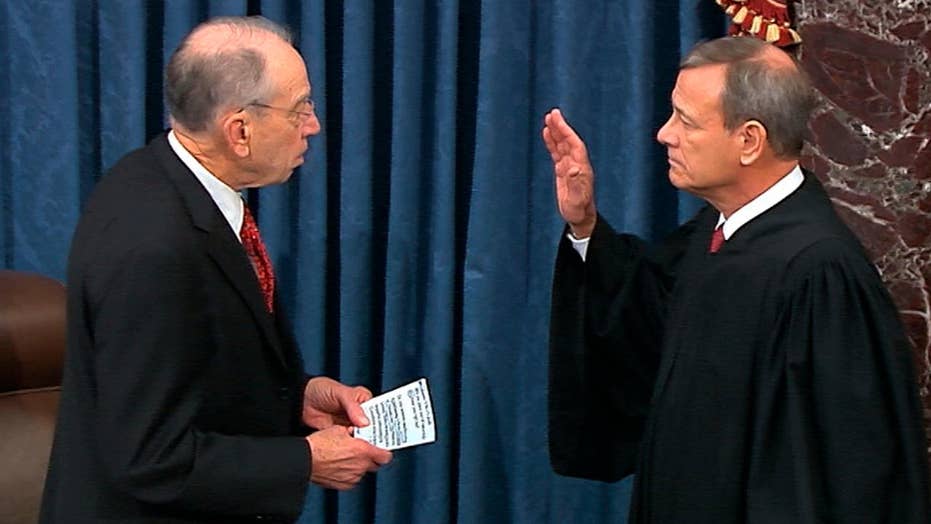 Chief Justice of the United States John Roberts swears in Senators as jurors for impeachment trial.

Chief Justice John Roberts and the senators who will serve as jurors were sworn in Thursday for the Trump impeachment trial, as the historic proceedings opened in the Senate with a mix of pageantry and partisan swipes.

"Senators, I attend the Senate in conformity with your notice for the purpose of joining with you for the trial of the president of the United States," Roberts said, before Iowa Sen. Chuck Grassley, the president pro tempore, administered the oath to him.

Roberts then immediately swore in the senators, who will act as the jury in the trial. One by one, each senator took turns approaching the well of the Senate to sign an oath book.

After the swearing-in, Senate Majority Leader Mitch McConnell, R-Ky., said the trial will continue at 1 p.m. EST on Tuesday.

Earlier on Thursday, House Sergeant-at-Arms Paul Irving led a procession of Democratic "managers" across the Capitol and the upper chamber formally received the articles of impeachment.

At noon, the Senate recognized the House managers who will prosecute the case against President Trump. The body then began a formal presentation of the two articles of impeachment brought against him: charges of abuse of power and obstruction of Congress.

"Hear ye, hear ye, hear ye: All persons are commanded to keep silent on pain of imprisonment, while the House of Representatives is exhibiting to the Senate of the United States articles of impeachment against Donald John Trump, president," Irving said on the Senate floor.

It marks the third impeachment of a president in U.S. history.

Grassley, the president pro tempore, presided over the Senate, as the House managers were welcomed and Rep. Adam Schiff, D-Calif., began reading the resolution.

As the articles of impeachment have left a bitterly divided House, both sides took parting shots at each other at back-to-back press conferences.

Minority Leader Rep. Kevin McCarthy, R-Calif., blasted the partisan impeachment as a  “taxpayer-funded campaign stunt.” He railed against House Speaker Nancy Pelosi, D-Calif., for an impeachment signing event with souvenir pens, when she’s said all along impeachment must be solemn and prayerful.

“The president necessitated this by his abuse of power and his obstruction of congress,” Pelosi said, pointing to new evidence brought forth by Lev Parnas, the Rudy Giuliani associate who said he helped Trump pressure Ukraine for political favors, and a new government finding that the Trump administration violated the law by withholding aid from Ukraine.

In a press conference with Democrats on Thursday afternoon, Senate minority leader Chuck Schumer said he hopes the gravity of the occasion will sway some Republicans votes on witnesses and documents the Democrats have requested. He said he expects a vote on witnesses on Tuesday.

"When the chief justice walked in you could feel the weight of the moment,” said Schumer, D-N.Y. “I saw members on both sides of the aisle visibly gulp.…For all of us, the solemnity, the gravity of the moment in our history hits you square in the back when you take that oath.”

The House voted Wednesday, after weeks of delay, to transmit the articles of impeachment against Trump to the Senate. It came nearly a month after lawmakers voted to impeach the president.

Pelosi signed the articles on Wednesday and House officials walked a note over to the Senate to notifying them of the development.