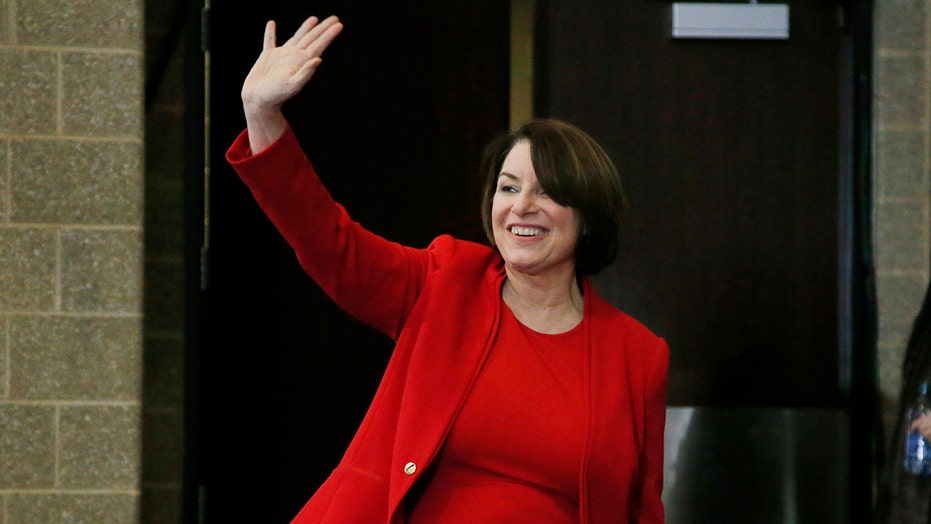 As 2020 Democratic presidential candidate Amy Klobuchar splits her time between Washington, D.C., where she is participating in President Trump’s Senate impeachment trial, and hitting the campaign trail ahead of the Democratic primaries, she revealed her “comeback strategy” on Sunday, which the Democratic senator said includes “new creative approaches.”

Speaking on ABC’s “This Week” Sunday, Klobuchar, D-Minn., said, “The comeback strategy is coming back here [Iowa] whenever I can. The minute we got done with the hearing yesterday. I got out to Iowa, did three events. I have three events today.”

Klobuchar made the comments ahead of Iowa’s presidential caucuses on Feb. 3. She said when she is stuck in Washington for Trump’s Senate impeachment trial she holds “tele-town halls,” which is a virtual town hall meeting.

“We had 12,000 people on a tele-town hall in the state of Iowa just last week,” Klobuchar said on Sunday. “We'll be doing more of those. And then I have my surrogates out there, all of these endorsers.”

She added, “We just keep trying to come up with new creative approaches.”

“No one has ever run in a major race like this that’s this close when you have to be back in the Senate the whole time,” Klobuchar told anchor George Stephanopoulos. “But I figured the voters of Iowa, New Hampshire, Nevada and South Carolina are going to understand that I have a constitutional duty to fulfill. And the fact that I have this real job and that I'm in the arena and that I'm actually taking on the Trump administration and all of their shenanigans and behavior. I think that's actually a good thing.”

She added that when she is sitting in the Senate chamber, “I just keep thinking [about] what I say on the campaign trail: This is a decency check. This is a patriotism check for our nation. And that proceeding is part of the overall problem with this president and we know that.”

Klobuchar appeared on ABC’s “This Week” Sunday as a new poll in the state that holds the first primary in the race for the White House indicates Sen. Bernie Sanders of Vermont is 9 percentage points ahead of his closest competitor in the battle for the Democratic presidential nomination.

When Stephanopoulos pointed out to Klobuchar that she “never cracked into the top four in Iowa polling,” and asked if she can “even get to New Hampshire with a fifth place finish in Iowa,”  she answered, “Oh, I'm going to New Hampshire.”

“I know I don’t have the highest name ID compared to all these other people I'm running against or the billions of dollars that two of my opponents have. But we've got grit,” Klobuchar said.

She added, “A lot of people have gotten out of this race, but I'm still standing and it's because of what I bring with me.”

Klobuchar then noted that “The debates have been good for me.”

“There will be another debate in New Hampshire. I'll be on that stage. And I'm only one of two candidates left from the middle of the country, the very, very part of the country that we need to win,” Klobuchar told host George  Stephanopoulos.

When asked if the Senate should move to censure or at least try and censure President Trump if he is acquitted Klobuchar answered, “We are not at that point right now.”

“What I want my colleagues to do is to join us in getting the witnesses,” she said, noting that members of Trump’s legal defense team say “the facts aren't there.”

Klobuchar said she wants to “hear from the men in the room where it happened. That is people like [former National Security Adviser] Mr. [John] Bolton and [acting White House chief of staff] Mick Mulvaney.”

“All of these signs point to things and discussions that they had with the president of the United States,” she said. “And all we are asking for right now is four witnesses, zero witnesses plus zero evidence equals zero justice. You can't have a trial without the witnesses.”

She added, “They [Republicans] cannot go down in history as the people that block the truth from coming forward, because eventually it will come forward.”