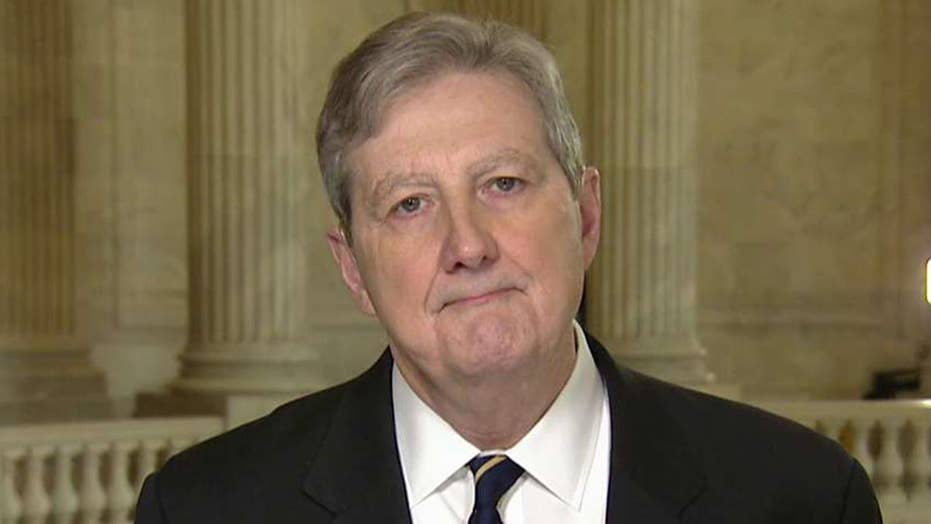 Sen. John Kennedy: Clearly there were people at the FBI who surveilled both the Trump and Clinton campaign

Congressional Democrats who are calling into question the credibility of U.S. Attorney General Bill Barr in wake of the release of the Mueller report should leave him alone and “let him do his job,” Sen. John Kennedy said.

The Louisiana Republican said on Fox News’ “America’s Newsroom” on Friday that there is a group of “wholly dishonest” members of the Democratic Party that believed that the findings by special counsel Robert Mueller into the Russia probe thought it would be the “second coming of the apocalypse.”

Instead, he said, they were disappointed by the findings and are now attacking the process and Barr, who issued a summary of the nearly 400-page document. He said Barr is being used as a “punching bag for something he didn’t do.”

Barr is under scrutiny from congressional Democrats as he prepares a redacted version of Mueller’s report on the Russia investigation.

BARR HAMMERED FOR STATING ‘SPYING DID OCCUR,’ DESPITE CONFIRMATION OF TRUMP TEAM SURVEILLANCE

“Here is my advice for my friends on the Democratic side who are in bad faith. Number one, leave Bill Barr alone. Let him do his job,” Kennedy said. “We’ll have the report next week. The redacted report. If every third word is redacted and you can’t make any sense out of it, I’ll join them raising fresh hell.”

He continued: “Number two, he is not a moron. He knows if he does that he will be heavily criticized by both Democrats and Republicans. I don’t think he will do it. My final bit of advice for my Democratic friends is, look, never corner somebody meaner.”

The attorney general then sent Congress a four-page letter that detailed Mueller's "principal conclusions." Democrats have questioned how Barr could boil down Mueller's full report so quickly and allege that it may have been written in a favorable way for the president.

In his letter, Barr said the special counsel did not find a criminal conspiracy between Russia and Trump associates during the campaign, but Mueller did not reach a definitive conclusion on whether Trump obstructed justice. Instead, Mueller presented evidence on both sides of the obstruction question, but Barr said he did not believe the evidence was sufficient to prove that Trump had obstructed justice.