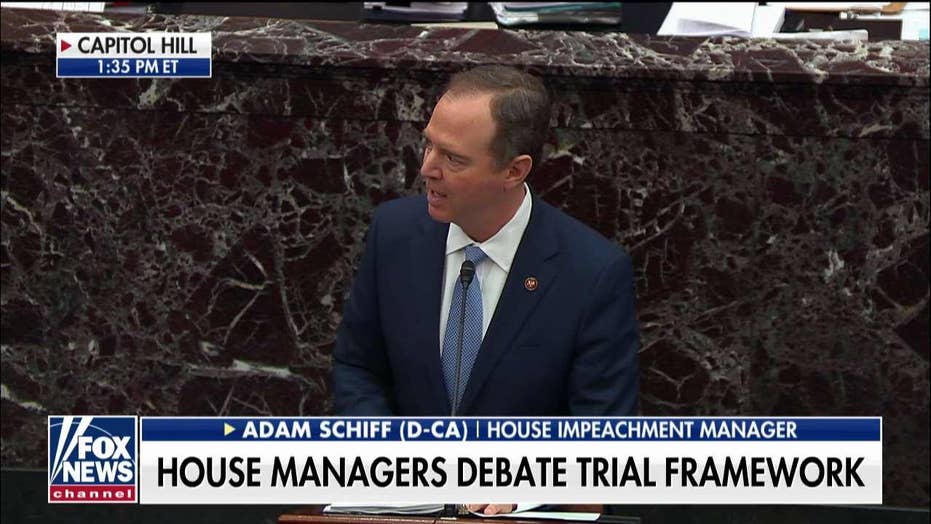 Democratic Rep. Adam Schiff stared down President Trump’s lawyers on the Senate floor Tuesday as they accused him of lying to the American people and denying Trump due process during the impeachment investigation.

Trump lawyers Pat Cipollone and Jay Sekulow repeatedly ripped into Democrats, especially Schiff, on the first day of arguments in the Senate impeachment trial, as the House Intelligence Committee chairman -- who is serving as the top Democratic impeachment manager -- sat up straight in his chair and didn’t take his eyes off his accusers.

The lawyers invoked Schiff’s name over and over again, accusing him of hiding documents, conducting an unfair impeachment inquiry and fabricating the text of the July 25 phone call between Trump and the president of Ukraine.

Just as Schiff sat down from making a lengthy opening case for new witnesses and documents, Sekulow took over and with a booming voice accused Schiff of telling falsehoods and “put[ting] words into transcripts that did not exist.”

Schiff kept his eyes wide open and glued on Sekulow, possibly aghast that Trump’s lawyers were putting him on trial.

Then it was Cipollone’s turn. He said it was “difficult” to hear Schiff tell his “tale.” He laid into Schiff even more and accused his staff of working with the Ukraine whistleblower, "contrary to his prior statements."

Trump’s lawyer then blasted Schiff for taking dramatic liberties with the phone call Trump had with the president of Ukraine, rather than reading the call transcript exactly during an impeaching hearing.

Schiff remained stoic under attack. Though at one point, he turned to face the Democratic impeachment lawyers seated across the table from him and shook his head when Cipollone accused him of blocking Republicans to the secret impeachment proceedings in the House basement known as the SCIF.

Republicans had attended the proceedings and could ask questions of the witnesses, but those who were not members of the committee or those who tried to bring in banned electronic devices were not allowed.

“They have no witnesses to absolve the president of the facts,” Schiff said.