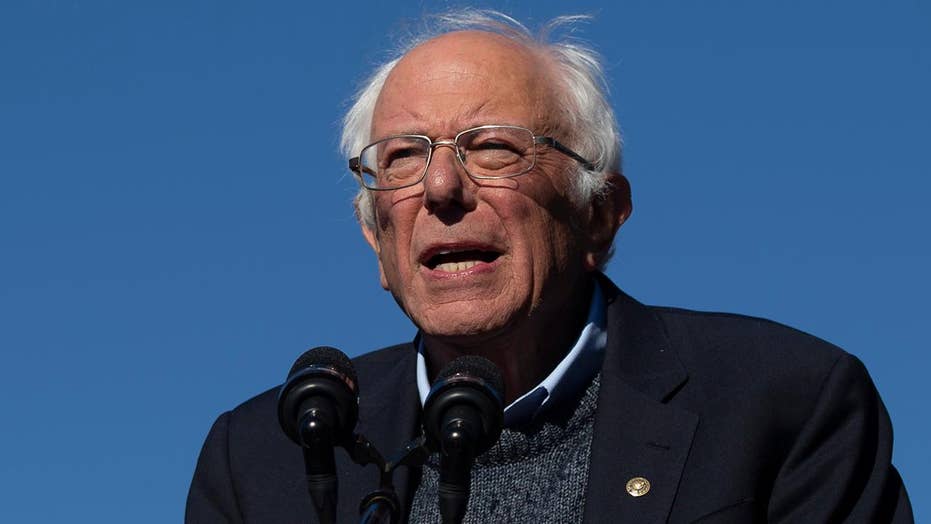 And the populist independent lawmaker also painted a contrast with Sen. Elizabeth Warren of Massachusetts, another top-tier rival and fellow progressive standard-bearer.

After paying his fee to place his name on New Hampshire’s first-in-the-nation presidential primary ballot, the senator from neighboring Vermont on Thursday stressed, “We don't have a super PAC. We don't want a super PAC.”

Democratic presidential candidate Sen. Bernie Sanders of Vermont signs the necessary paperwork to file to place his name on New Hampshire's first-in-the-nation presidential primary ballot. At the Statehouse in Concord, N.H., on Oct. 31, 2019

It was an obvious jab at Biden, who last week reversed himself and indicated he would be open to support from an outside group like a super PAC. A pro-Biden super PAC named ‘Unite the Country’ formed on Monday.

Asked by Fox News during a news conference minutes later if there’s increased friction between the Sanders and Biden camps, the senator answered “If my memory is correct, Joe Biden once said, and I'm paraphrasing, is that you've got to be careful about people who have super PACs and who they will end up being responsible for.”

And taking a shot at the former vice president, whose fundraising has lagged far behind both Sanders and Warren, Sanders said: “Joe, as I understand it, has not done particularly well in getting a lot of donations from working-class people.”

Painting a contrast, he added: “I'm extraordinarily proud ... we have received more donations than any candidate in the history of the United States of America at this point in an election. We have over a million Americans [who have] donated to our campaign and the average donation is sixteen dollars. These are working-class people supporting a working-class campaign.”

And the senator stressed that “Joe has not had that result and he is now forced to go to billionaires and multimillionaires to get his funding to through his super PAC.”

One day before Sanders arrived in New Hampshire, though, Biden's team accused Sanders of lacking "credibility" when it comes to how the senator would pay for his longstanding "Medicare-for-All" government-run health care proposal.

"It's alarming that Senator Sanders, who has been up-front for years that 'Medicare-for-All' would require middle-class tax hikes, won’t tell voters ‘right now’ how much more they will pay in taxes because of his plan," Biden deputy campaign manager Kate Bedingfield said in a statement Wednesday.

Biden doesn’t support a Medicare-for-All-type system and instead proposes adding a public Medicare-style option to the Affordable Care Act, better known as ObamaCare.

Responding on Thursday, Sanders told Fox News that Biden’s backing “a dysfunctional, wasteful and cruel health care system, a system today which is costing us twice as much per person as the people than any other industrialized country pay.”

And pushing back against the Biden campaign’s argument that he’s not being transparent on his plan’s costs, Sanders said, “We have presented a number of options, which I think makes sense. ... So we'll have more details about it. But I think it's unfair to say that we have not presented plans.”

The latest poll in the Granite State, from the University of New Hampshire and CNN, indicated Sanders with a slight 21-18 percent edge over Warren among likely Democratic presidential primary voters, with Biden at 15 percent.

Sanders, for at least the second time this week, painted a contrast with Warren, noting he’s been pushing for Medicare-for-All for decades.

Sanders explained that he may have an advantage over Warren – who’s pushing many of the same proposals Sanders made part of the Democratic mainstream in his 2016 bid for White House.

Sanders, who’s built up a very large and formidable campaign team in New Hampshire and who enjoys strong backing from a group of core supporters, vowed that “we take nothing for granted. We have already done 30 events in this state, rallies and town meetings all over the state. We are going to be back here time and time again and we're going to be in a community near you because we are going to mount a very aggressive campaign.”

After answering questions from reporters, Sanders headlined a rally in the plaza outside New Hampshire's historic Statehouse. The crowd size was noticeably smaller than the rally he held four years ago after filing to place his name on the 2016 primary ballot. Rainy weather may have contributed to limiting Thursday's crowd size.