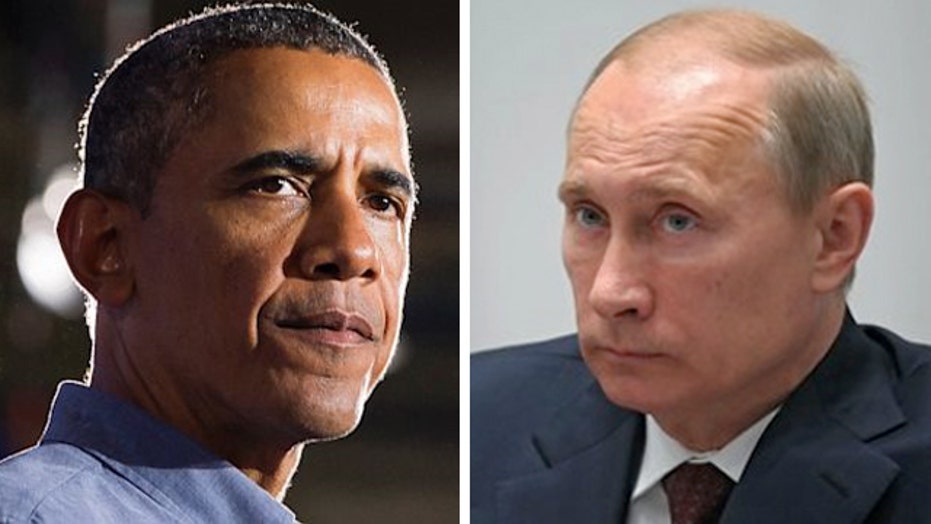 Tensions rise between US and Russia over efforts in Syria

Russian official calls on US to aid in Syria, warns of 'unintended incidents'

Russia's military build-up in Syria has grown to include the shipment of a half-dozen highly sophisticated battle tanks -- and more troops -- a defense official told Fox News, in what the source called the "first clear sign of offensive weapons arriving in Syria."

The Pentagon has now tracked a total of 15 Russian Antonov-124 Condor flights into Syria, reflecting a steady stream of military cargo into Syria. According to the latest intelligence, this also includes the arrival of two more Russian cargo ships, containing the tanks.

Up to this point, the official said, the Russian cargo and weapons that have been delivered to Syria could be viewed as defensive in nature. The arrival of tanks cannot be viewed this way.

The massive Condor flights carrying all kinds of supplies now arrive twice a day through Iran and Iraq into Bassel Al-Assad International Airport outside the port city of Latakia. The cargo is for Russian soldiers, not Syrian government forces, but is seen as a build-up to aid Bashar Assad's embattled regime.

The defense official, briefed on the latest satellite photos of the Syrian coastline, said: "This is the largest deployment of Russian forces outside the former Soviet Union since the collapse of the USSR."

The two additional Russian ships arrived over the weekend in Tartus, a Syrian port used by the Russian Navy since the '70s. The ships offloaded additional troops and armor and, for the first time, a half-dozen third-generation T-90 main battle tanks.

While not publicly confirming the arrival of Russian tanks into Syria, Pentagon spokesman Capt. Jeff Davis told reporters on Monday that the activities "suggest the establishment of a forward air operating base."

In addition to the influx of tanks and artillery, 35 armored personnel carriers, similar to the U.S. Army's Bradley fighting vehicles, have come ashore in Syria on top of dozens that arrived last week.

Additional housing units also have been seen from overhead by the U.S. military, making it possible for the Russians to house up to 1,500 combat troops.