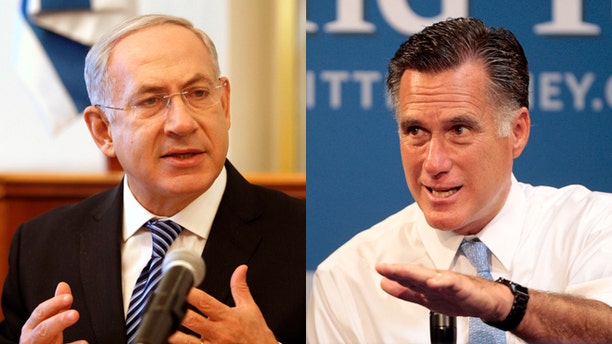 Mitt Romney set out Wednesday on an international journey that will allow the business-minded candidate to burnish his foreign policy creds and showcase something he has that President Obama doesn't -- a longstanding personal relationship with Israeli Prime Minister Benjamin Netanyahu.

While an incumbent president almost always has the advantage when it comes to foreign policy, the Republican challenger could use his six-day tour to highlight Obama's alleged trust deficit with Israel. And what better way for Romney to do that than by spending quality time with his former colleague, who also happens to lead Israel?

The connection between Romney and Netanyahu goes back decades. It started in the mid-1970s when they were corporate consultants at the Boston Consulting Group and has lasted nearly 40 years -- with Netanyahu, the world-wise politician, occasionally offering advice to Romney, the successful financier turned politician.

Yet the friendship until recently had gone largely unnoticed, or at least until Romney emerged as the likely 2012 GOP presidential nominee and during a primary debate brought attention to it. Responding to a controversial statement Newt Gingrich had made about Palestinians, Romney said: "Before I made a statement of that nature, I'd get on the phone to my friend Bibi Netanyahu" and ask for his advice.

Though Republican and Democratic strategists differ over what impact Romney's trip will have on the November election, both sides agree Israel is an essential U.S. ally in the unstable Middle East and that Romney will surely make the most of his relationship with Netanyahu.

"Israel is paramount to peace in the Middle East, more so than places like France, Great Britain and China," said Tyler Harber, a Republican strategist and partner in the Washington-area firm Harcom Strategies. He said Romney aides realize the strategic importance of the Israel stop -- between scheduled visits to England and Poland -- because they know American voters pay close attention to Israel and forging strong ties in that country could help Romney improve his stature among Jewish voters back home who typically vote Democrat.

"They understand what's important is this environment," Harber said. "And the visuals of going to Israel are good."

Romney's visit also highlights the trouble the Obama administration has had with Israel, and the fact that the president hasn't visited Israel since taking office -- though he did visit during the 2008 campaign.

U.S. relations with Israel have always been complicated, but political analysts say Obama made the situation more difficult by attempting -- at least initially -- to build bridges with such bitter Israeli enemies as Iran.

As recently as Tuesday, Romney seized on that point during a speech at the national convention of the Veterans of Foreign Wars, describing the U.S. attitude toward Israel as "shabby treatment."

"President Obama is fond of lecturing Israel's leaders," Romney said. "The people of Israel deserve better than what they have received from the leader of the free world. And the chorus of accusations, threats and insults at the United Nations should never again include the voice of the president of the United States."

Obama addressed the same convention a day earlier, though, and shared at least one common theme with Romney. They both said the 21st Century must be an "American Century."

Still, Netanyahu remains publicly neutral in the 2012 race, knowing, as Harber points out, that "backing the wrong horse would hurt his position."

Netanyahu, when asked earlier this week on "Fox News Sunday" about the race, said: "You're not going to pull me into your politics."

Though Democrats and Republicans agree, even for different reasons, that Romney must make such a trip to prove his foreign diplomacy skills, they also concede it has become almost a right-of-passage for a presidential candidate considering the big trip Obama made during his 2008 campaign and others.

"These trips are pro forma," said Ben Tulchin, Democratic strategist and president of San Francisco-based Tulchin Research. "The candidates want to create a picture of them going as commander in chief."

Tulchin thinks the trip will at least help Romney change the narrative about his career at Bain Capital and whether the private equity firm outsourced U.S. jobs under his leadership.

He also thinks Romney is taking a risk by "playing on the opponent's turf," considering Obama's foreign policy record and how difficult it could be for Romney to use a successful trip to help win Jewish votes.

"The Obama campaign would love the debate to be about foreign policy," Tulchin said.

Tyler Griffin, a Republican strategist and partner in Washington-based Hamilton Place Strategies, points out that Obama's perceived concessions to countries hostile to the U.S. and Israel essentially occurred early in his administration but that Romney still must travel to Israel to "make his case for being president."

He also said that in such a close race, with Florida perhaps being the pivotal state, winning over even a small percentage of Jewish voters might be critical.