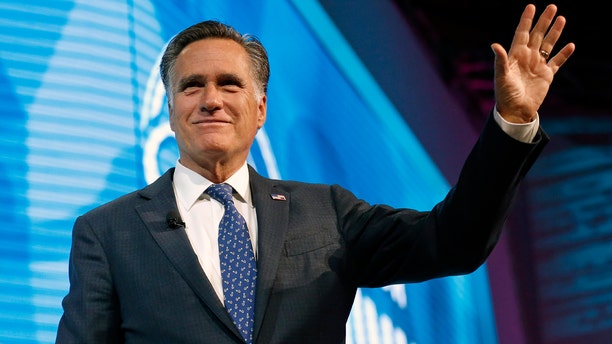 Mitt Romney, at a debate Tuesday night, didn't directly answer when asked if he stood by his previous criticisms of President Trump. (AP Photo/Rick Bowmer)

Romney called Trump a "phony, a fraud" during the 2016 presidential campaign, and said he was playing the American people for "suckers."

He also said that candidate Trump's "promises are as worthless as a degree from Trump University" -- prompting Trump to hit back and call Romney, who lost his bid to challenge President Barack Obama in 2012, a disloyal "choke artist."

But on Tuesday, when asked whether those comments were reflective of his current views, Romney appeared to hedge.

"I don't want to talk about everything that the president says."

"I don't think it makes sense to be talking about impeachment, not for a sitting president," he said, responding to a previous comment in the debate. "There are, however, times when I think the president has said things that I think are divisive or racist and misogynistic. I will speak out about those things. ... I don't want to become a gadfly, talking day after day about everything that the president says day to day. I don't always agree with what he says or with his tweets."

Romney said that while he disagreed with Trump's decision to pull out of the Trans-Pacific Partnership and had some concerns about his sweeping imposition of tariffs (which Romney said could ultimately "work out well" if they convince China and other countries to treat the U.S. more fairly), he supported Trump's tax cuts and "wise" deregulation agenda.

Asked whether Trump had redeemed himself, Romney said only: "I'm not going to characterize specifically my comment in that regard -- in the past. I'm going to talk about the future, where we're going at this stage."

"What he's done positively in my view, is take action that has helped encourage our economy to add thousands and thousands of new jobs, to allow us to have more markets to go into."

Still, Romney didn't entirely give Trump a free pass Tuesday night. Responding to a question about the treatment of illegal immigrants, he chracterized the administration's separation of children from their families at the border a “heartbreak" and a "dark chapter in American history."

"This is inexcusable and can't go on,” Romney said.

In June, Trump signed an executive order to allow children to stay with parents caught crossing the border illegally. But the administration vowed to continue its so-called "zero-tolerance" policy against illegal immigration, meaning it would continue to pursue criminal charges against those caught illegally entering the country. Those charges, under pre-existing law, triggered family separations in some instances.

Romney said he was not "too optimistic" about whether the administration would continue to make progress on North Korea. Secretary of State Mike Pompeo said this week that there has been major recent progress on denuclearizing the regime, with North Korea indicating it's ready to allow an international group of inspectors into the country’s clandestine nuclear and missile sites.

Identifying what he considered the biggest threats against the U.S., Romney mentioned China and Russia. In 2012, Obama mocked Romney for suggesting that Russia posed a significant threat to the U.S.

"The 1980s are now calling to ask for their foreign policy back," Obama said. "The Cold War has been over for 20 years."