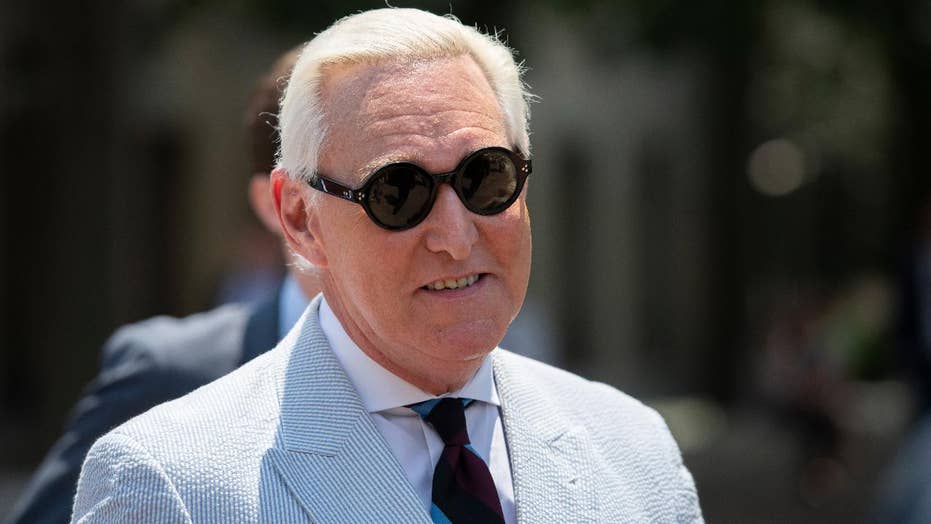 Jury selection in the trial of President Trump's longtime friend and confidant Roger Stone began on Tuesday and included medical issues involving both the defendant and a spectator.

Stone was sent home after telling U.S. District Judge Amy Berman Jackson he was sick with food poisoning. Shortly before that, a man collapsed in the courtroom and was attended by Stone’s daughter, a trauma nurse, before he was wheeled away on a stretcher.

The extraordinary spectacle seemed to be in keeping with the style of the conservative provocateur, who is facing federal charges of witness tampering and obstruction of a congressional inquiry. Prosecutors say Stone lied to Congress about his interactions with WikiLeaks, which published stolen emails from the Democratic National Committee and Hillary Clinton's presidential campaign in 2016.

Jackson spent the early part of the session fending off attempts by Stone's lawyers to exclude any potential jurors who worked in the U.S. government or had a negative view of Trump. Jackson pointed out that excluding all government workers may be impossible given the nature of the District of Columbia jury pool and rejected the notion that a juror opposed to Trump would be unfair to Stone.

ROGER STONE HEADS TO TRIAL IN MUELLER OFFSHOOT CASE, AFTER MONTHS OF OPEN CONFLICT WITH JUDGE

"The defense has assumed bias that has not been shown on the part of those people," she said.

Sure enough, the first potential juror was a woman who had worked in the Office of Management and Budget in the Obama White House and whose husband is a lawyer in the Department of Justice.

Just after lunch, Stone told Jackson “I have, apparently, some food poisoning."

“I don’t want to waste the court’s time or the time of the jurors," he said.

Jackson reminded Stone that he has an “absolute constitutional right” to be present for all parts of his trial, including jury selection, but assured him that he will be represented by his attorney in his absence.

“I hope you get the rest and attention you need and that you are feeling better tomorrow,” Jackson said as she allowed Stone to leave the courtroom with a Gatorade bottle, and his wife and daughter at his side.

Opening statements in the case-- which is an offshoot of former Special Counsel Robert Mueller's nearly two-year-long investigation into possible collusion between Trump's presidential campaign and Russia to interfere in the 2016 elections-- are expected to begin on Wednesday but could be delayed if Stone is unable to appear in court due to his illness, Fox News has learned.

Stone, who briefly worked on Trump's campaign before he was ousted due to infighting with campaign manager Corey Lewandowski, has done little to tamp down his theatrics ahead of the highly anticipated trial.

Following his January arrest in a dramatic nighttime raid by a heavily armed federal tactical team, he drew the ire of Jackson's when he posted a photo to Instagram that appeared to show the judge with gun crosshairs behind her.

“Through legal trickery, Deep State hitman Robert Mueller has guaranteed that my upcoming show trial is before Judge Amy Berman Jackson, an Obama appointed Judge who dismissed the Benghazi charges against Hillary Clinton and incarcerated Paul Manafort prior to his conviction for any crime,” Stone’s post was captioned.

Stone has also remained active socially, holding an event on Saturday in Miami where he sold t-shirts and books to raise money for legal fees and has continued to slam the impeachment inquiry against Trump as "the most partisan one party impeachment since Bill Clinton."

The indictment against Stone alleges that he repeatedly discussed WikiLeaks in 2016 with campaign associates and lays out in detail Stone's conversations about emails stolen from Clinton campaign chairman John Podesta and made public in the weeks before Trump beat Clinton.

After WikiLeaks released hacked emails from the DNC on July 22, 2016, the indictment says, a senior Trump campaign official "was directed" to contact Stone about additional releases and about "what other damaging information" WikiLeaks had "regarding the Clinton campaign." The indictment does not name the official or say who directed the outreach to Stone.

Fox News' Gregg Re, Jake Gibson and the Associated Press contributed to this report.