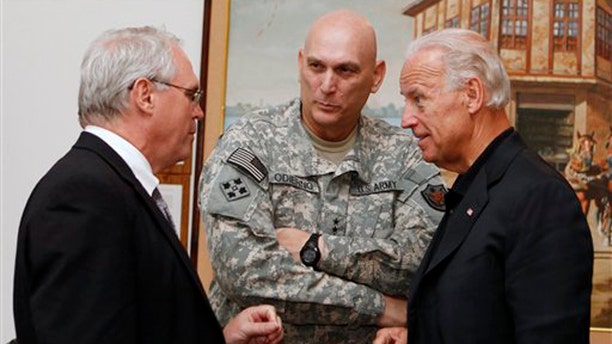 Rockets were fired at the U.S. embassy in Baghdad while Vice President Biden visits Iraq.

The rockets were fired at the embassy, located inside the International Zone.

Vice President Biden is currently in the country to meet with U.S. troops and talk to Iraqi political leaders.

Two soldiers inside the compound reported there was an impact from the incoming fire.

An all clear was given after the attack.

"According to Embassy Public Affairs there was a small explosion in the International Zone," a U.S. Embassy spokesperson said. "The incident is being investigated. There were no injuries or property damage."

The attacks in Mosul and Ramadi underscored persistent fears that insurgents will exploit Iraq's political uncertainty to stoke widespread sectarian violence. Four people were killed and 25 injured in the two blasts that occurred hundreds of miles apart.

The twin explosions on the Fourth of July illustrated the vexing nature of the U.S. involvement in Iraq and its efforts to nudge the country toward stability and democracy.

On his fifth trip to Iraq since he was elected, Biden sat down separately with Prime Minister Nouri al-Maliki, a Shiite who is struggling to keep his job after his party lost the March 7 election, and his chief challenger, former premier Ayad Allawi.

The Sunni-backed Iraqiya political alliance that Allawi heads won the most seats in the vote, but it fell far short of securing enough seats in parliament to control the government. That has led to four months of both men trying to woo support from allied lawmakers, ultimately delaying the decision of who will be the next prime minister.

Biden made clear that a government that is not represented by all sides -- no matter who leads it -- will fall short of a thriving democracy.

"All are going to have to play a meaningful role in this new government in order for it to work," Biden told Iraqi leaders of some of the top vote-getting political coalitions at a U.S. Embassy reception Sunday evening. "My plea to you is finish what you started."

Earlier, talking to U.S. troops, Biden said: "When the new government is formed, it will mark something absolutely extraordinary: a peaceful transition of power encompassing all the people of Iraq, maybe for the first time in their history."

Biden met first with Allawi, where he was kept waiting for a few minutes at the home of Deputy Prime Minister Rafia al-Issawi, an Iraqiya lawmaker. After the hourlong, closed-door talk, Allawi said that Biden offered no specific proposals to end the impasse "but there was an interest in Iraq's stability, and that the forming of the government should not be prolonged."

Several hours later, al-Maliki spokesman Ali al-Dabbagh said Biden warned the prime minister in their 90-minute meeting that delays in forming the government "will bring crisis in Iraq, and the political alliances should make an effort to avoid this crisis."

Al-Dabbagh, who attended part of the meeting between the two, said Biden also expressed fears by the Obama administration over "the regional interference in Iraq." That generally refers to Iranian meddling, but al-Dabbagh said Biden did not single out any nation.

A statement on the prime minister's official website said al-Maliki and Biden also discussed the U.S. troop withdrawal that is scheduled to bring the number of American soldiers in Iraq to 50,000 by the end of August. After a peak of about 170,000 just a few years ago, all troops are set to leave Iraq by December 2011.

The military drawdown also has alarmed some Iraqis who believe their own security forces are not ready to protect them from a dwindling insurgency still strong enough to attack.

Around 9 a.m., a female suicide bomber blew up a reception room outside the Anbar provincial governor's office in Ramadi, about 70 miles west of Baghdad, local councilman Aeefan Sadoun said. Four people were killed and 23 injured. The governor was not among them.

The targeting of government offices is a hallmark of al-Qaida in Iraq, which may have sought to use Biden's visit and the U.S. Independence Day holiday as a reminder of Iraq's continuing instability.

Biden is keenly aware that Iraq's security could crumble if formation of a new government results in alienating any of Iraq's mainstream political groups. However, he pointedly did not meet with lawmakers aligned with anti-American cleric Muqtada al-Sadr, whose followers captured 40 of the 163 seats in parliament.

The U.S. does not consider the Sadrists a legitimate political entity, and Sadrists have long targeted American troops in Iraq.

Biden will meet Monday with Shiite cleric Ammar al-Hakim, leader of the Iraqi National Alliance, which has joined forces with al-Maliki, and with President Jalal Talabani, a Kurd.

Mahmoud Othman, a senior Kurdish lawmaker in Iraq's parliament, said it was too soon to tell if Biden would be able to break the political deadlock.

"This will depend on to what extent the political parties will be flexible," Othman said in an interview. "But if they stay adamant to their demands then, in my opinion, it will be hard to go forward."