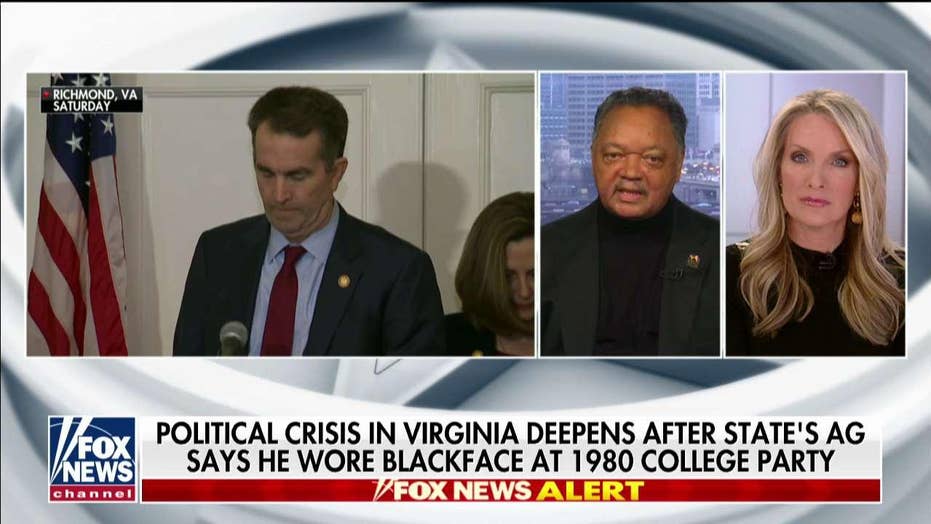 The Rev. Jesse Jackson isn’t surprised about the ongoing racism controversy in Virginia, where Democratic Gov. Ralph Northam and the attorney general are both caught up in blackface scandals, but says the situation's about more than just blackface.

“The legacy of slavery and segregation and degradation is well placed, and I would suspect these humiliating black-faced type minstrel stuff is taking place in a lot of frats right now,” Jackson said Wednesday on Fox News’ “The Daily Briefing with Dana Perino.”

Over the weekend, photos of Northam surfaced from his medical school yearbook, showing someone in blackface next to a man wearing a Ku Klux Klan costume. Democrats and Republicans, alike have called for Northam’s resignation, but the governor, at this point, has refused and now claims he was not in that photo. He has acknowledged wearing blackface at an event where he was dressing as pop star Michael Jackson.

On Wednesday, Virginia's Attorney General, Mark Herring, the next in the line of succession, posted a lengthy statement admitting he, too, donned blackface during a college party in 1980. Herring confessed to wearing brown makeup and a wig to look like a black rapper during a party at the University of Virginia.

Perino pointed out that Jackson recently wrote in an op-ed that Northam should resign and asked if he feels the same way about the AG.

“They must apologize to the people who got their vote, that they offended,” Jackson said. “They have the power to redeem them or reject them.”

Jackson then rattled off other examples of racism among prominent politicians, including Florida Gov. Ron DeSantis’ infamous “monkey” comment. (He was accused of telling voters not to "monkey this up" by voting for gubernatorial nominee Andrew Gillum, who is black.)

“It’s deeper than just blackface,” Jackson said. Racist costumes are bad enough, he said, but things can get worse if such racism seeps into legislation or policy.

“That’s when it really hurts,” he said.

Jackson went on to say that the people affected by the issue are the ones who need to decide whether or not the blackface scandals should be career-ending.

“They will determine the fate, because … they have power of being the redeemer,” he said. “This legacy of racial degradation, racial exploration, it’s deep and ugly.”