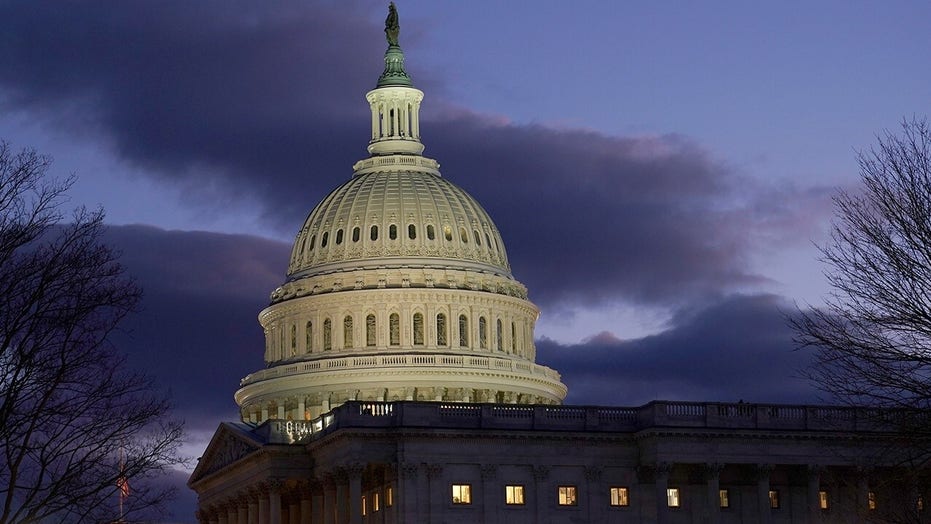 After President Biden outlined his proposal for a massive $2 trillion spending bill on Wednesday, a bevy of Senate Republicans are speaking out against the plan in harsh terms.

The opposition is coming even from moderates who attempted to work with Biden on the coronavirus stimulus bill. This makes it even more likely that Democrats will be forced to invoke budget reconciliation yet again if they want to pass what Biden called "the largest American jobs investment since World War II."

"I support improving America’s aging roads, bridges, ports, and other infrastructure. And we can do so in a bipartisan way," Sen. Rob Portman, R-Ohio, said Wednesday. But, he said, Biden's plan is far too expensive and does not focus on infrastructure, as the White House is framing it.

"At its core, the president’s plan calls for a $620 billion investment in transportation infrastructure. However, the total soars to $3 trillion with its inclusion of these broad policy priorities that are a far cry away from what we’ve ever defined as infrastructure," Portman said. "The Biden Administration’s plan redefines infrastructure to include hundreds of billions of dollars of spending on priorities like health care, workforce development, and research and development."

Portman was one of the 10 Republicans who in February traveled to the White House to meet with Biden on a potential bipartisan coronavirus stimulus — only to be rebuffed as Democrats refused to compromise on any element of the bill. Another of those senators, Shelley Moore Capito of West Virginia, also said Biden's proposal is a nonstarter.

"While the president unveiled a partisan proposal that goes far beyond what constitutes as infrastructure, the Senate continues negotiations between members of both parties," said Capito, the ranking member on the Senate Environment and Public Works Committee.

She added: "President Biden’s so-called ‘jobs’ proposal is a clear attempt to transform the economy by advancing progressive priorities in an unprecedented way. The proposal would aggressively drive down the use of traditional energy resources and eliminate good-paying jobs in West Virginia and across the country. Perhaps worst of all, it would burden the American economy with tax increases as our country attempts to recover from economic hardship."

"I am concerned in the level of our national debt. We’ve reached a critical point here. And I hope we’re not beginning to engage in a habit of any time we want to do something, call it a national emergency and run up the national debt," McConnell said in Kentucky. "Twenty-seven trillion dollars. The same size as our economy. For the first time since World War II."

Sen. Rob Portman, R-Ohio, questions Homeland Security Secretary nominee Alejandro Mayorkas during his confirmation hearing in the Senate Homeland Security and Governmental Affairs Committee on Tuesday, Jan. 19, 2021. Portman, who was one of 10 Republicans to try to negotiate with President Biden on coronavirus relief, slammed the president's infrastructure proposal Wednesday as having little to do with actual infrastructure.  (Bill Clark/Pool via AP)

The Biden White House says the plan will be paid for by corporate tax hikes.

In a separate statement, the minority leader also accused Biden of selling an "infrastructure" bill which is actually a "Trojan horse" for other priorities.

"This plan is not about rebuilding America’s backbone. Less than 6% of this massive proposal goes to roads and bridges," McConnell said. "It would spend more money just on electric cars than on America’s roads, bridges, ports, airports, and waterways combined."

Indeed, the White House summary of the American Jobs Plan says it will spend "$115 billion to modernize the bridges, highways, roads, and main streets that are in most critical need of repair" out of the total $2.2 trillion in the plan.

The White House, meanwhile, is framing its proposal, called the American Jobs Plan, as an investment in a very broad definition of infrastructure that will modernize the U.S.'s economy and uplift those who are struggling the most.

"It's time to build our economy from the bottom-up and the middle-out, not the top-down," Biden said in remarks unveiling the plan in Pittsburgh Wednesday. "And this time when we rebuild the middle class, we're going to bring everybody along regardless of your background, your color, your religion, where everybody gets to come along."

The White House's spending breakdown of its plan, it says, includes $620 billion for roads, bridges and ports; $400 billion for elderly home care; $580 billion on job training, R&D and clean energy; and $650 billion on the electric grid, broadband and water systems.

In the $620 billion for roads bridges and ports, the White House lumps in $174 billion for electric vehicles — more than it is spending on any other individual item in that category.

In this image from video, Senate Minority Leader Mitch McConnell of Ky., speaks after the Senate acquitted former President Donald Trump in his second impeachment trial in the Senate at the U.S. Capitol in Washington, Saturday, Feb. 13, 2021. McConnell on Wednesday said the plan President Biden is selling as an infrastructure bill is actually a "Trojan horse" that has little to do with infrastructre.  (Senate Television via AP)

"The American jobs plan will modernize 20,000 miles of highways, roads and Main Streets that are difficult, difficult shape right now," Biden added. "It will fix the nation's 10 most economically significant bridges in America that require replacement."

On elderly home care, the White House frames that spending as an investment in "our care infrastructure."

"I will not support a sweeping spending spree full of pet projects for Democrats that are not paid for and that advance the Green New Deal under the guise of infrastructure using the money of hardworking Tennessee taxpayers," Sen. Bill Hagerty, R-Tenn said.

Added Sen: John Barrasso, R-Wyo., the chair of the Senate Republican Conference: "The plan President Biden unveiled today is an out-of-control socialist spending spree... President Biden should change course and look to our bipartisan highway bill from the last Congress if he is really interested in improving our infrastructure."

"This $2 trillion plan is really just the Green New Deal-lite masquerading as an infrastructure plan. President Biden is attempting to make good on his promise to transform America's blue-collar economy into a ‘green' economy," Sen. Ted Cruz, R-Texas, said.

White House press secretary Jen Psaki said on MSNBC Wednesday that the president intends to work with Republicans with the aim of getting bipartisan agreement on the president's plan, and that he is open to changes.

White House press secretary Jen Psaki speaks during a briefing at the White House, Monday, March 29, 2021, in Washington. Psaki said the White House wants to work with Republicans on President Biden's "American Jobs Plan," but it remains to be seen how much ground Democrats are willing to give to get Republicans on board.  (AP Photo/Evan Vucci)

But it remains to be seen how much the White House and Congressional Democrats are willing to change in their plan for the sake of getting GOP votes. Meanwhile, Democrats in Congress are prepping to push through the bill using the process of budget reconciliation. Such a move -- which was used for the Democrats' coronavirus stimulus that passed without GOP votes -- would allow them to get around the 60-vote Senate filibuster, making compromise with Republicans unnecessary.

An aide for Senate Majority Leader Chuck Schumer, D-N.Y., said that Democrats are in the process of arguing to the Senate parliamentarian that a provision in the law that allows for the reconciliation process would let Congress essentially amend any past reconciliation bills. There are two reconciliation vehicles allowed for each two-year Congress, and Democrats already used one to pass the coronavirus stimulus.

The parliamentarian has the final word on if this loophole actually exists. But if it does, it could let Democrats pass Biden's current American Jobs Plan then triple or quadruple dip on reconciliation measures by simply amending ones they've already passed.

Democrats will have to tread lightly if they go this route, however, as their slim majorities give them little margin for error even when they are cutting out Republicans.

Rep. Alexandria Ocasio-Cortez, D-N.Y., on Tuesday said that Biden's $2.2 trillion plan doesn't spend "nearly enough," pointing out that the money would be spread over approximately a decade. Meanwhile, Sen. Joe Manchin, D-W.Va., who Senate Democrats cannot lose and still be able to pass a bill without GOP support, has said he won't back reconciliation unless Democrats at least try to negotiate with Republicans.

"I am not willing to go into reconciliation until we at least give bipartisanship, or get working together, or allow the Senate to do its job. Just by assuming that 'Hey, they'll never work with us...' I don't subscribe to that," Manchin said on NBC about an infrastructure bill. "There's no need for us to go to reconciliation until the other process has failed. That means the normal process of a committee, a hearing, amendments."

Nevertheless, Schumer on Wednesday urged the quick passage of "a big, bold plan."

"Addressing infrastructure, climate and environmental justice together, and creating millions of good paying jobs, is just the right combination to meet head on the challenges that America now faces," Schumer said. "This will not only make clean energy and clean transportation affordable, it will create millions of new jobs with good wages, which always occurs when we invest in infrastructure and manufacturing as we will be doing here."