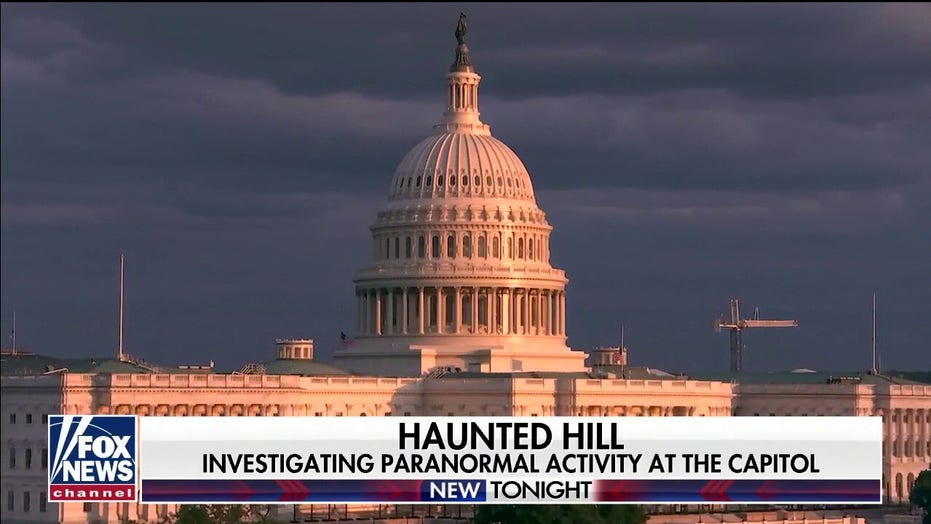 It’s nearly Halloween. And if you cover Congress, that means you still have plenty of fodder for All Hallows Eve.

Some politicians naturally have skeletons in their closets. But some real skeletons haunt Capitol Hill.

Congressional Cemetery, blocks from the U.S. Capitol, is one spooky spot. Visitors can wander the graveyard this time of year for "Souls Strolls" – guided, nocturnal tours between the headstones.

Lots of lawmakers, statesmen and famous Americans are buried there. The lawmakers, after they "yield back their time," of course.

American bandleader and composer John Phillip Sousa. Legendary FBI Director J. Edgar Hoover. You’ll find the resting place of congressman and Vice President Elbridge Gerry (pronounced with a hard G). In fact, it is Gerry from whom we derive the term Congressional gerrymandering (soft G). That’s the practice of manipulating the boundaries of a House district to favor one party or another. "Gerrymandering" is a made-up word, merging "Gerry" and "salamander." In an early 19th century political cartoon, a Boston newspaper drew a Congressional district to look like a mythical, menacing salamander.

One should note the gerrymandering phenomenon in politics when you visit Congressional Cemetery, check out the positioning of Gerry’s grave. It’s kind of wedged in with a shoehorn among the other tombstones.

But some things at Congressional Cemetery are a little grisly. Arctic explorer William Cross is buried at Congressional Cemetery. He died during an 1881 expedition to the North Pole. Cross froze to death. When undertakers finally got Cross’s body they found it had been butchered. It was thought Cross’s colleague devoured him in the cold to survive.

So, in the interest of accuracy, we should say that some of William Cross is buried at Congressional Cemetery.

A Memorial Day, silent and solemn, at Arlington National Cemetery. The VA has been looking at the issue of veteran suicides. (iStock)

You’ll also find the grave of Tobias Lear. Washington, D.C., is a town about access. And Lear may have in fact have been the first man in Washington who could brag about his "access." Lear was George Washington’s personal secretary. If you needed to see the big guy, Lear was the gatekeeper.

Regardless, Lear’s impressive job may have weighed on him. Lear shot and killed himself and is buried at Congressional Cemetery near a fence line.

But despite these ghastly tales, the U.S. Capitol itself is the true home of Congressional macabre.

"Any building with a 200-plus-year history, and, especially, as fraught a history as has been seen in the United States Capitol, is bound to have some intrigue and perhaps a little bit of history that's difficult to explain," said Sam Holliday of the U.S. Capitol Historical Society.

For instance, late at night, at the Capitol, you may hear the ghost of late Sen. Boies Penrose, R-Penn., rocking away, as he reads legislation, cover to cover. Penrose liked to sit in a rocking chair in his office in the Capitol and read the bills late at night. It is said you can sometimes still hear Penrose’s rocking chair after hours.

THE CAPITOL RIOT AND REVISIONIST HISTORY: THE BATTLE OVER THE JAN. 6 LEGACY

The military converted the Capitol Rotunda into a field hospital for Union soldiers during the Civil War. Capitol Hill veterans have reported sightings of those soldiers wandering the building even today.

"Some of them have continued to stay here. A lot of soldiers died here," said Steve Livengood of the U.S. Capitol Historical Society. "They were very idealistic at that point and their spirits would be here, making sure that we continue to carry out the ideas that they were fighting for. And, that they died for."

The voice of President and later congressman John Quincy Adams is said to haunt Statuary Hall at the Capitol. Adams died in what was then the Speaker’s Office just off Statuary Hall back when it served as the House chamber.

"People said they could hear his voice," said Livengood. "I’ve actually heard a voice in there. I don’t know if it’s John Quincy Adams. But I’m assuming it is."

It is also said that, on New Year’s Eve, the statues inside Statuary Hall climb down from their pedestals and begin to dance and frolic. This supposedly happens on New Year’s Eve because there is rarely anyone in the Capitol at that time. That said, Congress has been in session on New Year’s Eve several times in recent years. So perhaps that apparitional phenomenon has ceased.

Regardless, Livengood has reasons to doubt this annual caper.

Deep in the bowels of the U.S. Capitol, two levels directly before the Rotunda floor and precisely in the dead-center of the building, is a small room.  (Chad Pergram/Fox News)

That’s because one of the statues in Statuary Hall is of Francis Willard of Illinois. She led the Women’s Christian Temperance Union, which fought for prohibition.

"Francis Willard would never allow any dancing. That’s because dancing could lead to drinking," said Livengood.

The legend of the "demon cat" is one of the most startling of Capitol ghost stories.

"The demon cat prowls about the halls of the Capitol when things are quiet and empty and dark," said Holliday.

Holliday says the demon cat notoriously appears before national emergencies. Watchmen and aides have spotted the cat at the Capitol before the Civil War, Pearl Harbor, the assassination of President John F. Kennedy and other frightening events.

If you look closely, you can spy tiny, paw prints embedded in the floor near the old Supreme Court chamber in the Senate wing of the Capitol. And, supposedly, the frightening feline signed his initials on an obscure Senate stairwell. Emblazoned into the top of the steps are two initials: "DC."

A skeptic might say that the "DC" stands for something else: District of Columbia? Direct current? Detective Comics?

You think Congress gets a hostile press now? Try back in 1890. Actual drops of blood from the late Rep. William Taulbee, D-Ky., are pressed into the marble of a Capitol staircase near the House chamber. Taulbee didn’t like a reporter from Louisville named Charles Kincaid publishing an account of an alleged affair he had with a government employee. Taulbee often harassed Kincaid. Kincaid finally had enough of it. He shot and killed Taulbee.

A statue of George Washington stands in the Rotunda of the U.S. Capitol Aug. 28, 2012 on Capitol Hill in Washington, D.C.  ((Photo by Alex Wong/Getty Images))

"Marble is a porous, stone material. It can absorb different liquids when it hits and sets," said Holliday, explaining the blood, visible even today.

As you may imagine, Taulbee hated reporters. And the legend goes that Taulbee’s ghost sometimes trips members of the press corps as revenge.

"I have been going up and down (those) stairs now since 1965," said Livengood. "I have never tripped. Only reporters."

Perhaps this explains how yours truly once prodigiously tripped, on camera, complete with feet flying up in the air, on a nearby staircase a few years ago while trying to get an interview with Canadian Prime Minister Justin Trudeau. Trudeau was at the Capitol to meet with House Speaker Nancy Pelosi, D-Calif. Trudeau didn’t answer my questions. But he did help me get back up.

Could this have been Taulbee’s ghost, lurking elsewhere in the Capitol?

"Yes, Taulbee's ghost is around the building and he does not like reporters," said Livengood.

"It sounds like you're fortunate to escape as unscathed as you were," added Holliday.

In the interest of full disclosure, I’m someone who kind of believes in ghosts. I’ve seen a few things here and there. Especially at nighttime. But despite spending years in every corner of the U.S. Capitol, at all times of the day and night, I have never seen any spectral phantasms.

Livengood says he often spies ghosts after an evening reception at the Capitol.

WASHINGTON, DC - DECEMBER 18: The House of Representatives continues to debate two Articles of Impeachment of President Donald Trump at US Capitol on December 18, 2019 in Washington, DC. The House began seven hours of debate on the two Articles this morning before the planned vote later in the evening. (Photo by Samuel Corum/Getty Images)

"When you’re at a reception, you’re still working," said Livengood. "I’m an historian. The wine facilities what I do, which is thinking about and communicating with the spirits that founded this country and are embodied in this building."

But you don’t have to be on the sauce to spot a few ghosts at the Capitol.

Joe Novotny just retired after working at the Capitol for three decades. In fact, you’ve probably seen Novotony if you’ve watched the House proceedings on C-SPAN. Novotony served as the House Reading Clerk for the past 11 years. Novotony said he saw something weird inside the House chamber a few years ago, late at night, after everyone else was gone.

"All of a sudden, in the Chamber directly in front of me, I see a man walk in front of me. I look up immediately to see who it is. And there was nobody there," said Novotny. "It's also one of those things where you tell yourself, ‘Is this real?’ It was vivid. It was vivid enough that it made me take notice. And it made me feel like I wasn't alone."

Another haunted tale to add to the list at the Capitol.

"Ghost stories are history by another name," said Holliday. "It’s popular history. It's a way that people can remember."

It’s impossible to prove whether or not the U.S. Capitol is actually haunted. But it’s kind of like what Stephen King once said: "Sometimes we make up horrors to help us cope with the real ones.’"