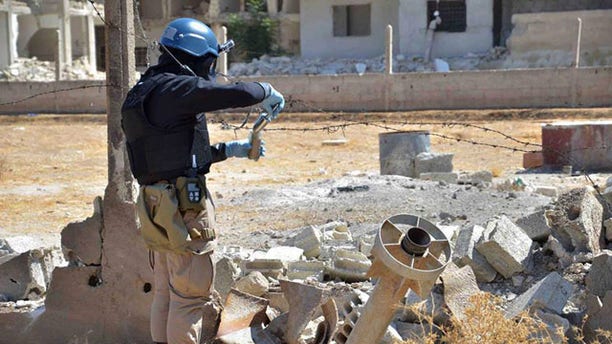 August 28, 2013: In this citizen journalism image provided by the United media office of Arbeen which has been authenticated based on its contents and other AP reporting, a member of a UN investigation team takes samples of sands near a part of a missile is likely to be one of the chemical rockets according to activists, in the Damascus countryside of Ain Terma, Syria. (AP Photo/United Media Office of Arbeen, File)

A report by the Office of the Director of National Intelligence into an alleged chemical weapons attack in Syria earlier this month says that President Bashar al-Assad's forces were likely behind the attack, but admits that there are questions left open by the current intelligence picture.

Multiple U.S. officials have told the Associated Press that the evidence against Assad is "not a slam dunk," and questions remain regarding who actually controls some of Syria's chemical weapons stores and whether Assad himself ordered the attack. Select members of the House and Senate, as well as party leaders with intelligence, foreign policy, and defense portfolios were to be briefed on the intelligence Thursday evening.

Intelligence officials told AP they could not pinpoint the exact locations of Assad's supplies of chemical weapons, and Assad could have moved them in recent days as U.S. rhetoric builds. That lack of certainty means a possible series of U.S. cruise missile strikes aimed at crippling Assad's military infrastructure could hit newly hidden supplies of chemical weapons, accidentally triggering a deadly chemical attack.

Over the past six months, due to shifting front lines in the 2 1/2-year-old civil war and sketchy satellite and human intelligence coming out of Syria, U.S. and allied spies have lost track of who controls some of the country's chemical weapons supplies, according to one senior U.S. intelligence official and three other U.S. officials briefed on the intelligence shared by the White House as reason to strike Syria's military complex. All spoke on condition of anonymity because they were not authorized to discuss the Syrian issue publicly.

U.S. satellites have captured images of Syrian troops moving trucks into weapons storage areas and removing materials, but U.S. analysts have not been able to track what was moved or, in some cases, where it was relocated. They are also not certain that when they saw what looked like Assad's forces moving chemical supplies, those forces were able to remove everything before rebels took over an area where weapons had been stored.

In addition, an intercept of Syrian military officials discussing the strike was among low-level staff, with no direct evidence tying the attack back to an Assad insider or even a senior Syrian commander, the officials said. Fox News reported Tuesday that the intercepts were provided by a special intelligence unit of the Israel Defense Force and helped the White House conclude last weekend that the regime was behind the attack.

However, while Secretary of State John Kerry said Monday that links between the attack and the Assad government are "undeniable," U.S. intelligence officials are not so certain that the suspected chemical attack was carried out on Assad's orders, or even completely sure it was carried out by government forces, the officials said.

Ideally, the White House seeks intelligence that links the attack directly to Assad or someone in his inner circle to rule out the possibility that a rogue element of the military decided to use chemical weapons without Assad's authorization. Another possibility that officials would hope to rule out: that stocks had fallen out of the government's control and were deployed by rebels in a callous and calculated attempt to draw the West into the war.

The U.S. has devoted only a few hundred operatives, between intelligence officers and soldiers, to the Syrian mission, with CIA and Pentagon resources already stretched by the counterterrorism missions in Africa and the Arabian Peninsula, as well as the continuing missions in Afghanistan and Pakistan, officials said.

The quest for added intelligence to bolster the White House's case for a strike against Assad's military infrastructure was the issue that delayed the release of the U.S. intelligence community's report, which had been expected Tuesday.

President Barack Obama declared unequivocally Wednesday that the Syrian government was responsible, while laying the groundwork for an expected U.S. military strike.

"We have concluded that the Syrian government in fact carried these out," Obama said in an interview with "NewsHour" on PBS. "And if that's so, then there need to be international consequences ... We cannot see a breach of the nonproliferation norm that allows, potentially, chemical weapons to fall into the hands of all kinds of folks.

"If we are saying in a clear and decisive but very limited way, we send a shot across the bow saying, 'stop doing this,' that can have a positive impact on our national security over the long term," Obama said.

Administration officials said Wednesday that neither the U.N. Security Council, which is deciding whether to weigh in, or allies' concerns would affect their plans.

The uncertainty calls into question the statements by Kerry and Vice President Joe Biden.

"We ultimately, of course, hold President Assad responsible for the use of chemical weapons by his regime against his own people, regardless of where the command and control lies," Harf said.

Still, many U.S. lawmakers believe there is reasonable certainty Assad's government was responsible and are pressing the White House to go ahead with an armed response.

"Based on available intelligence, there can be no doubt the Assad regime is responsible for using chemical weapons on the Syrian people," said Sen. Saxby Chambliss of Georgia, the ranking Republican on the Senate Intelligence Committee. "Short of putting troops on the ground, I believe a meaningful military response is appropriate."

Others, both Democrats and Republicans, have expressed serious concern with the expected military strike, with one senior aide telling Fox News there are fears launching missiles at Syria could be a case of "fire and forget."

"We don't employ the US military just to make a point," one Congressional source who asked not to be identified tells Fox News.

House Speaker John Boehner also sent a letter to the White House Wednesday, asking Obama to "personally make the case to the American people and Congress for how potential military action will secure American national security interests, preserve American credibility, deter the future use of chemical weapons, and, critically, be a part of our broader policy and strategy."

The White House has not publicly commented on Boehner’s request.

British Foreign Secretary William Hague said Wednesday that all the evidence points in one direction.

"There is no evidence that any opposition group in Syria has the capability let alone the desire to launch such a large-scale chemical attack," Hague told Sky News.