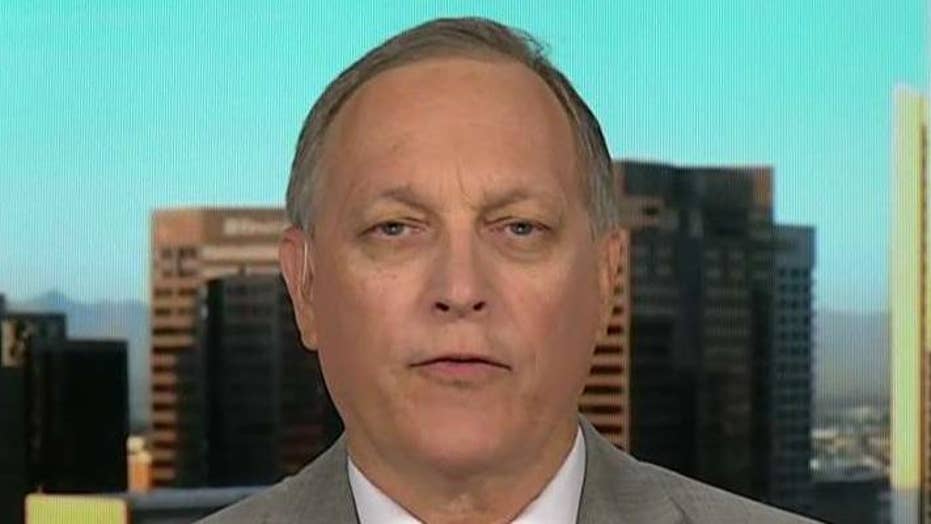 Rep. Biggs says he wasn't surprised by the IG report's findings on Comey

Arizona Republican Rep. Andy Biggs says former FBI Director James Comey had been indicating that he was above the fray when really he was in the middle of it.

Rep. Andy Biggs, R-Ariz., tore into James Comey Sunday, accusing the former FBI Director of not understanding the severity of – or even the problem with – his actions, as described in a recent report from the Department of Justice’s Inspector General.

Biggs referenced Comey’s reaction to the report, which suggested that he should receive an apology from those who accused him of leaking to the media. While the IG report did cite a lack of evidence that Comey leaked classified information to the media, it did point out that he leaked sensitive information about an ongoing investigation to a friend who then gave it to the media, and also failed to notify the FBI when he found out that other information he gave to his lawyers was later deemed classified.

JAMES COMEY NOT OUT OF THE WOODS YET AMID ONGOING PROBES

“I think Mr. Comey basically is just dodging and weaving and I don’t think he understands fully that what he did was even wrong,” Biggs told Fox News’ “Sunday Morning Futures.” Biggs went on to call Comey’s behavior “audacious in many respects.”

The report detailed how Comey acted outside the boundaries of DOJ and FBI rules when he kept memos that detailed conversations he had with President Trump. The IG’s office said that the memos were considered government documents, not personal ones, as Comey claimed. As a result, he had no right to keep them for himself or turn any of them over to anyone else.

In the moments after the report’s release, Comey tweeted, “DOJ IG ‘found no evidence that Comey or his attorneys released any of the classified information contained in any of the memos to members of the media.’ I don’t need a public apology from those who defamed me, but a quick message with a ‘sorry we lied about you’ would be nice.”

The report, however, chastised Comey for his actions, saying “Comey set a dangerous example for the over 35,000 current FBI employees—and the many thousands more former FBI employees—who similarly have access to or knowledge of non-public information.”

Biggs and his fellow Republicans are eagerly awaiting the results of other investigations, one from the DOJ IG’s office dealing with the FBI’s use of the Foreign Intelligence Surveillance Act (FISA) to conduct surveillance of former Trump campaign adviser Carter Page; another, a broader probe of the Russia investigation's origins, is being conducted by Connecticut U.S. Attorney John Durham.

"I anticipate that we're going to see some very stark revelations of manipulation of the whole system for political purposes," he said, "and when you see that happen, that's when I think you're going to see references or referrals for  indictments." Biggs claimed that the reports will uncover what was “essentially a coup attempt" against President Trump.

"I hope we see some accountability here."