"Rent is too Damn High" Candidate has Another 15 Minutes of Fame, Inspires Action Figure 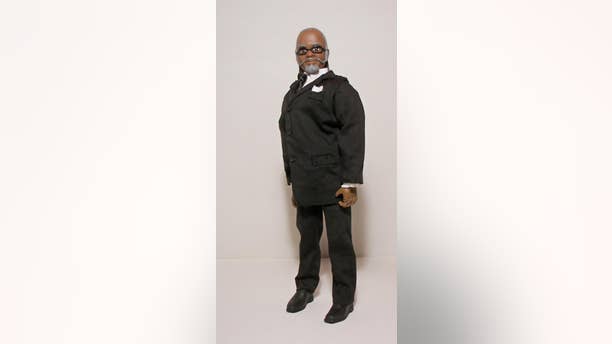 In this undated photo released by herobuilders.com, the Jimmy McMillan "The Rent is Too Damn High" doll is shown. Herobuilders.com, a Connecticut company that makes action figures is selling one of New York governor wannabe. (AP Photo/Herobuilders.com)

"The Rent is Too Damn High" party member and New York gubernatorial candidate Jimmy McMillan, just had his 15 minutes of fame extended...again. He's now getting his own action figure.

McMillan is one of the more memorable political characters of the 2010 midterm election cycle with his unforgettable beard, which just might have been a deciding trait to get him his own mini-toy figurine.

Herobuilders.com is marketing McMillan's action figure which will sell for about 50 bucks. According the website, there are two dolls available. The talking doll, which has McMillan saying his signature phrase "Rent is too Damn High," is available to purchase online for $49.95. There's also just a silent Jimmy McMillan doll available for $39.95.

He's not the first political figure to be turned into an action figure. The company has also produced popular figures like President Obama, first lady Michelle Obama, and Sarah Palin.

And if the action figure isn't even enough, McMillan's album will be released on Election Day. According to McMillan's website, you can purchase the album on iTunes.

McMillan first hit the national spotlight after appearing in the New York governor's debate where he proudly announced that he represented the "Rent is Too Damn High Party."

He was on stage aside mainstream candidates Democrat Andrew Cuomo and Republican Carl Paladino, and a few other lesser-known contenders.

But it was his unusual party name on top of his formal suit paired with his black gloves and well-groomed beard that got everyone's attention, standing out from typical debates that can often be full of policy blabber.

Even Cuomo, who is currently ahead in the polls, couldn't help but chuckle after one of McMillan's comments during the debate.

His 15-minutes of fame even got him a spoof on "Saturday Night Live" last weekend.

Fox's own Sean Hannity had McMillan as a guest on his show to delve deeper into the candidate's platform and reports about why he doesn't pay rent. Just like any political celebrity there's bound to be controversy. There are some reports that McMillan hasn't paid rent since the early 1980's,  and has instead traded doing maintenance work in the building for payment.

But to New Yorkers, McMillan has been a hopeful candidate on the ballot in the past. The karate master has even tried to run for New York City mayor in 2009, 2005 and 1993.

And with Halloween approaching this weekend, Jimmy McMillan is likely to be one of the most replicated political figures of this midterm election.