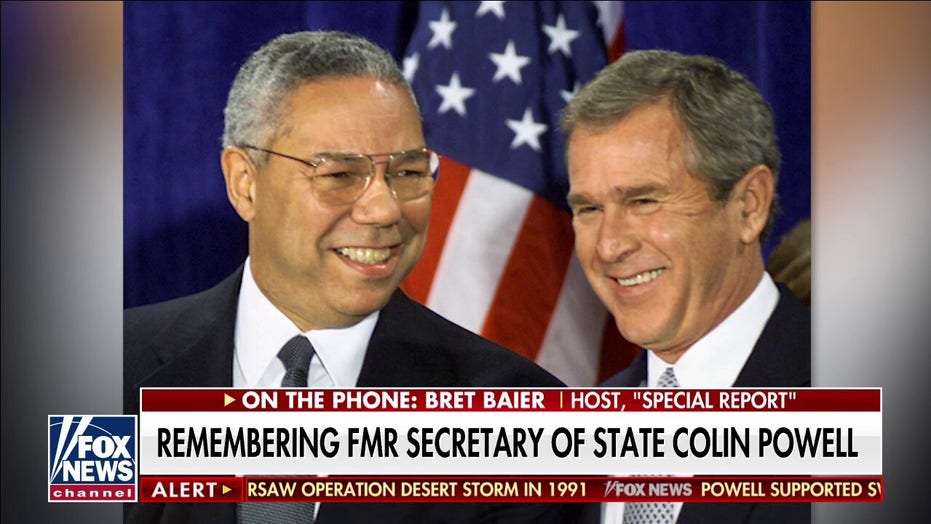 Bret Baier reflects on the life and legacy of Colin Powell

Powell, who served top roles in several administrations including national security adviser, chairman of the Joint Chief of Staff, and secretary of state, died Monday at 84 from complications related to COVID-19, his family announced.

"He was a great public servant, starting with his time as a soldier during Vietnam. Many Presidents relied on General Powell’s counsel and experience. He was National Security Adviser under President Reagan, Chairman of the Joint Chiefs of Staff under my father and President Clinton, and Secretary of State during my Administration," the former president said in a statement on Monday morning.

U.S. President-elect Bush (L) listens as retired General Colin Powell speaks to supporters and the press after Bush annouced Powell would serve as his Secretary of State in the his administration during a ceremony in Crawford, Texas, December 16, 2000. Powell served as Chairman of the Joints Chiefs of Staff under former President Bush's administration. (Reuters)

Bush noted that Powell "was such a favorite of Presidents that he earned the Presidential Medal of Freedom – twice. He was highly respected at home and abroad.  And most important, Colin was a family man and a friend."

SLIDESHOW: COLIN POWELL THROUGH THE YEARS

The former president added that he and former first lady Laura Bush "send Alma and their children our sincere condolences as they remember the life of a great man."

Obama, the nation's only Black president, noted that "Powell helped a generation of young people set their sights higher. He never denied the role that race played in his own life and in our society more broadly. But he also refused to accept that race would limit his dreams, and through his steady and principled leadership, helped pave the way for so many who would follow."

Former President Bill Clinton and former Secretary of State Hillary Clinton called Powell "a courageous soldier, a skilled commander, a dedicated diplomat, and a good and decent man. The son of immigrants, he rose to the top levels of military, civilian, and non-governmental service through intelligence, character, and the ability to see the big picture and attend to the smallest details."

"He lived the promise of America, and spent a lifetime working to help our country, especially our young people, live up to its own ideals and noblest aspirations at home and around the world," the Clintons said.

Defense Secretary Lloyd Austin said that "the world lost one of the greatest leaders that we have ever witnessed…A man who was respected around the globe."

Austin, a retired four-star general who earlier this year became the first Black Defense Secretary in the nation's history, said "I lost a tremendous personal friend and mentor. He has been my mentor for a number of years. He always made time for me and I could always go to him with tough issues. He always had great counsel…. I feel as if I have a hole in my heart." 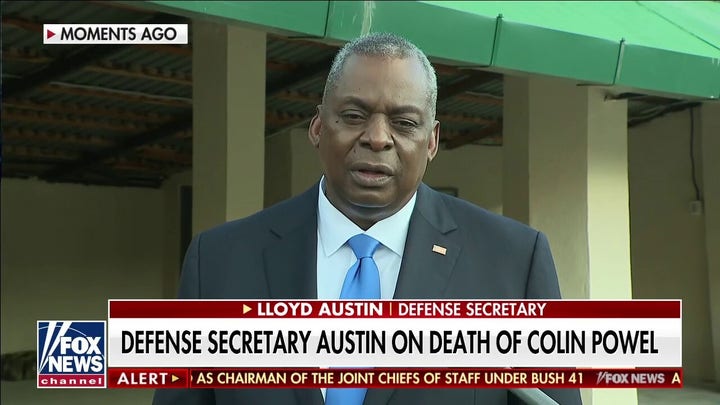 Former Vice President Dick Cheney said that Powell "had a remarkably distinguished career, and I was fortunate to work with him. He was a man who loved his country and served her long and well."

Cheney, who served alongside Powell in the administrations of both Presidents George H.W. Bush and George W. Bush, noted that "working with him during Operations Desert Shield and Desert Storm, I saw first-hand General Powell’s dedication to the United States and his commitment to the brave and selfless men and women who serve our country in uniform. Colin was a trailblazer and role model for so many: the son of immigrants who rose to become National Security Advisor, Chairman of the Joint Chiefs, and Secretary of State."

Former Secretary of State Condoleezza Rice, who worked alongside Powell in the Bush administration as national security adviser and succeeded Powell as America's top diplomat, said remembered him as a "trusted colleague and a dear friend through some very challenging times."

"His devotion to our nation was not limited to the many great things he did while in uniform or during his time spent in Washington. Colin and his wife, Alma, were especially dedicated to and proud of the Colin Powell School for Civic and Global Leadership at the City College of New York—a place very near and dear to his heart," Rice said. "Much of his legacy will live on in the countless number of young lives he touched."

Longtime Senate Republican leader Sen. Mitch McConnell said that "today we remember and honor a man who truly dedicated his entire life to serving his country."

"It is hard to imagine a more quintessentially American story," McConnell noted. "A son of Jamaican immigrants who learned Yiddish from his boyhood neighbors in the Bronx becomes a four-star General in the United States Army and serves four presidential administrations, including as National Security Advisor, the youngest-ever Chairman of the Joint Chiefs of Staff, and the first Black Secretary of State."

Ari Fleischer, who served as Bush's first White House press secretary, remembered Powell for having "such an uplifting approach to his job and life. Always laughing, always happy - he had a hard job, but he always carried it out with a can-do, upbeat approach."

"He treated everyone he met with respect and kindness. I will miss him," Fleischer added.