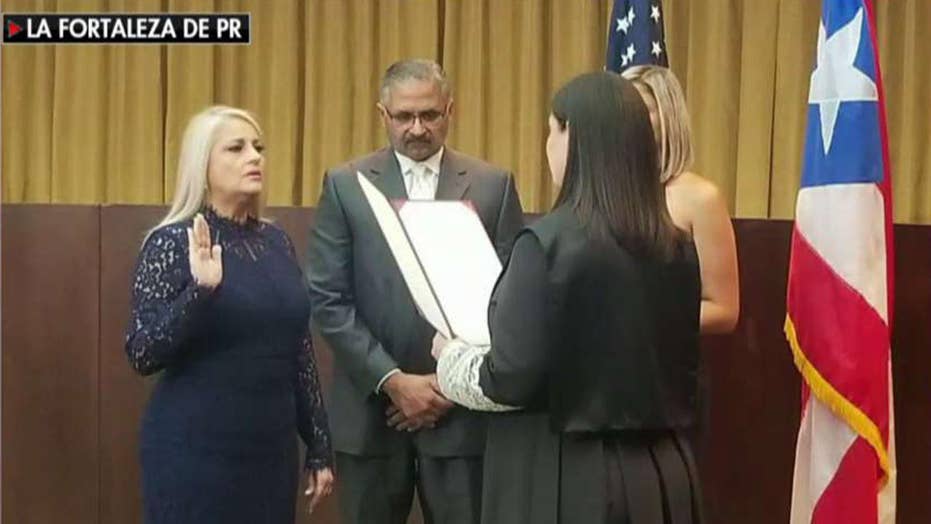 Puerto Rico swears in third governor in a week

Wanda Vazquez is sworn in as governor of Puerto Rico.

Puerto Rico Justice Secretary Wanda Vázquez was sworn in as the island's new governor Wednesday, hours after its Supreme Court ruled that Friday's inauguration of Pedro Pierluisi as governor was against the law and overturned it.

The unpopular Vázquez had said last month she didn't want the job amid weeks of political turmoil that saw thousands of protestors demand the resignation of former Gov. Ricardo Rosselló. She will be the island territory's second female governor.

Her appointment is expected to draw more demonstrations, as the hashtag #WandaRenuncia, or "Wanda resign," was trending on social media even before Rosselló formally vacated his position.

The hashtag is similar to "#RickyRenuncia," which was used by activists to urge Rosselló to step down.

Widespread opposition to Vázquez -- who was appointed in 2017 and is seen as being part of Rosselló's inner circle --partly stems from allegations she failed to pursue corruption probes against members of her pro-statehood New Progressive Party.

Pierluisi was appointed secretary of state by Rosselló while legislators were in recess, and only the House approved his nomination. He was then sworn in as governor Friday after Rosselló formally resigned. In response, Senate President Thomas Rivera Schatz sued to challenge Pierluisi's legitimacy as governor, arguing the Senate's approval was also necessary.

PUERTO RICO POWER VACUUM: AS EMBATTLED GOV. ROSELLO STEPS DOWN, NO ONE KNOWS WHO WILL LEAD THE ISLAND

"It is concluded that the swearing-in as governor by Hon. Pedro R. Pierluisi Urrutia, named secretary of state in recess, is unconstitutional," the court said in a statement.

Rosselló's office said at the time that Pierluisi did not need to be confirmed by both chambers of Puerto Rico's legislature. Pierluisi supporters cited a 2005 law said that in cases where a secretary of state is taking over as governor, they do not have to be approved by both houses of the legislature.

The Senate's lawsuit claimed that the law went against the island's constitution and the Supreme Court agreed.

Pierluisi said before the ruling that he would respect the court's decision, no matter what it would be.

"I wish the Honorable Wanda Vázquez Garced the greatest success as Governor of Puerto Rico. I will always be in the best disposition to advance any initiative that seeks to improve the quality of life of our people and to encourage the Federal Government to fulfill its responsibility to provide the support that Puerto Rico needs for its recovery and reconstruction,"

Rosselló first announced on July 24 that he would resign after two weeks of protests over mismanagement and leaked chats that showed him and his top aides denigrating victims of Hurricane Maria and other Puerto Ricans.

The scandal resulted in the resignation of top Puerto Rican officials, including then-Secretary of State Luis Rivera Marin. According to Puerto Rico's line of succession, the secretary of state is next in line to serve as governor.

When Marin resigned, Vázquez was next.