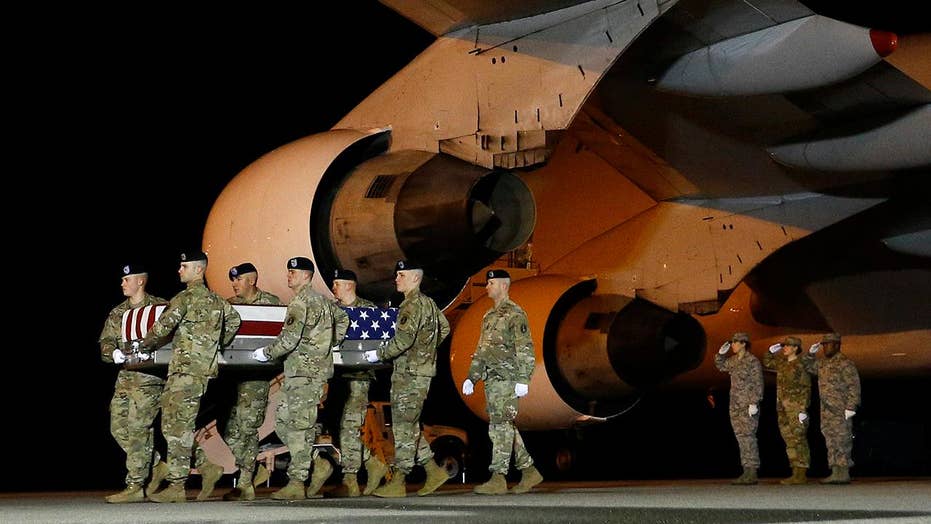 November was a deadly month for US troops in Afghanistan

Of the 12 Americans killed in combat in Afghanistan this year, five have been killed this month; national security correspondent Jennifer Griffin reports from the Pentagon.

Three Northern Virginia men --including one who reportedly celebrated New Year's Eve in 1999 with the Clintons-- were charged last week for their alleged roles in a scheme to defraud the Pentagon after receiving an $8 billion contract in 2012 to provide food and supplies to troops in Afghanistan, the Department of Justice announced.

Federal prosecutors said the three—all executives connected to Anham FZCO, a defense contractor based in the United Arab Emirates--- knowingly gave false estimates of completion dates for a warehouse intended to provide supplies for troops in Afghanistan in order to win contracts. They allegedly provided "misleading photographs" to show that the project was further along than it was.

"Specifically, the indictment alleges that, in February of 2012, the defendants and others caused Anham employees to transport construction equipment and materials to the proposed site of one of the warehouse complexes to create the false appearance of an active construction site," a Department of Justice statement read.

The company won the contract in 2011 to build warehouses at Bagram Air Field, but as the deadline approached, prosecutors said one warehouse was a concrete slab in the ground, and construction did not yet start on the second one, Stars and Stripes reported.

Abdul Huda Farouki, 75, the former Anham CEO; his brother Mazen Farouki, 73; and Salah Maarouf, 71, pleaded not guilty on Thursday to eight counts each of fraud and violating sanctions against Iran, according to an indictment unsealed Thursday. The men were charged in Washington, D.C.

Abdul Huda Farouki and his wife were Washington socialites and donated to the Clinton family charity, The Wall Street Journal reported. The Washington Post reported that the former CEO celebrated New Year's Eve with the Clintons in 1999 and was invited to a state dinner. The report pointed to a Bloomberg article that cited a government audit that found that Anham overbilled the Pentagon $4.4 million.

The Journal first reported on the company allegedly moving equipment in a military contract through Iran, a possible violation of sanctions. The government said that the former CEO fired off an email to a senior defense official that "falsely claimed" senior management at the company were unaware of the transshipments.

The company has denied all charges. Anham reportedly said it helped the U.S. save $1.4 billion by reducing prices. The company echoed the not guilty pleas and said it is confident the defendants would be exonerated.

"ANHAM continues to cooperate with the Justice Department. Nevertheless, the company continues to believe that the purported violations are without legal merit," the company said in a statement on its website, the paper reported.

Their next hearing is Dec. 6.