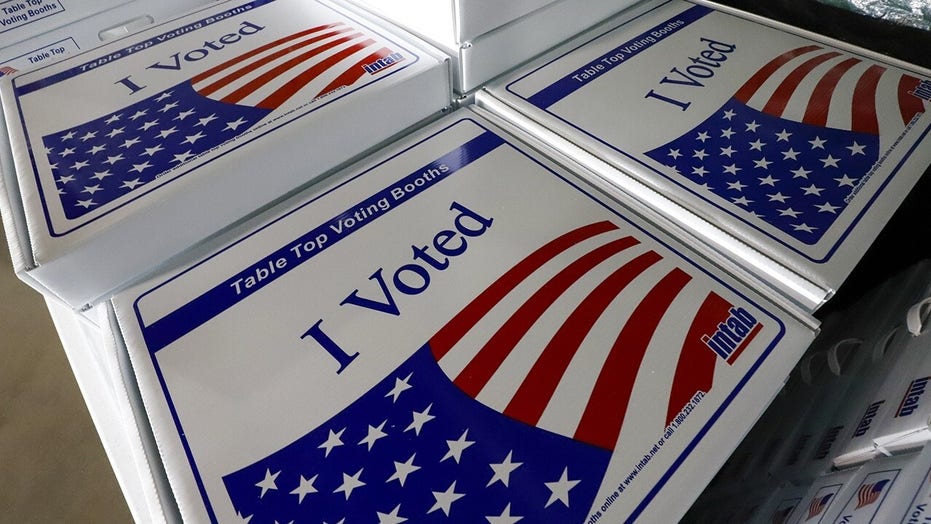 D.C. says voters will be exempt from the city curfew as Republican Rep. Steve King faces a challenge in Iowa; Peter Doocy lays out the races to watch.

Amid the coronavirus pandemic and with some cities nationwide under curfews in the wake of protests following the death of George Floyd, eight states and the District of Columbia are holding primaries on Tuesday.

They’re being joined by four states -- Indiana, Maryland, Pennsylvania and Rhode Island -- that postponed their primaries earlier this year after the coronavirus pandemic shut down much of the nation. Nearly all states holding primaries scheduled for late March, April and May -- worried about health concerns over in-person voting -- delayed their contests or transformed them into nearly entirely balloting by mail.

Iowa, which kicks off the presidential nominating calendar with its caucuses, is also holding a primary for down-ballot races.

Even though President Trump has repeatedly railed against moves by states to expand voting by mail amid the pandemic, many of them are doing just that. Pennsylvania, Indiana and Maryland have increased the use of mail-in ballots to avoid any overflows of people gathering in close quarters at polling stations during Tuesday’s contests. And Montana’s secretary of state worked with each of the state’s counties to provide for an election nearly entirely by mail.

In Pennsylvania, Gov. Tom Wolf on Monday extended by a week the deadline for voters in six counties for absentee or mail-in ballots.

The June 2 primaries may be a preview or an appetizer of November’s general election -- since they’re the first widespread test of whether the U.S. Postal Service and local election officials can accurately and quickly count the surge in mailed-in ballots. And they’re also a test of whether voting in multiple states -- including many urban areas -- will be disrupted by coronavirus health concerns.

But the mechanics of voting isn’t the only thing in the spotlight as Americans from across the country cast ballots. Here are some other things to watch:

Will Biden go over the top?

But Biden’s yet to win the 1,991 delegates needed to officially clinch the nomination.

Biden's pledged-delegate count stands at 1,566, according to the Fox News delegate tracker. That leaves him 425 short of the threshold, with 479 delegates up for grabs in Tuesday's primaries.

While Biden is the last Democrat candidate standing, it’s no sure thing that he’ll lock up the nomination on Tuesday. Sanders has kept his name on the ballots as he continues to capture delegates in order to have influence in the voting by delegates on the party’s platform at the summer nominating convention. If Sanders hits 15 percent in some of the contests, it would keep Biden from going over the top -- at least until the next round of primaries.

Besides the presidential primary race, there are some compelling down-ballot showdowns that may capture national attention.

King fights for his political life

Rep. Steve King -- who was first elected to Congress in 2002 -- is running for a 10th two-year term representing the state’s 4th Congressional District, in the conservative northwest corner of Iowa.

King -- who’s long been criticized by Democrats over his controversial racial remarks -- is now in deep trouble within the GOP over his comments.

He’s facing multiple primary challengers. State Sen. Randy Feenstra is the leading contender to oust the incumbent, who narrowly won reelection in 2018 over Democrat J.D. Scholten, who is running unopposed in his party’s primary.

Feenstra’s campaign is spotlighting the stripping last year of King’s committee assignments after the congressman questioned in a New York Times interview how terms like “white nationalist” and "white supremacist” became offensive terms.

Last month, King said that House Republican Leader Kevin McCarthy, R-Calif., had promised to push for King to regain his committee assignments and his seniority -- which is crucial on Capitol Hill -- but McCarthy publicly denied King’s claim.

In the Democratic Senate primary, national groups are backing businesswoman Therese Greenfield in a contested race, hoping that as a general election candidate, she’ll topple Republican incumbent Sen. Joni Ernst in what could possibly turn into a pivotal general election race.

But all eyes are on his November showdown with Republican incumbent Sen. Steve Daines, a former congressman who’s running for a second six-year term in the Senate. The race could be one of the handful of contests that decides whether the Republicans keep their majority in the chamber or if the Democrats win back control.

Both parties have competitive congressional primaries.

Plame, a former CIA agent who grabbed national attention when her cover was blown during President George W. Bush’s administration, has raised plenty of campaign cash but faces charges she’s a carpetbagger. Fernandez, who is being backed by the Congressional Hispanic Caucus, is touting her New Mexico roots.

In the 1st Congressional District, which the GOP controlled for 36 of the last 38 years until Democrats captured the seat in 2018, former state Rep. Yvette Herrell and former congressional aide Claire Chase are facing off in the primary, with the winner challenging Democratic Rep. Xochitl Torres Small in November.