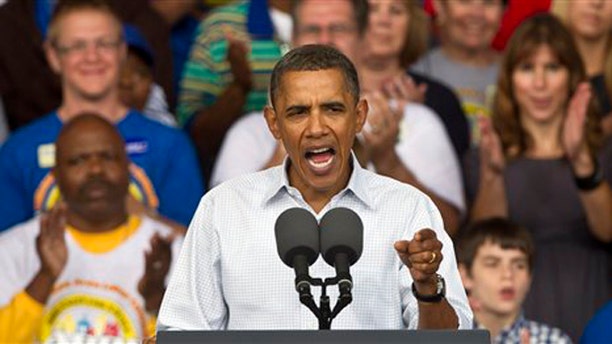 One day, they're in medical jackets. Another, they're in construction helmets. Then, they're sporting college gear head-to-toe.

It's no accident. The crowd behind President Obama, or any president, is a carefully groomed chorus of supporters chosen to complement and amplify the president's message of the day.

They were on full display Wednesday in Cleveland, applauding, laughing, smiling and bobbing their heads along with every nuance of Obama's economic speech. An equally enthusiastic bunch cheered on the president Monday in Milwaukee for his Labor Day speech.

The select guests lucky enough to sit directly behind the president get the honor of being in arm's reach of the commander-in-chief on national TV; in turn, the president can imply, by virtue of their presence and enthusiasm, the American people are on his side.

These visuals are all the more important as the president tries to sell a new set of job-creation proposals with fewer than two months to go on the election calendar.

The White House did not respond to requests for comment about how it assembles its backdrops.

Brad Blakeman, who worked as a member of President George W. Bush's senior staff, said it all comes down to image.

Blakeman said the White House communications team works closely with the advance team before any event to assemble that image. They typically work through whatever organization is hosting the rally or speech to invite guests known to be sympathetic to the cause. For those closest to the president, Blakeman said, the Secret Service will have to screen them. Some guests will get a VIP ticket but not find out how close they'll be until the day of.

The Cleveland speech was open to invited guests only, including students and faculty at Cuyahoga Community College, as well as local residents and elected officials. According to one local report, students were recruited at the last minute to fill empty seats in the gym. The Milwaukee speech crowd was filled up mostly by union members and their families who got tickets in advance.

Organizers try to leave little to chance at these addresses, but the best laid plans go awry.

Take, for instance, the boy who became an Internet sensation in 2004 after he was captured on camera yawning, fidgeting and goofing around behind Bush during a Florida speech.

"Nobody knew who the kid was," Blakeman said. "Kids are like pets. ... Kids tend to be as unpredictable as animals can be."

History repeated itself with Obama. While he delivered a commencement address in June at Michigan's Kalamazoo Central High School, one student could be seen nodding off in the background.

On the flip side, aides can be too cautious in trying to set up the perfect shot. Obama's campaign team got in a spot of trouble when it restricted two Muslim women in headscarves from sitting behind the president at a Detroit rally in 2008.

Obama's had better luck with some of his more recent economic speeches.

During his Labor Day address, the crowd behind him was riding the same wavelength. Whether Obama was talking about strengthening job security, ending the combat mission in Iraq or cracking down on credit card company abuses, one supporter directly behind him kept up a steady head bob, waxing and waning perfectly in time with the intensity of the speech.

College students offered another enthusiastic backdrop during the president's speech Aug. 9 at the University of Texas on the link between the economic progress and higher education.