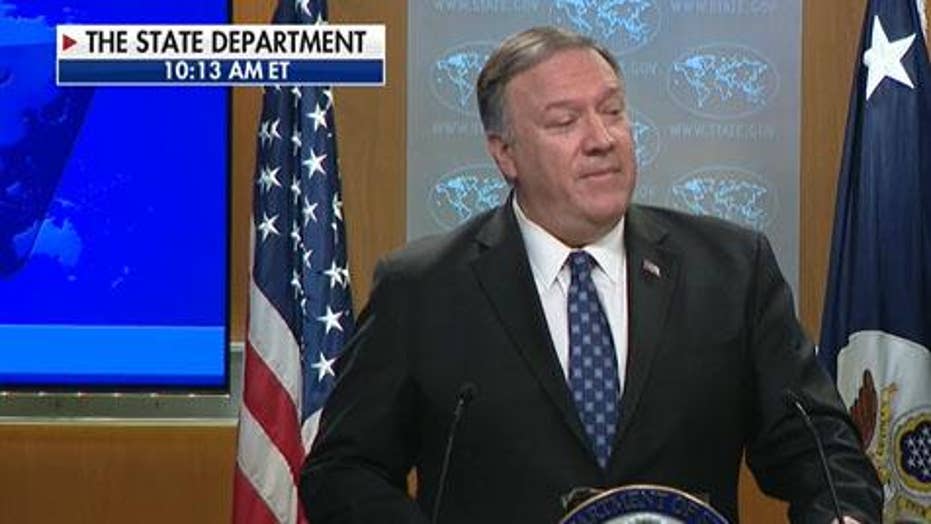 Secretary of State Mike Pompeo scoffed Tuesday at a suggestion that Iranian Gen. Qassem Soleimani was on a diplomatic mission to Baghdad when a U.S. drone strike killed him, insisting that the story is "fundamentally false" and "propaganda."

"Anybody here believe that?" Pompeo asked reporters when the claim was brought up during a Tuesday press briefing. "We know that wasn't true."

The notion that Soleimani was on some sort of peace mission was first floated by Iraqi Prime Minister Adil Abdul-Mahdi, who reportedly said at a Sunday session he was scheduled to meet with Soleimani and discuss a message from Saudi Arabia regarding possible agreements in the region.

Pompeo addressed the claim that Soleimani was supposed to work on a peace agreement with Saudi Arabia, stating that he spoke to Saudi officials about this.

"I can assure you that they will share my view that he was not there representing some kind of agreement that was going to reduce risk or reduce the risk to the lives of Americans while he was on that trip."

He also addressed claims from Iranian Foreign Minister Javad Zarif, who said the U.S. denied him a visa to speak at United Nations headquarters later this week and blasted the U.S. strike as an act of "terrorism."

Pompeo dismissed Zarif as "a propagandist of the first order," while insisting the claim of a diplomatic mission has no merit.

"It's not new, we've heard these same lies before. It's fundamentally false," he said.

When asked about concerns of potential international law violations after President Trump claimed that Iranian cultural sites were possible targets should Iran retaliate after Soleimani's death, Pompeo insisted that any U.S. action will be proper.

"Every target that's being reviewed, every effort that's being made will always be conducted inside the international laws," he said.

The secretary refused to get into details regarding the decision to deny a visa to Zarif, stating, "We don't comment on visa matters."

Zarif, on CNN, described the airstrike as "state terrorism" and vowed that Iran would respond "proportionally."

As for Trump's threat to target cultural sites, the Iranian top diplomat said the U.S. president is "prepared to commit war crimes."

Despite Trump's comments, Defense Secretary Mark Esper indicated to CNN Monday that cultural sites are not on the table. He said the U.S. would "follow the laws of armed conflict" and strongly suggested that cultural sites could not be targeted under those laws.