Here are eight takeaways on the coronavirus pandemic from a Fox News Poll released Thursday.

-- Equal numbers of voters, 9 in 10, are concerned about the spread of coronavirus in the U.S. and that the virus will cause a recession.

-- More than 4 in 10 say someone in their household lost their job or work hours because of the virus.

-- The number of Republicans feeling “nervous” about the economy is up 26 points.

-- Voters split over whether Trump’s response to the outbreak is appropriate, while one quarter feel most Americans are “overreacting.”

-- When asked about Uncle Sam’s ability to check Mother Nature, more blame the government for the virus spreading the way it has than say it was unstoppable.

-- Most voters say their daily life has changed because of coronavirus, and large numbers are praying for health, avoiding public places, and washing their hands.

-- More Democrats than Republicans are concerned about the virus spreading nationally and about personally catching it.

Approval of Trump’s overall job performance is up one point since February to 48 percent, while 51 percent disapprove. That puts him underwater by 3 points. Last month, his rating was 47 approve-52 disapprove (-5).  His best marks were in February 2017, when he had a net positive rating by one point (48-47). 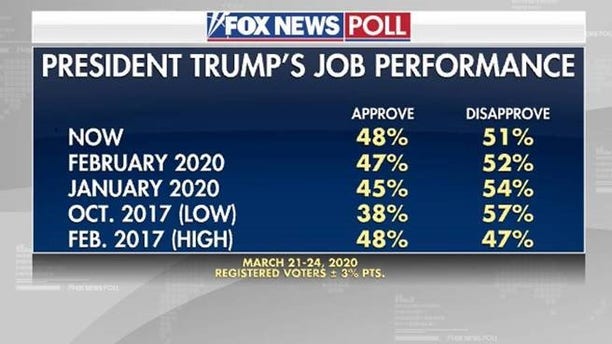 The uptick comes from a record 16 percent of Democrats approving of Trump, up from a previous high of 14 percent. And approval among women matches an earlier record 43 percent.

When asked specifically about responses to the coronavirus outbreak, 51 percent of voters approve of Trump and 46 percent disapprove.  The federal government overall (55-41) and Vice President Mike Pence (55-37) receive similar ratings.

A much larger number, 77 percent, approve of the job Dr. Anthony Fauci is doing (12 percent disapprove).  There is rare partisan agreement on Fauci, as most Democrats (74 percent) and Republicans (85 percent) approve, while ratings on Trump, Pence, and the federal government are highly partisan. 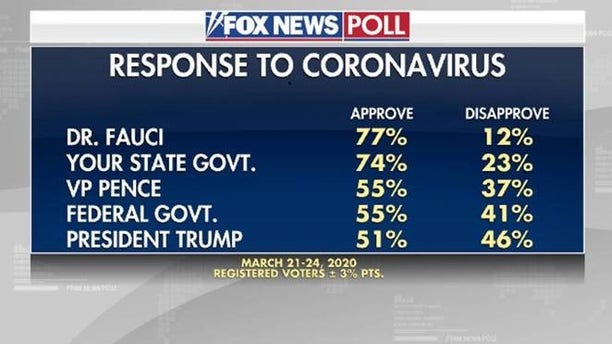 Fully 89 percent are very or somewhat concerned the pandemic will cause a recession and 77 percent fear it will cause financial hardship for their family.  Nearly as many worry about their ability to access needed health care services (74 percent) and get tested for the virus (70 percent). 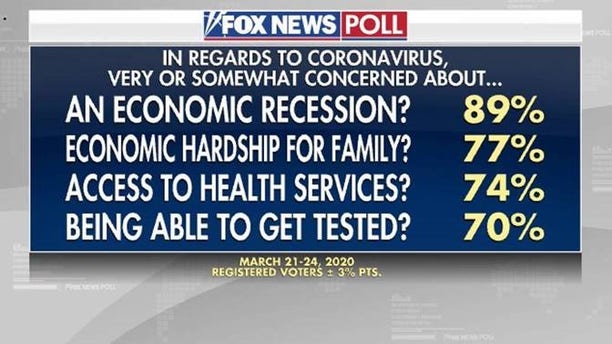 One in eight (12 percent) say they know someone who has the virus, while seven in ten (69 percent) are worried they will catch it.  Ninety-two percent are concerned about it spreading in the U.S., up from 70 percent last month.  For comparison, concern about Ebola virus spreading peaked at 68 percent (2014) and 65 percent for swine flu (2009).

Overall, voters have mixed views on whether Trump is reacting appropriately to the outbreak (45 percent) or not taking it seriously enough (46 percent).  Few feel he is overreacting (7 percent).

Here’s a hint at whether voters will blame Washington.  By a 53-34 percent margin, more believe a quicker response from the federal government could have slowed the spread of coronavirus in the U.S. than say it is so contagious that nothing could have prevented it spreading the way it has.  Some 30 percent of Republicans join 73 percent of Democrats in saying the government could have made a difference had it acted faster. 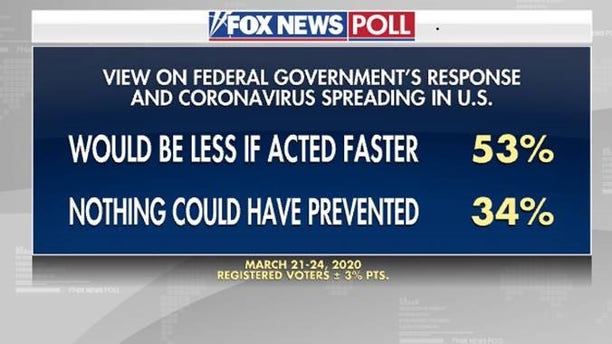 Voters are feeling economic jitters.  Forty-three percent say someone in their household lost their job or had work hours cut because of the virus.  The number rating the economy positively is down 22 points since January, those expecting the economy to get worse next year is up 15 points, and the number saying they are “nervous” about the economy is nearing the record high. 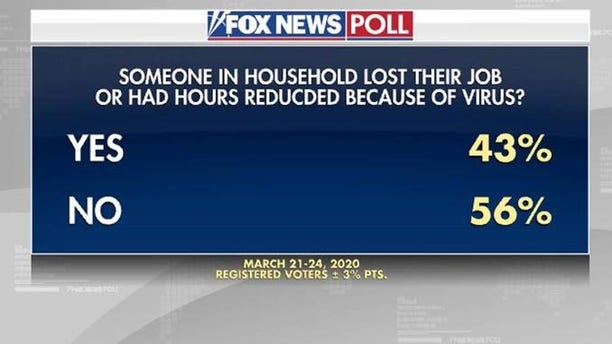 Economic nervousness hit a high of 70 percent in 2010.  Today, 62 percent are nervous, up from 48 percent in September 2019 (the most recent comparison).  The shift comes mostly from a 26-point increase among Republicans, as 45 percent feel uneasy compared to 19 percent six months ago. Among Democrats, “nervous” increased by 7 points (77 up from 70 percent). 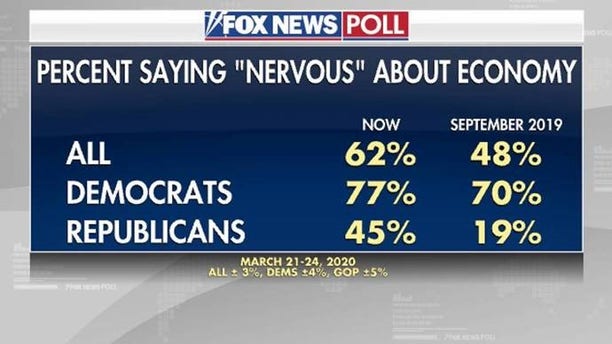 In addition, since January, the portion of Republicans saying the economy is in excellent or good shape dropped 34 points (85 vs. 51 percent) compared to a 12-point decline among Democrats (31 vs. 19 percent). 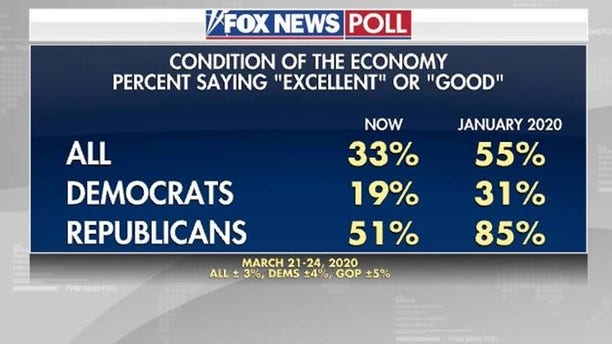 Overall, 33 percent of voters rate the economy positively, down from 55 percent in January.  A plurality of 40 percent thinks the economy will get worse next year, up from 25 percent a year ago (April 2019).

Some 85 percent have changed the way they lead their everyday life because of the virus, including 50 percent who say “a great deal” of change.

For nearly 200 million Americans, one of the biggest changes is staying home as much as possible.  More than 20 states have shelter-in-place-type orders, and 75 percent of voters favor a national “stay-in-place” order for everyone except essential workers.

Majorities report that in the last week they are washing their hands more often (88 percent), avoiding public places (82 percent), praying for health and healing (70 percent), stocking up on food/supplies (61 percent), and changing travel plans (59 percent).

Some might consider those actions over the top.  Twenty-four percent of voters say Americans are overreacting to the outbreak, while the rest split between thinking Americans are reacting appropriately (36 percent) and not taking it seriously enough (37 percent).

By a 14-point margin, Republicans are more likely than Democrats to think Americans are overreacting, and Republicans are less likely to have changed their life “a great deal” (-13), be worried about getting infected (-14), and be concerned about the virus spreading nationally (-7).

As lawmakers vote on an emergency major stimulus bill, more than 8 in 10 voters favor writing checks for middle- and lower-income Americans and giving cash to small businesses, but support drops to about 3 in 10 for giveaways to major corporations. 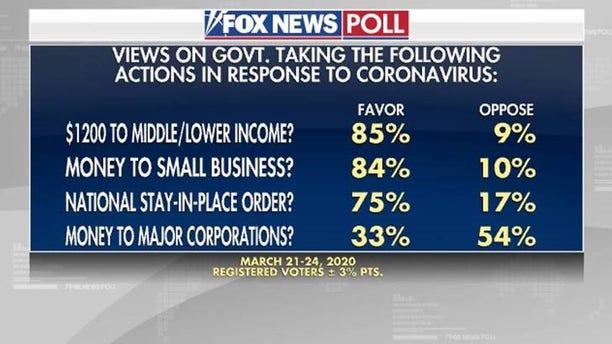 Approval of Congress stands at 31 percent. That’s up from 26 percent last month and the highest it has been since February 2011.

Conducted March 21-24, 2020 under the joint direction of Beacon Research (D) and Shaw & Company (R), this Fox News Poll includes interviews with 1,011 randomly chosen registered voters nationwide who spoke with live interviewers on both landlines and cellphones.  The poll has a margin of sampling error of plus or minus three percentage points for all registered voters.