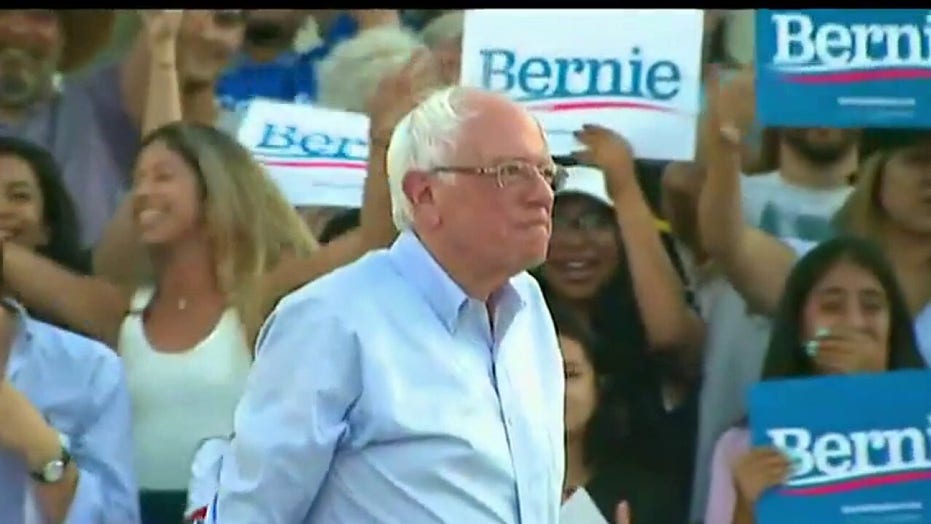 Sen. Bernie Sanders, I-Vt., suspended his campaign for the Democratic presidential nomination Wednesday in a decision that cleared the way for former Vice President Joe Biden to lace up the party's nomination and face off with President Trump in November.

While the news was not unexpected due to Biden's significant lead in delegates and strong support in both the polls and from other influential Democrats, it drew a wide range of reactions from voices throughout the political world.

Here's how those in politics are reacting to Sanders' decision to drop out of the presidential race.

Biden issued a lengthy statement on his relationship with Sanders, touting his former rival's efforts to change "the dialogue in America."

"Bernie has done something rare in politics. He hasn’t just run a political campaign; he’s created a movement," Biden said. "Issues which had been given little attention — or little hope of ever passing — are now at the center of the political debate. Income inequality, universal health care, climate change, free college, relieving students from the crushing debt of student loans. These are just a few of the issues Bernie and his supporters have given life to."

Biden continued: "And while Bernie and I may not agree on how we might get there, we agree on the ultimate goal for these issues and many more."

Sanders' former rivals for the Democratic presidential nomination sent the senator well-wishes and thanked him for his contributions to the debate within the party.

Sen. Elizabeth Warren, D-Mass., who many blamed for Sanders' downfall after she stayed in the presidential race through Super Tuesday, allegedly siphoning votes from Sanders, complimented the self-declared democratic socialist's "fight for progressive ideas."

Sen. Amy Klobuchar, D-Minn., reminisced on how she and Sanders "came into the Senate together."

Former Secretary of Housing and Urban Development Julian Castro called Sanders a "tireless advocate for those who need it most."

Tech entrepreneur Andrew Yang was straight to the point.

"Bernie Sanders is a f---ing hero. Let’s come together and beat this guy," he said.

After Sanders' announcement Wednesday morning, those connected with the Republican Party re-upped their messaging that there isn't really much distance between Sanders and Biden on actual policy -- just the way that they present themselves.

"Joe Biden and Bernie Sanders are two sides of the same radical socialist coin," said Steve Guest, the rapid response director for the RNC. "While Bernie may not be the one pushing the Democrat Party further to the left as the presumptive nominee, Biden is more than happy to lead that socialist charge."

Others took to gloating over Sanders' misfortune.

Others questioned why Sanders didn't drop out before the Wisconsin primary election that took place in the middle of a pandemic on Tuesday -- although there was a general election for a state Supreme Court seat in Wisconsin on Tuesday as well.

Shaun King, one of Sanders' most loyal backers, warned Biden "and his campaign, staff, and supporters" that "[v]otes are EARNED," in what was apparently a shot across moderate Democrats' bow that they should not forget about the party's left-wing base.

Linda Sarsour, a Sanders surrogate who has gotten into trouble for allegations of antisemitism in the past, said that Sanders supporters are working toward a "more equitable world" and will not give up their fight.

Nina Turner, the national co-chair of the Sanders campaign, thanked the "#Bernie2020 Campaign Family" and said "It continues [to be] my great honor to be a leader in our movement."

Rep. Ilhan Omar, D-Minn., who endorsed Sanders, tweeted a long thread, saying that "our movement faces a setback." She went on, without naming Biden, to encourage Sanders supporters to vote for the former vice president.

"For those of you who plan to sit this election out or vote for Trump, just stop. The livelihoods of millions of marginalized people are at stake," she said. "We must all fight like hell to get Donald Trump out of the White House and end the rise of fascism in this country."

Trump fired off three tweets on Wednesday in the immediate aftermath of news breaking about Sanders leaving the presidential race.

In his first tweet, he blamed Elizabeth Warren and the DNC for Sanders' downfall, comparing the 2020 primary to the 2016 primary that Trump has often said was "rigged" against Sanders.

Next, Trump expressed confusion about Sanders' desire to accrue more pledged delegates in the later presidential primary races -- a strategy Sanders will likely use to maximize his influence at the Democratic National Convention later this year, particularly over the drafting of the party's platform.

Omar immediately tweeted that she would support Biden. The other three representatives Trump referenced, who are members of what is more commonly known as "The Squad," have never given any indication they would not support the eventual Democratic presidential nominee.