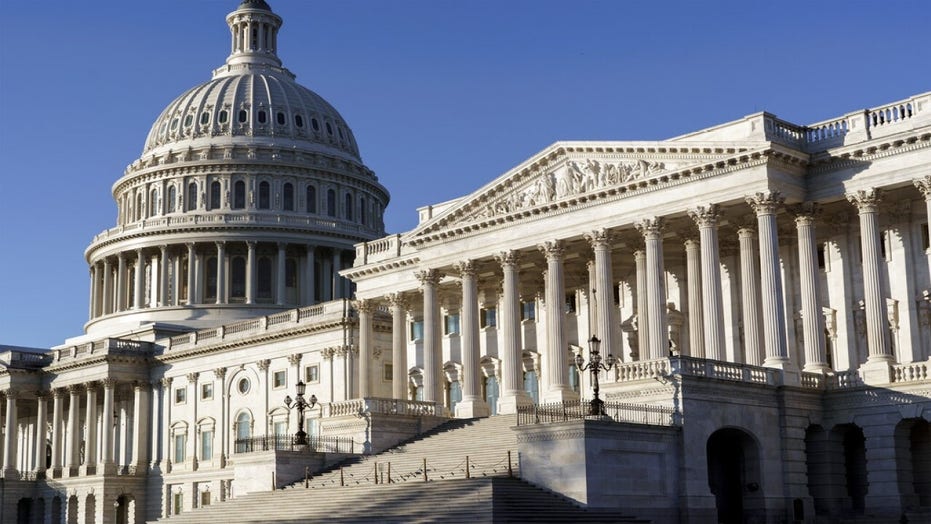 Balance of power in Senate rests on Georgia's runoff elections

EXCLUSIVE: Republican Sen. David Perdue of Georgia is spotlighting a well-publicized comment made by Senate Minority Leader Chuck Schumer in the first TV of his runoff campaign against his Democratic challenger, Jon Ossoff.

The runoff elections for both of Georgia’s Republican-held Senate seats will take place on Jan. 5, and they will determine whether the GOP holds on to its majority in the chamber, or if the Democrats will control both houses of Congress in addition to the White House.

The spot, which the Perdue campaign said will start running Friday statewide on broadcast, cable and satellite TV, features comments Schumer made a week ago, when he said, “Now, we take Georgia. Then, we change America."

“You heard him. Chuck Schumer is trying to use Georgia to take the Senate majority and radically change America,” the narrator in the ad charges. “The Schumer, Pelosi, Ossoff change? Defund police. Voting rights for illegal immigrants. Washington, D.C. as the 51st state.”

The commercial then includes a clip of Ossoff saying that “change is coming to America” before warning, “Believe them. Vote Perdue to stop them.”

Campaign manager Ben Fry told Fox News that “the only way to save America is to save the Republican majority in the Senate by reelecting David Perdue.”

The spot by the Perdue campaign is the latest to spotlight Schumer’s comments. The National Republican Senatorial Committee (NRSC), which is the reelection arm of the Senate GOP, went up with a web video last weekend immediately after the Schumer clip went viral.

And a commercial that started running on TV this week in Georgia – that stars incoming NRSC chair Sen. Rick Scott of Florida – also showcases the Schumer clip. Scott will campaign in Georgia on Friday with both Perdue and appointed Sen. Kelly Loeffler, the Republican candidate in the state’s other Senate runoff election.

Democrats, meanwhile, are taking aim at Perdue and Loeffler over their strong support of President Trump.

“The Georgia Republican ticket is made up of a pair of corrupt, out-of-touch politicians who profited off of the pandemic and will stop at nothing to take away Georgians’ health care. It’s clear that David Perdue and Kelly Loeffler aren’t ready for primetime and we’re focused on exposing their records in the months to come,” said J.B. Poersch, president of Senate Majority PAC, the top outside group backing Senate Democratic incumbents and candidates.

Ossoff - in his first runoff add - doesn't mention Perdue by name and doesn't overtly criticize Republicans. But in the commercial – which went up on the airwaves last week – the Democratic nominee indirectly repeats his main argument that Perdue’s botched the response to the coronavirus pandemic.

"The path to recovery is clear. First, we listen to medical experts to control this virus. Then we shore up our economy with stronger support for small business and tax relief for working families," Ossoff says to camera in the spot. "And it's time for a historic infrastructure plan to get people back to work and invest in our future. We need leaders who bring us together to get this done."

The GOP – which held a 53-47 majority heading into the 2020 elections – faced a challenging electoral map. But the Democrats' hopes of capturing a solid Senate majority in last week’s elections were dashed as Republicans overperformed.

The current balance of power coming out of the elections is 50 Republicans and 48 Democrats. That means the Democrats must win both of Georgia’s runoff elections to make it a 50-50 Senate, in which Vice President-elect Kamala Harris would be the tie-breaking vote, giving her party a razor-thin majority in the chamber.

In Georgia, where state law dictates a runoff if no candidate reaches 50% of the vote, Perdue narrowly missed out on avoiding a runoff. He currently stands at 49.75% in the count, with nearly all votes counted. Ossoff, trails by roughly 87,000 votes.

In the other race, Loeffler – who captured nearly 26% of the vote in a whopping 20-candidate special election to fill the final two years of the term of former GOP Sen. Johnny Isakson – is facing off against Democrat Raphael Warnock, who won nearly 33% of the vote.

Both parties and outside groups are pouring massive amounts of money and resources into the twin runoff elections.