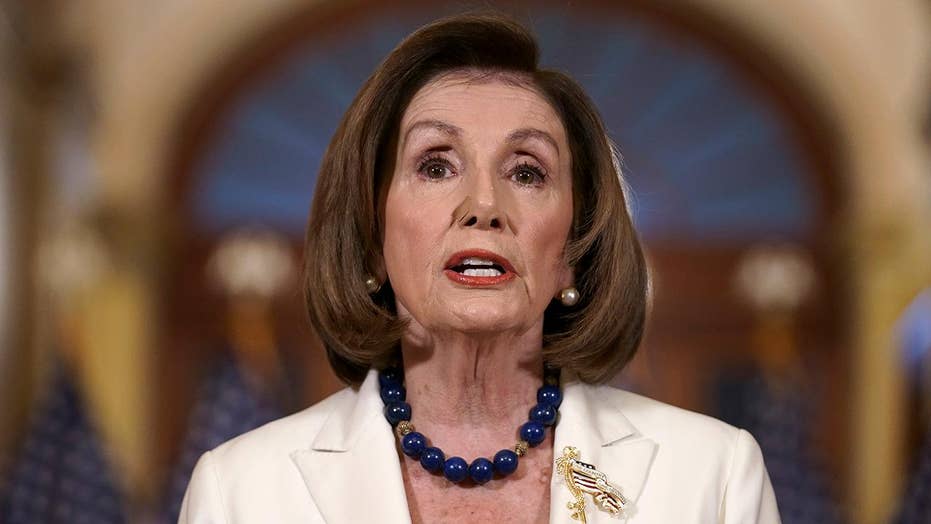 House Speaker Nancy Pelosi says President Trump's actions have 'seriously violated the Constitution,' leaving her no choice but to act before he tries to 'corrupt the election once again for his own benefit.'

House Speaker Nancy Pelosi announced Thursday that Democrats will proceed with articles of impeachment against President Trump, declaring that the president's conduct "leaves us no choice but to act."

The announcement comes after a heated House Judiciary Committee hearing Wednesday featuring four law professors -- most of them Democrat-invited witnesses who presented arguments for impeachment. Pelosi claimed the facts are now "uncontested" that Trump "abused his power for his own personal political benefit at the expense of our national security" by allegedly using aid as leverage to seek an investigation of the Bidens from Ukraine.

"Today, I am asking our chairman to proceed with articles of impeachment," Pelosi stated during her brief address, referring to House Judiciary Committee Chairman Jerry Nadler, D-N.Y.

The White House swiftly hit back, with Press Secretary Stephanie Grisham tweeting the Democrats "should be ashamed."

Trump "has done nothing but lead our country - resulting in a booming economy, more jobs & a stronger military, to name just a few of his major accomplishments. We look forward to a fair trial in the Senate," she tweeted.

Trump himself accused Pelosi's party of trying to impeach him over “NOTHING” and warned that it could set a dangerous precedent.

“This will mean that the beyond important and seldom used act of Impeachment will be used routinely to attack future Presidents. That is not what our Founders had in mind,” he tweeted.

Senate Majority Leader Mitch McConnell also railed against Pelosi on the floor, saying “all impeachment all the time” is preventing other work from getting done.

At Wednesday's hearing, the three professors called upon by the Democratic majority expressed an urgency to impeach the president.

"If we cannot impeach a president who abuses his office for personal advantage, we no longer live in a democracy—we live in a monarchy, or we live under a dictatorship," Harvard Law professor Noah Feldman said.

Reflecting on the testimony, Pelosi said the professors "illuminated without a doubt that the president’s actions are a profound violation of the public trust.”

But the GOP’s witness, Jonathan Turley of George Washington University, warned Democrats not to rush into impeachment, explaining that a stronger foundation was needed to take such a drastic step.

Turley even accused lawmakers of doing “precisely” what they’re condemning Trump for doing. “It’s your abuse of power,” he warned the House should they move to impeach.

Turley conceded that it was possible Trump had set up an illicit and impeachable quid pro quo -- but he asserted there was simply no evidence in the record to prove the claim.

Rep. Matt Gaetz, R-Fla., cited another reason why Democrats should not move forward with impeachment right now -- the House’s failure to pass vital bills amid the impeachment fight.

“Franky, we’d love to govern with you,” he said to Democratic colleagues on Wednesday. “We’d love to pass USMCA, we’d love to put out a helping hand to our seniors and lower prescription drug prices. It’s the will of the people you ignore when you continue down this terrible road of impeachment.”