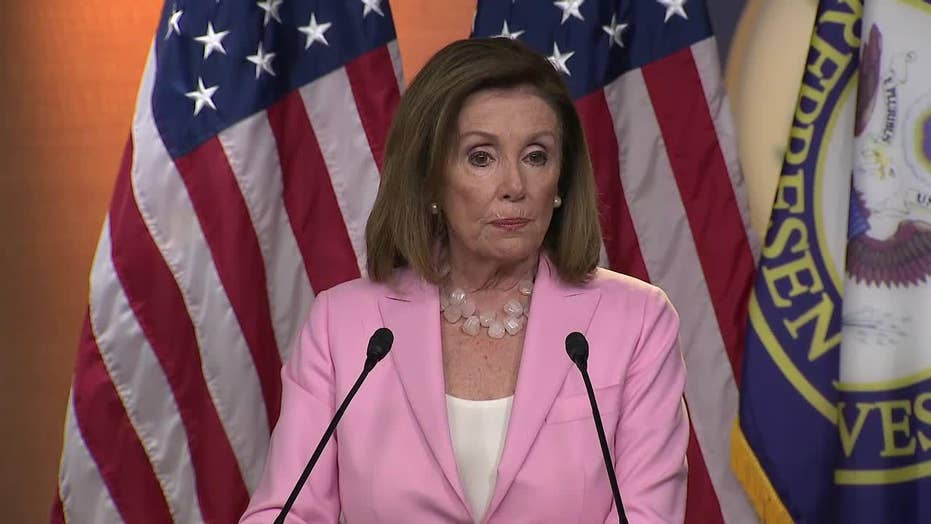 House Speaker Nancy Pelosi, D-Calif., lashed out at reporters on Thursday when they repeatedly asked her about her current stance on impeaching the president, while party tensions over the process mount.

“That’s the only question, that’s all I’m going to say about this subject, and there's nothing different from one day to the next,” she added.

When reporters continued to press the issue, Pelosi cut them off, saying curtly, “I’m not answering any more questions on this subject.”

She did, however, note that people she speaks to outside Washington are telling her to be careful on the question of impeachment.

Before leaving the room, she scolded the media for not focusing more on Senate inaction on gun control.

“Why is it you are hung up on a word over here when lives are at stake over there?” she asked.

Pelosi was speaking moments after Democrats on the House Judiciary Committee voted to define the rules for future committee impeachment hearings, amid widespread confusion. In the run-up, Democratic leadership has given muddled statements on the status of the impeachment effort.

Chairman Jerry Nadler, D-N.Y., sought Thursday to clear the air on what his committee is actually doing. He said the panel is “engaged in an investigation as to whether to launch an impeachment investigation into President Trump."

Nadler previously said House Democrats are pursuing an impeachment inquiry, a remark subsequently contradicted by Majority Leader Steny Hoyer, D-Md. Hoyer later released a statement saying that he had misunderstood the question, and that he supports Nadler.

Pelosi, who has been a more skeptical voice regarding possible impeachment, also said Thursday that if Trump has any “exculpatory evidence,” he should send it along, and that Democrats are "on a path" when it comes to impeachment.

But Republicans brushed off the meeting on Thursday, arguing that Democrats are all bark but no bite on impeachment, making a fuss about “a simple procedure issue.” Rep. Doug Collins, R-Ga., compared the Democrats’ move Thursday to a “giant Instagram filter to make you appear that something’s happening that’s not.”

“The difference between formal impeachment proceedings and what we’re doing today is a world apart, no matter what the chairman just said,” he said.